837 Albums, so a relatively small library

This is a request for assistance on behalf of a Taiko customer. His original Roon core was on a Macbook and this is when he created a number of playlists (estimated around 15). There is a Roon backup made that does indeed contain the playlists. We have verified this by restoring this very backup on the Macbook Pro. We now want to migrate his library (and most importantly the playlists) to the new server. Moving the music itself has already been done but it’s migrating the playlists that is proving to be an issue. When restoring the backup on the new server, nothing unusual happens and all seems to be going as it should, but the Playlists section remains empty.

There is only one Roon account and the user login is the same now and then. However, the owner does have two differently-named user folders in MacOS.

We have tried this migrate/restore process two ways.

First, we tried it by making a new backup on the Mac to a different User location folder than the original one and then copying the resultant local RoonBackups folder to the server’s D drive over the network (with Roon disabled) and then moving it to the server’s C drive, from where we restore it using the regular Roon restore backup functionality.

In both cases, we confirmed the dates and are positive that we were using the correct backups to restore. In any event, either method results in no playlists. What could be causing this? Any help would be greatly appreciated.

Are these playlists made up of streaming service files or local files?

First thought would be if streaming are you sure they logged into same streaming service account by same username.

It could be a profile issue. Look and see if Shared playlists are ON, as in the pic below. 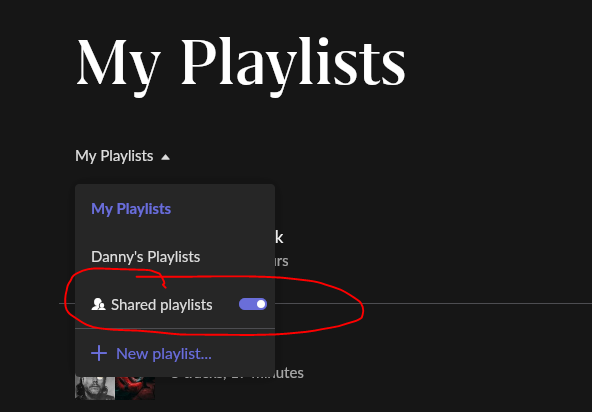 Thanks, Rugby. We have the same Roon user login on both Cores so I wouldn’t think this will be the issue but it’s a good suggestion ands I’ll look into it.