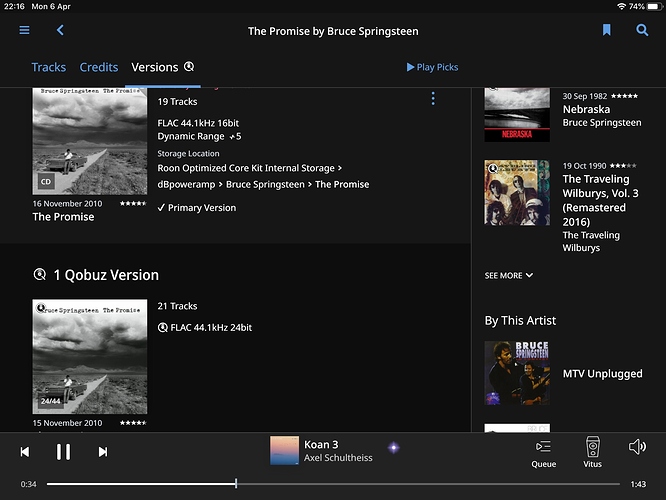 @ACvitus Do you have other remote devices to use? I’d be curious as to whether or not another device has the same issue. We attempted to replicate the issue you’re experiencing, but we aren’t having it on our end.

I just repeated this on my Win 10 PC with the same result. I deleted the Qobuz version of Bruce Springsteen’s “The Promise”, then selected my local copy, and via the versions tab, found the Qobuz version (matched per the screenshot above on release date). I was able to add the Qobuz version to my library, but then no option to make it Primary. Now at the Artist level, both versions are showing separately, but when I click on the local one and go to Versions, the Qobuz is present, but with the “make primary” option missing, just as I found on the iPad. 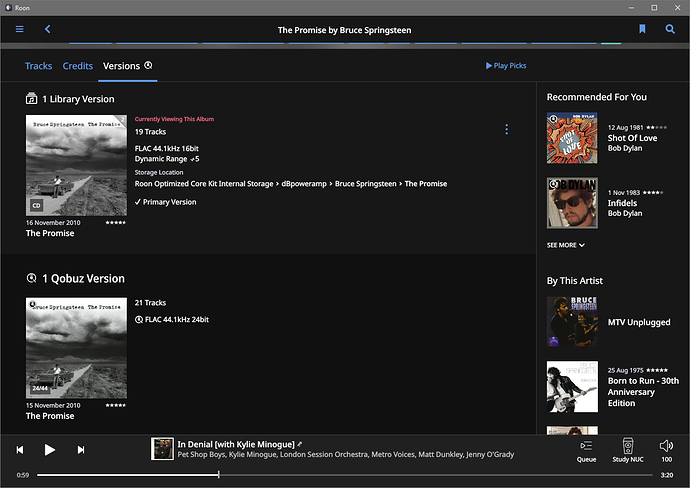 this second shot shows that according to the library view, the Qobuz version has been added. 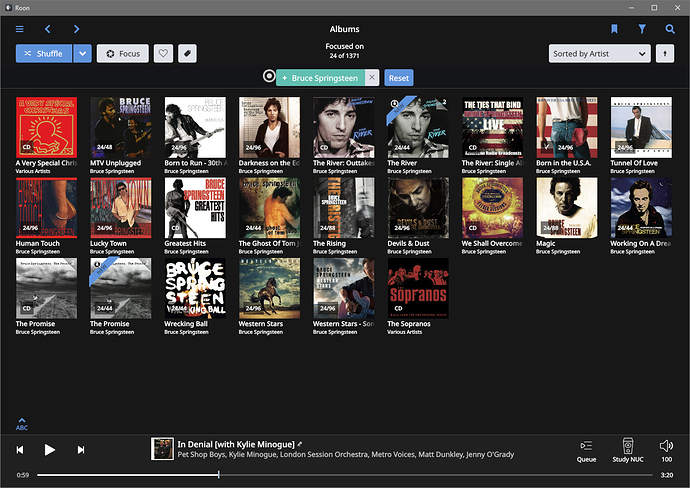 I want to give this thread a bump since I am continuing to find that when I add Qobuz albums to my library, Roon is failling to intelligently match to the same album in my local library and identify a single primary version. It almost never works.

Here is an example from today. Album: Rolling Stones “Bridges to Babylon”. Local library version from original CD rip. I add the new 24-bit release from Qobuz. I end up with two versions of the same album. Issues are the same as those reported earlier in the thread but still not resolved.

Look at this screen shot. Two versions of the album showing. 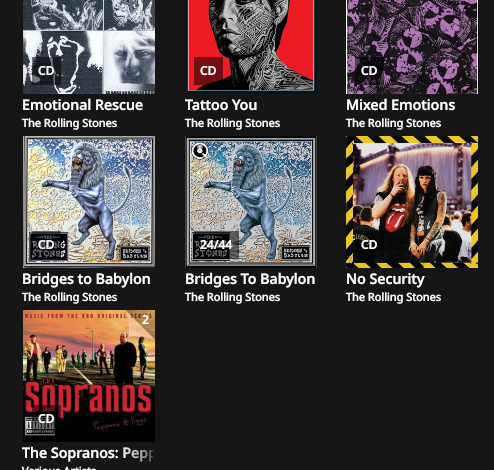 I now click on the local version and get this - note how the Qobuz versions are identified alongside the local version, but there is no option on the 24-bit version to make it primary, even though it is in the library. 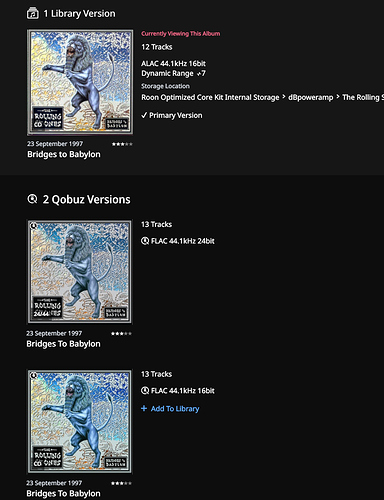 If I click on the Qobuz version, I get this, indicating no awareness at all of the local version, contradicting what we saw above. 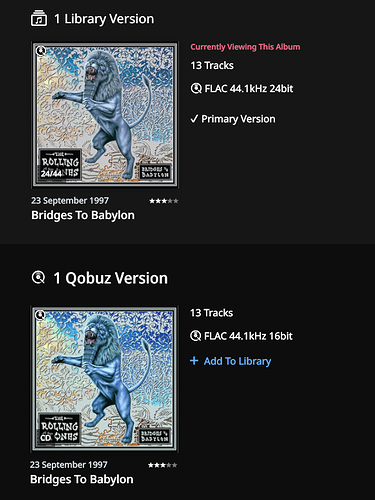 There has to be a bug here somewhere? Managing Qobuz additions with local duplicates has become really tedious with Roon, as I have to hide the local versions manually. I don’t think I had this problem when I had an extended trial with Tidal.

I’m surprised it did an equivalence as your local has 12 tracks and the Qobuz 13.

It’s quite common for my local rips to have a small number of tracks deleted if I know I dislike them. Could this be tripping up Roon?

Yes as it will take number of tracks into account, seperating normal from bonus releases for example.
For Roon you would be better to rip all the tracks then double click the heart next to each track you don’t like which will exclude them from play.

I’ve had single-track iTunes downloads where the Qobuz album match/auto primary works perfectly, so I don’t think the track count is a complete explanation.

In any event, in the examples above, Roon has clearly identified a match between the Qobuz 24-bit version and a local copy. But it is not offering me an option to make the Qobuz version primary. I have a tough time rationalising that logic.

Yes it’s got it’s pants in a twist there. It would be interesting to add the missing track back in to your local version, reidentify it and then see what happens.

The option to “add to library” is showing on the Qobuz version, this indicates it hasn’t been added yet. Very odd since it shows on the list on the previous screen unless that’s just a search window. Try adding to the library and see what happens. Also for Roon to show duplicates together, go to Settings>>General and make sure “Show hidden tracks and albums” is set to “No.”

But the 24bit Qobuz version is in the library in the second screen and is showing as the primary version. So why isn’t it in the first screen?

I am just re-posting this screenshot that I posted earlier today. I have already added the 24-bit version of Bridges to Babylon to my library (with no invitation from Roon to make it primary instead of the CD version from which I found the Qobuz link to the new version). The 24-bit version now shows up in my album view. But if I click on the Versions tab of the CD version which remains separate in my album view, I get the following. Note the extremely unusual feature of the first of the two Qobuz versions: there is neither an option to “add to library” (since I already added it to my library) but nor is there an option to make primary, even though Roon has clearly matched it. I have found this on countless titles. Something seems very wrong here. 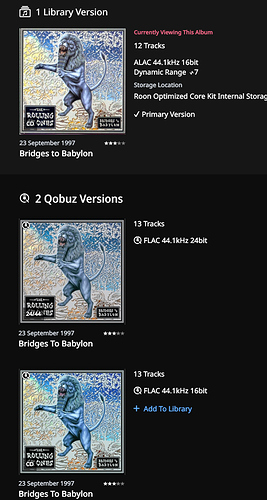 per the suggestion from @ged_hickman1 I dug out a CD for an album that was getting scrambled version linking when adding the Qobuz version to my library, in this case Sticky Fingers. My local copy did not have the track Brown Sugar as when I ripped my library years ago, I cleared out duplicates that matched compilations, though if I were to start again I wouldn’t do that.

As with the examples above, adding the Qobuz new 24bit version created scrambled version linking, i.e. both versions show in the main view (with hidden albums set to hidden), yet the Qobuz version is showing as linked to the local copy without an option to make it primary (as above with Bridges to Babylon).

I re-ripped Sticky Fingers, retaining all tracks, deleted the album from Qobuz then added the Qobuz version again, and the “make primary” feature worked.

So it does seem that Roon is tripping over missing tracks. But at the same time, it’s clearly getting the version linking messed up in some way, per the examples above. Maybe this gives a lead on how to fix this.

Now this is interesting: in my previous post I mentioned that with a complete local copy of Sticky Fingers, the “make primary” function worked correctly when I added the 24bit Qobuz version. This is only true for the 10-track 24bit version. If I delete that and instead add the 24bit version with the bonus tracks, the make primary function does not work and I get the scrambled linking again. Look at the 20-track Qobuz version at the bottom of the screen shot: no “add to library” and no “make primary”. Struggling to see how this could be intended behaviour of Roon for this situation. 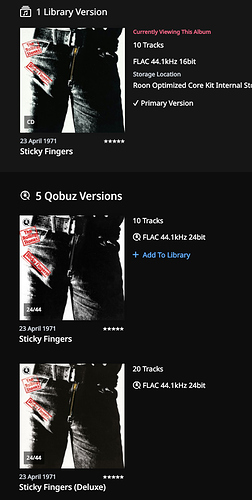 Just noting this is still not fixed in 610. Would be good to hear from Roon Support to advise whether the flaky primary album behaviour described in this thread is just how it’s going to be, or whether there is any prospect of a fix.

If you can re-read my previous few posts you’ll see the issue. I am adding a second version to the library, but when the version is added, typically there is no option provided to make it primary, and links get a bit scrambled. The posts regarding the Sticky Fingers album highlight this perfectly.

But it still says 1 library version. You can’t choose until there are two or more versions in your library. 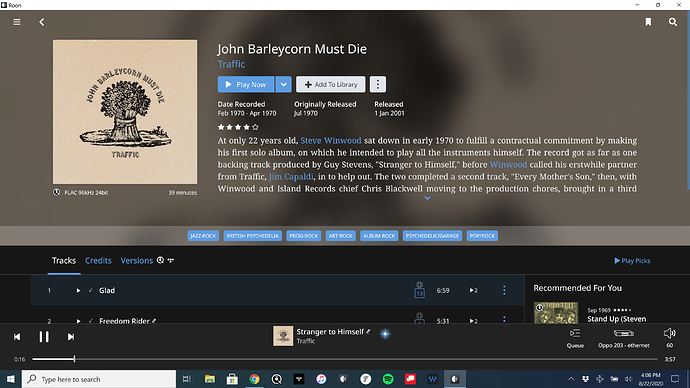 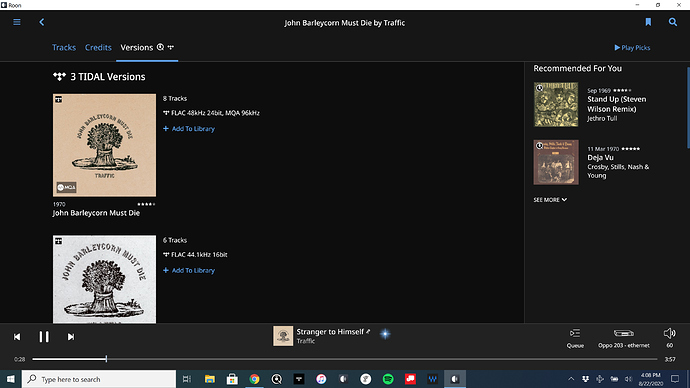 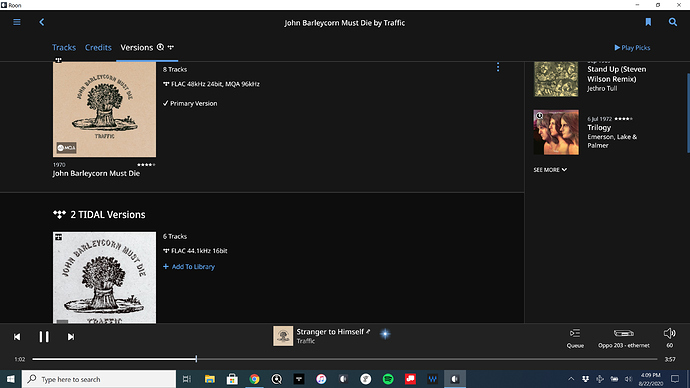 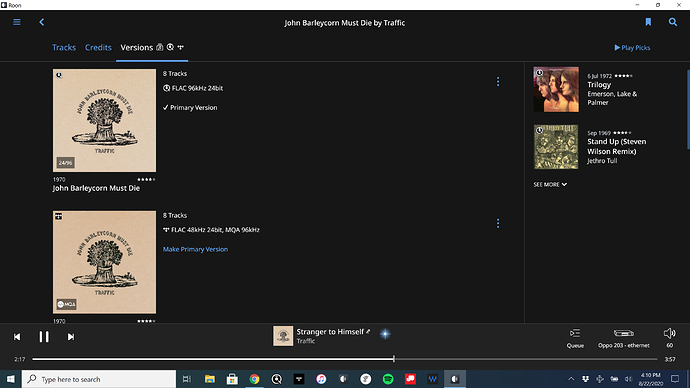 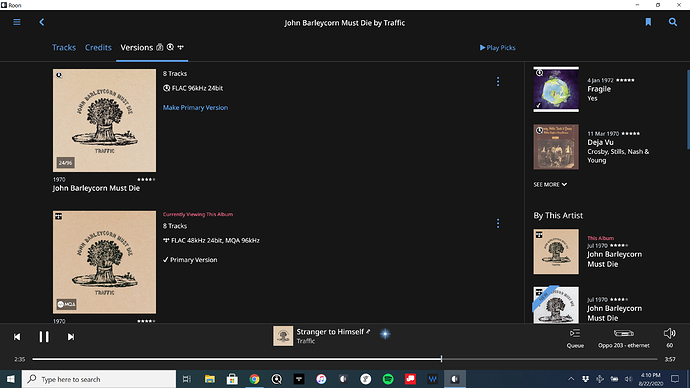