At one point, Maine public radio was playing but now it will not.
URL: http://opml.radiotime.com/Tune.ashx?id=s88374&partnerId=16

Error: Playback was interrupted because a track failed to load
Has anyone successfully streamed this station?

I have 7 other stations that play without any issues, although one takes
over 10 seconds or so to begin…

Hello @Hong_Son , I can play this station without problems.

Are you using Roon’s database version of the station, i.e Maine Public Radio, or your own?

That Tunein link you posted won’t work as it redirects via a form which causes Roon problems.

Use Roon’s version. (Use the magnifying glass to find it is the easiest way)

Yes, it is a TuneIn url which works on LMS.
But just now, I did find the station in Roon and it is streaming fine.
I have several other TuneIn stations that stream ok, so I don’t think
that’s the problem. For example, this South Carolina Public Radio station is nowhere to be found in Roon, but streams ok.

Most Tunein URLs are OK - it’s just one or two, and specific to Roon.

(I’ll add that SC one shortly…)

I’ve also problems with interruptions. So, I searched with ethereal in my network and found following:
Radio Stations from Germany called Chill in zone, chill out zone and Chill out zone: plus(FLAC) are hosted on hetzner.de cloud server. These servers are not well-connected to my provider network (Vodafone Germany). That’s why the streams stalled every 10 - 20 minutes. It has been seen on the ethereal protocol. More and more lost packets, no resend… stream stall. Roon shows then: 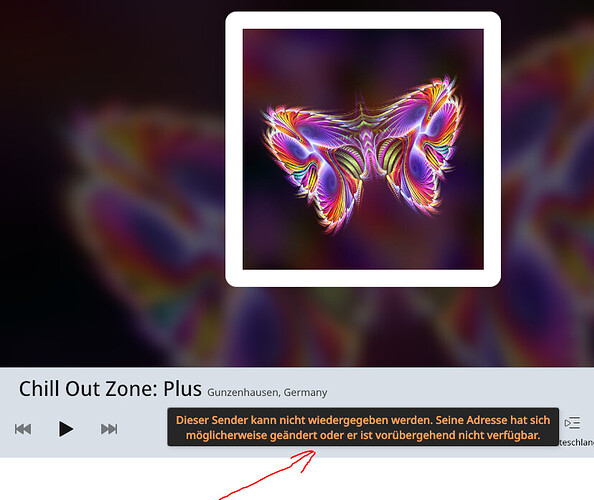 grafik829×697 112 KB
After a while you can start the stream again, but it stalled again.
So, I search now for a provider that is much better connected to the global internet. You can check this very ease. Check the Internet address from the radio station and trace this address. In that case you will find some hubs with time outs.
I checked hetzner.de on a Telekom (Germany) network and no such time-outs were found.
Conclusion: many streaming problems from outside sources (Tidal, radio…) found on the core net from the provider.