About an hour ago, I added about 33 albums (Schubert Quartets) from TIDAL, and they all suffered the same affliction: while they were nominally IDed by Roon, none of the contents (tracks) were linked to any compositions. BTW, this is the universe of Schubert Quartets in TIDAL’s library.

What troubleshooting steps should I take (and in what order) to facilitate the IDing of the contents of these TIDAL albums?

PS: While I don’t know the age of all of these, I think it safe to say that the majority have been around for several years.

Sometimes (but not always) it helps to re-identify a TIDAL album within Roon after it’s been added. For example, I searched in TIDAL (via Roon) for “Schubert quartets”, and added the first album in the results: 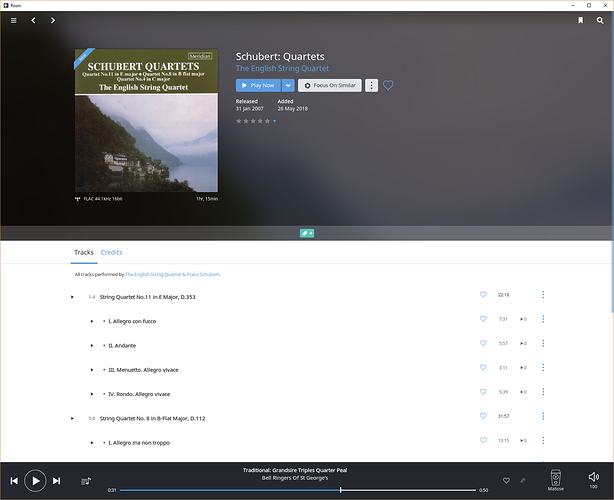 It looks as though it has recognised compositions, but when I go to the Compositions browser, they don’t appear: 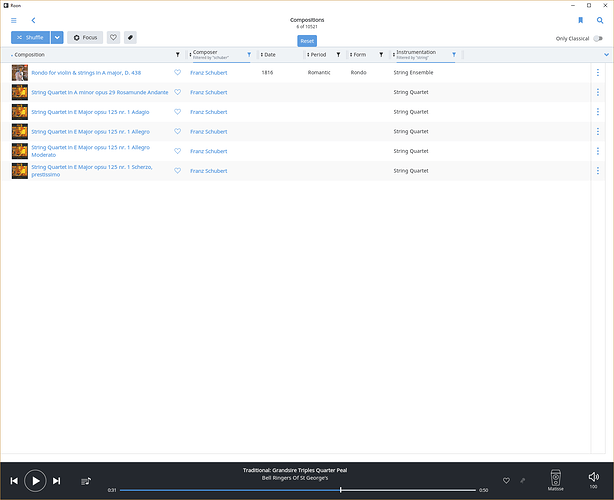 What I then did was to re-identify the album, and found that Roon knows about two versions: 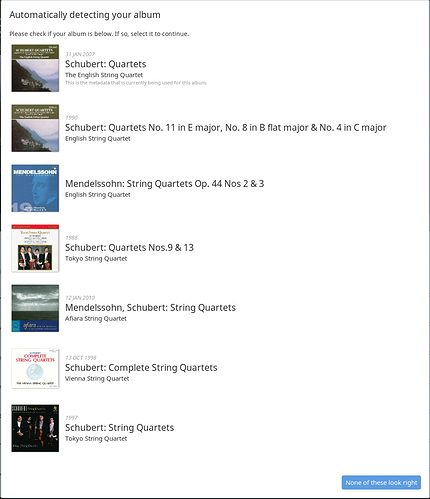 I selected the second version, and this one seems to have Composition metadata: 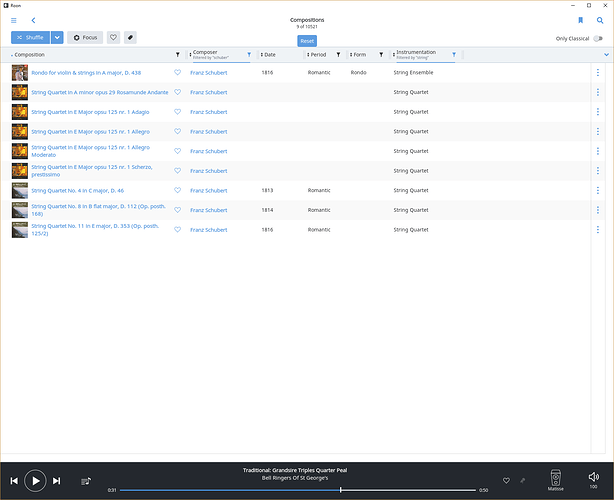 It also cleans up the Album view: 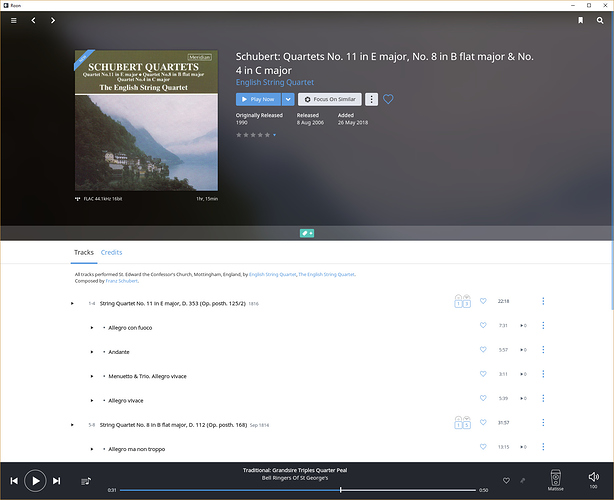 As I say, this technique of re-identifying the album doesn’t always work. For example, here’s the second album of Schubert Quartets from TIDAL added to my library: 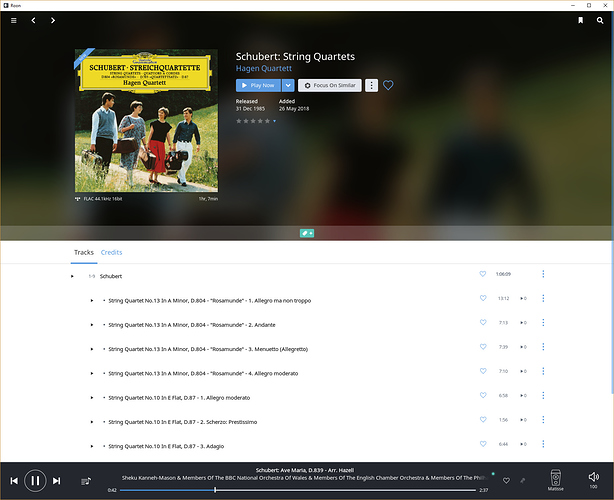 No compositions are recognised at all, not even in the Album view. Re-identifying the album doesn’t help, because there are no alternative versions, and it looks as though there is no Composition metadata associated with the album: 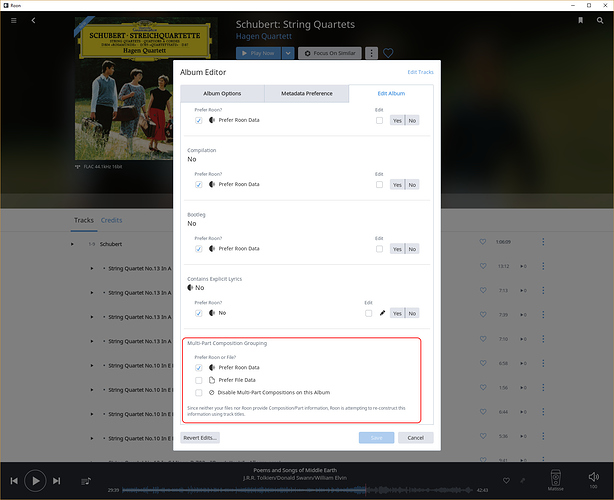 I suspect the only way this can be improved is to flag such albums to Roon ( @joel ) . Because these are TIDAL albums, there is no local metadata that can be tweaked using a metadata editor to give Roon a helping hand.

@joel @Geoff_Coupe I think you are on to something, but perhaps not as you describe. I do not think the two Albums are different versions, e.g., “CD” and “Vinyl”. Rather, they are the same version, with one being some kind of shadow of the other.

Here’s another example from the same crop of albums I imported from TIDAL. Here is how one appeared after the addition: 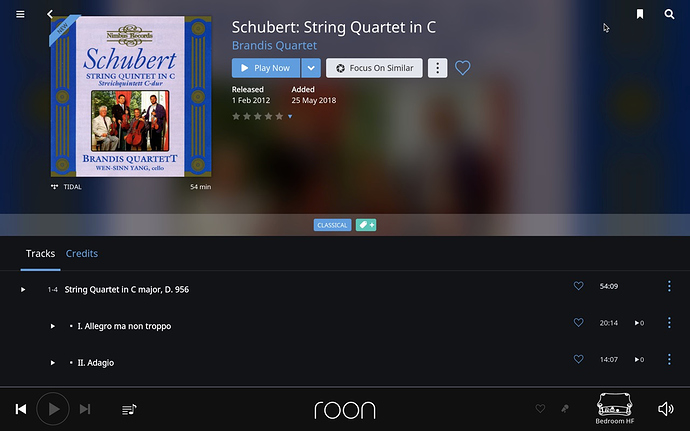 Note the Feb 1 2012 release date. Also note the absence of an ID for the composition “String Quartet in C major, D. 956”. Now let’s try to re-ID this album. At the start of the process, we see this: 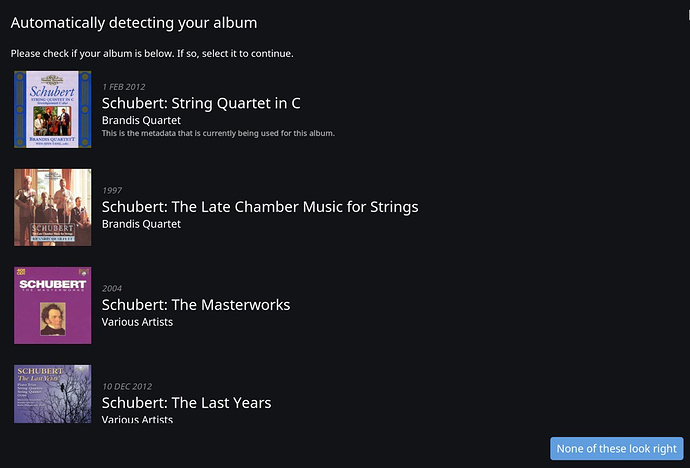 At the top, we see the chosen album, and if we click on that, we will see the current set of IDed contents. Look here: 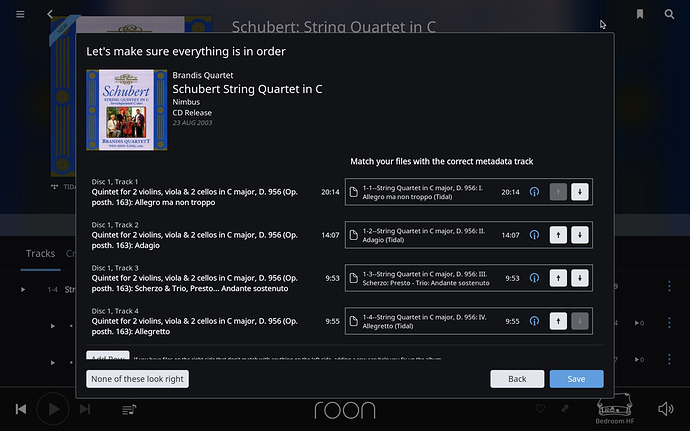 While all seems well ordered (correct times), look at Tracks 1-4. The ‘String Quartet’ is actually a String Quintet. But same opus, movement name, and time. And, if we were to re-select this match, the same result would take place (not shown). Namely, the quartet would remain and un-IDed quartet.

But if, instead, we scan farther down the list of possible album choices, a second “version” (loosely used) appears (too much vertical distance to display them both on one screen): 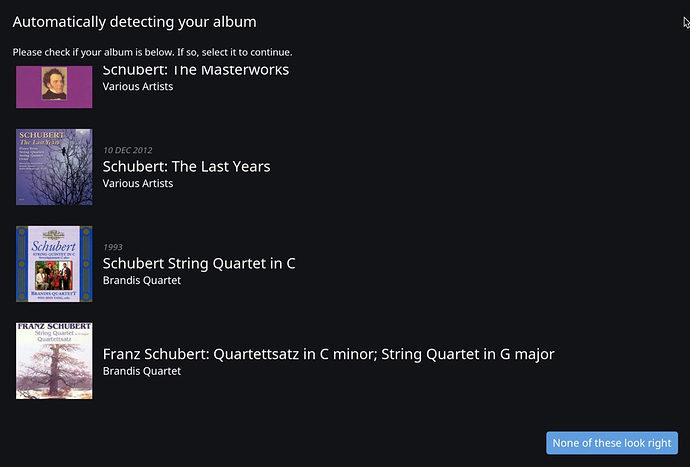 Note this one has a Date of 1993 on it, but appears otherwise to be the same. If we were to select it, here are its details:

Notice that these details are identical in all respects to the first “version” shown earlier (only the background changed slightly between photos). Even the date is the same (curiously, 23 AUG 2003).

BUT, there is one major difference. When we select the second “version”, the compositions are now IDed as shown below: 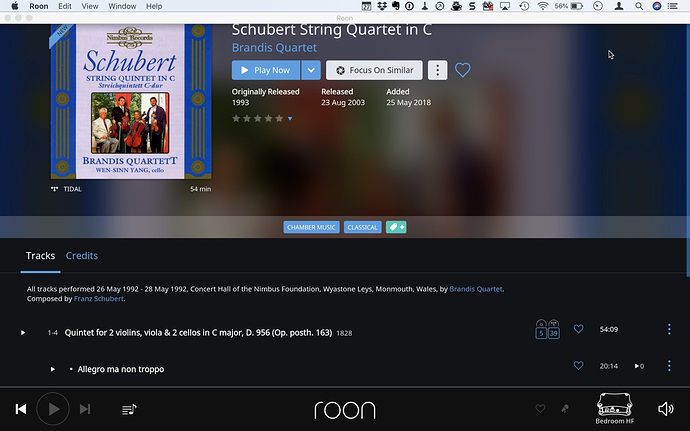 My inference: Faulty, phantom, or multiple database pointers are being created in the importing process from TIDAL to Roon. This could explain why all 33 albums failed to truly ID contents. It may also explain why users (myself included) have found duplicate identical Artists in their libraries.

I’m calling it a bug.

My inference: Faulty, phantom, or multiple database pointers are being created in the importing process from TIDAL to Roon.

I’m sorry, but your inference is completely wrong.

This could explain why all 33 albums failed to truly ID contents.

No. It’s simply a question of album equivalence and limitations in the current code, which is doing exactly what it was written to do. By album equivalence, I mean the very tricky process of determining that two or more albums (from one or more metadata providers) are the same thing without creating false matches.

In this case of this Schubert album, unfortunately, we’ve not been able to determine that your TIDAL addition (with poor metadata) is the same as a non-TIDAL album (for which we have excellent metadata and would use if we made the match); there happen to be two other TIDAL versions of this album for which we do make the match.

When you use the identification wizard and find other possibilities, you sometimes see potential matches which our metadata providers have told us are different albums, but are in fact essentially the same thing re-released or re-marketed with a different cover/title/etc.

The following are actually the same album (which is reasonable given the different cover art and album artists, so long as the metadata are good), but they are not equivalenced, so you can find them both as metadata possibilities. Note that one is apparently a quartet and one a quintet, both performed by a quartet…

The same quartet/quintet confusion is happening with the TIDAL albums.

It may also explain why users (myself included) have found duplicate identical Artists in their libraries.

No, not really. It’s equivalence again, but this time artist equivalence. For example: figuring out that TIDAL’s “Jörg Baumann” is the same Jörg Baumann as Rovi’s “Jorg Baumann” and other metadata providers’ "Jörg Baumann"s. Sound easy? Try it with “John Williams” or other artists with the same name.

I’m calling it a bug.

, but what it actually is, is a limitation in the current equivalencing code: a limitation that we’ve recognized, that we’ve invested a considerable amount in fixing, have been working on for some time, and which we will release to our metadata backend as soon as we can. Please bear in mind though that major changes in code, such as this one, affect all Roon metadata; we simply can’t release something that is not ready or hasn’t been thoroughly tested.

Joel, your explanation example uses albums with two different covers and considerably different names. My two matches have the same cover and title (except for a missing colon in one). I don’t think yours is the same issue I wrote about but perhaps its because I don’t understand the program logic.

Also, you seemed to sidestep the significant issue. As I said in my first memo, I imported 32 or 33 albums from TIDAL based upon the search, “schubert quartet”. I think I’m correct in saying ALL 32 were IDed at the album level by Roon, and NONE of the 32’s contents were IDed (i.e., linked to metadata) by Roon. Are you saying that there were 32 different cases of poor album equivalence? That would be a stunning coincidence. Bear in mind these 32 albums are from different labels and have different artists (at least 23 different quartets), album contents, and titles.

The ironic part of this exercise was that the original intention of importing all 32 was simply to induce recognition of the Schubert compositions, only to find that none of TIDAL’s compositions were recognized.

No. It’s simply a question of album equivalence and limitations in the current code,

Well, you can call it what you like too.