Thanks for the bump – missed this one. Let me confirm I can reproduce what you’re showing here and we’ll follow up about whether there’s a bug here.

Thanks for the bump – missed this one. Let me confirm I can reproduce what you’re showing here and we’ll follow up about whether there’s a bug here

Thanks Mike. Much appreciated.

Thanks for this idea. Just done it and randomness is restored.

Let me confirm I can reproduce what you’re showing here and we’ll follow up about whether there’s a bug here.

I can reproduce, and its a bug, and it’s fixed for our next release.

Just keep in mind that when you tag an artist and then “view all tracks”, it will be looking for that artist to be credited at the track level.

In most cases, that’s going to work like you’re expecting but there are some examples (whether due to bad metadata, or for example, because it’s a DJ mix where the album artist didn’t actually perform the song) that won’t show up in the Tracks view in this case.

Thanks for the report @James_I!

I can reproduce, and its a bug, and it’s fixed for our next release

Woo-hoo! I haven’t identified an actual bug in software since I founded a dot-com 20 years ago. Thanks Mike - glad it’s a bug and not intentional, because Tags will be much more functional for me with that fixed!

I know - and appreciate - that this is being worked on and I don’t need to bang on about it. But I’ve just found a track that Roon has a bigger fixation about than poor old Vashti.

On the other hand, ‘Play All’ does bring some nice tunes to the table that I haven’t heard for a long time. Otherwise, I’d have changed my listening habits (like turning off Radio) and waited for the fix.

Looking forward to that.

Looking forward to that.

Me too. Where I find the current Roon shuffle behavior most frustrating is when going back to some pre-determined selection (like a Tag or a Bookmark) and it seems to follow a similar pattern to the last time I listened to it.

In other words, if you just let a Tag or some other “Play All” play for a long time, Roon does dig deeper or at least the pattern becomes less obvious. But if you, say, play music to work to during the day, then music for happy hour in the evening, then music to work to again in the morning, etc. etc., then each time you switch back to that prior Play All selection, the pattern becomes more obvious. It’s a little like a conversation with my 93 year-old mother.

Roon really loves Angst In My Pants by Sparks, and always plays it within a few songs of starting my Valley Girl Soundtrack Tag, for example, even though there are 400-500 songs in that Tag.

EDIT: I will also add: Roon tends to have a heavy focus on “best of” albums over the actual album releases with the same track. The issue there is the album release version is much more likely to be remastered, high resolution, or some other superior version.

EDIT: I’ve been harsh on the shuffle function when I thought it was fair. I should praise when fair. Playing tracks similar to David Bowie the Man Who Sold the World, Roon Radio has selected some excellent tracks.

I can reproduce, and its a bug, and it’s fixed for our next release.

Was this supposed to be fixed in the new release from today? It’s definitely not fixed - it behaves differently, but not better. Instead of bringing up a subset of the tracks associated with the artists that are Tagged, it brings up almost every track in my library.

Here’s a screen cap of the focus on tracks within the same Tag as screen capped above: 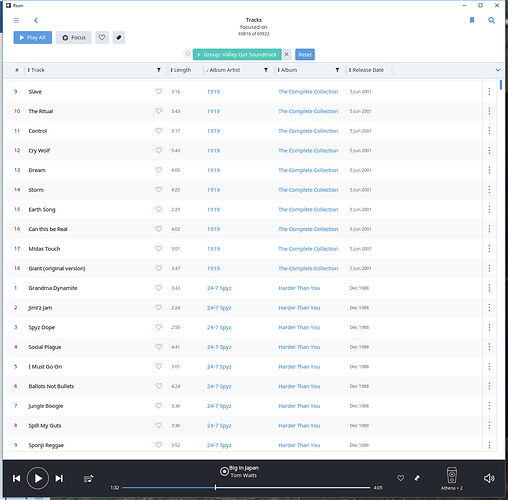 There are definitely NOT 69,816 tracks associated with the artists that are on the VG soundtrack.

Any progress?
I’ve been hoping for an update…

In another thread, the Roon team says “very soon” on improvements for shuffle and other automated DJ features.

Thank you all for your patience. Shuffle and Radio have been the subject of active development and I think I can say that development is “well advanced”.

I see it’s nearly a year since this thread started, and the issue certainly pre-dates that. Time flies.

I do like the “intelligent” shuffle that tries to preserve a kind of continuity, though as several have noted it tends to select the same tracks again and again. What is requested is an option to override this and get truly random selection across the whole collection, including within multi-part items.

The new shuffle in 1.4 works very well. It seems to be a truly random shuffle. Thanks for adding this option. Happy new year!