I have a DSD256 5.0 album that I purchased and am unable to play it on my Nucleus+. It will start to play fine but then breaks up and stops with a message of “a file is loading slowly.” Initially the album resided on my Netgear ReadyNAS 516 with the rest of my music. I copied the album to the Nucleus+ internal storage (it was 33GB and took about 8 minutes.). Set Roon to monitor the internal storage of the Nucleus and forced a rescan. Tried to play the album again but got the exact same thing. So I take it that Roon can’t handle this size of file?

I have noticed a general slowness since installing the Nucleus+. Like when I press play it takes about 10-15 seconds before I hear anything. When my core was on my PC playback would start almost immediately. And it seems like I spend a lot of time staring at the Roon logo while the software is trying to do something. I was hoping that with the Core I7, and a dedicated operating system that the Nucleus+ could handle just about anything but maybe not?

But there are other factors that come into play along the way - for example, the Nucleus itself may not have a fast enough CPU to handle the playback, or the connection to your device (via USB? or via WiFi? etc.) may “choke” on the required bandwidth, etc.

Roon can handle it and, indeed, the Nucleus+ can play it but I question whether you should have tried to copy it to the internal storage of the Nucleus+. It has limited storage capacity and is meant to play your library but not necessarily to store it. Is there a reason that you did not play it from the NAS as you have in the past?
In my experience, using music files stored on my NAS: "Bit-perfect playback of multichannel files at all bitrates up to 24/352.8 PCM or DSD256 was just fine. " Read more at https://www.stereophile.com/content/music-round-96-roon-dolby-atmos-page-2#ag95x3qjpH20p2fH.99 Of

I did try to play it from my NAS initially and only copied it to the Nucleus+ to see if maybe my network was the issue. It wasn’t as I got the exact same behavior from the file played locally as the file played over the network. I have played FLAC files at up to 192 kHz, 24 bit 5.0 to my device (Trinnov Altitude 32) from the NAS with no issues. Roon was converting the DSD 256 file to 176.4 so it seems that the Nucleus+ is having trouble with the conversion. I paid extra to get the Nucleus+ with the Core i7 to make sure I had enough processing power but doesn’t seem to be working out too well.

Roon was converting the DSD 256 file to 176.4 so it seems that the Nucleus+ is having trouble with the conversion. I paid extra to get the Nucleus+ with the Core i7 to make sure I had enough processing power but doesn’t seem to be working out too well.

Yup. Read my review at the referenced link.

Do I need a new NUC? Support

8th generation CPU will be faster. However, I have some doubts whether NUC8i7 can bring your processing speed from 1x to the absolute minimum 1.3x. Check out the single thread benchmarks. If I were you I’d just build a desktop i7-9700K with a cooling fan designed for overclocking.

Do you have parallize sigma delta turned on? What is the processing speed indicated in the audio signal path showing!

I was able to download the DSD256 stereo version of this album and it played fine. Processing speed was 3.3.

I had a DSD128 5.0 album that I played and it played fine too…processing speed on that was 1.4 however. But that seemed to be adequate.

Just the other side of marginal.

If you read my report on the Nucleus+, you will see that you are pushing its limits with 5.0/DSD256 and you have no margin for error or for the effects of other processing.

I’m not sure what is being represented by the processing speed when parallelize sigma delta is turned on. Normally, it shows the usage of 1 Core for Roon Processing.

Do you have parallize sigma delta turned on? What is the processing speed indicated in the audio signal path showing!

I’m not sure what is being represented by the processing speed when parallelize sigma delta is turned on.

In short, DSD to PCM conversion in Roon appear to be always a single threaded operation.

I think perhaps you did not really read what I wrote. In no way did I suggest using the Parallelize delta sigma modulator option for anyone in this thread. My entire post was musing what the processing speed indicator represents when that option is turned on vs what it normally represents. I then go on to present the actual % core use values referencing the other posters in the thread.

I could assume that the option does not have an effect on the processing speed indicator, but, I was hoping to have someone who knows the back end coding jump in and tell us for sure.

I do was more interested in the Processing speed that was indicated…I just asked if PDSM was on as a matter of interest. As he did not appear to upsampling then it “shouldn’t” matter - but maybe it might…I’m not sure we really know enough about how this option works in other situations.

To the best of my knowledge: 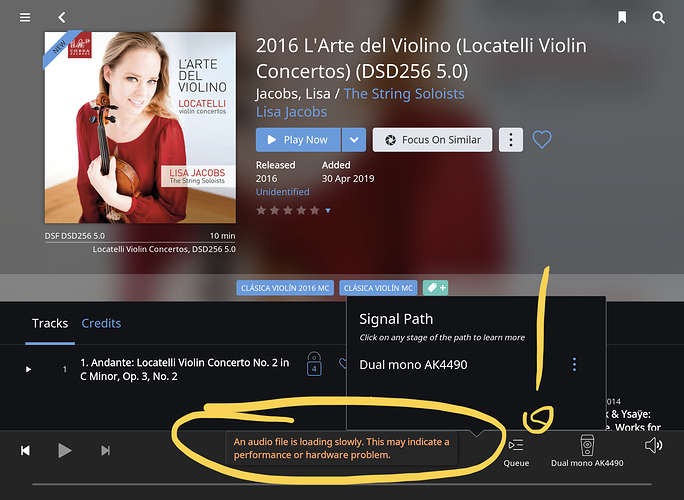 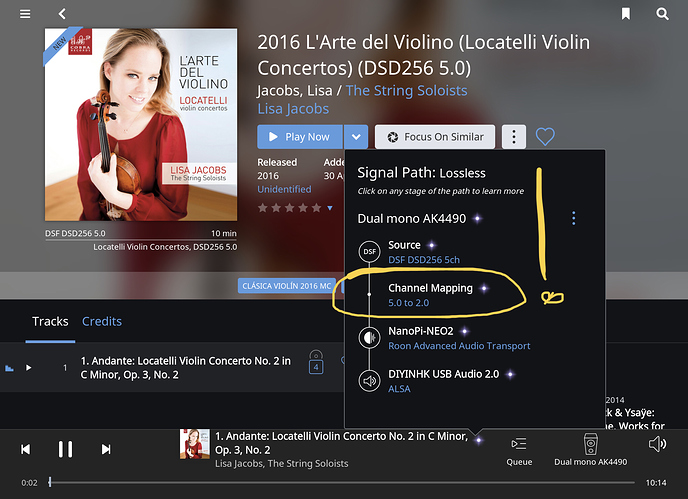 But the stereo version is played without problems. 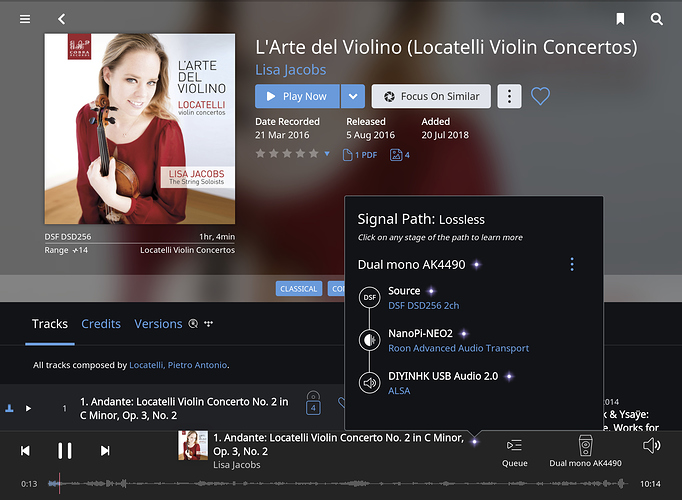 But the stereo version is played without problems.

Of course. The 5.0 datastream is 2.5 times as large (5.0 divided by 2.0) plus there is additional processing overhead encumbered to down-mix it to 2.0.

Make sure Native DSD proessing is disabled. Your Roon Core CPU is probably too slow - what are you using? NUC7i7DNHE?

what are you using? NUC7i7DNHE?

Yes. It will be necessary to check the CPU load in htop and bitrate in local network during streaming file from NAS.
Also, I don’t understand how five tracks can be edited in two without intermediate DSD conversion (in PCM, in wide PCM, etc.)

To reduce CPU load. I cannot find the original posts now, but I clearly remember some members tried to enable it while playing DSD music with DSP processing ran into CPU performance problems.

Well. DSD256 5.0 is played normal. This file is in NAS, Roon Core on NUC get it from NAS via first ethernet card (enx00e04a) which connected by patch cord with wifi router, then Roon Core transfer dsd256 2.0 via second ethernet card (enp0s31f6) to endpoint (ethernet DAC). The load of CPU is minimal.

Initially, the problem was that not only the stream from the NAS was transmitted through the patch cord from the router through the first network card, but also the stream from the Internet (obviously, some information was downloaded from the Internet by roon core) and the bandwidth of the network card ( 100 Mb) did not enough.
Again @brian , I propose to make the file would cached on the system disk, not only when playing from Tidal / Qobuz, but also from the NAS. That would be helpful!