I’m trying to understand the best practice for multidisc sets. One example is Alan Parsons - The Complete Albums Collection. I do have this set, and also the separate albums, so it makes sense to have the set as an album as shown below. I understand that it has been discussed to have the album title shown on the tabs instead of Disc 1, Disc 2, etc. but until that is implemented, is there any way to have the sub-album name somewhere? It’s a bit disturbing not being able to see what album the individual discs represent. 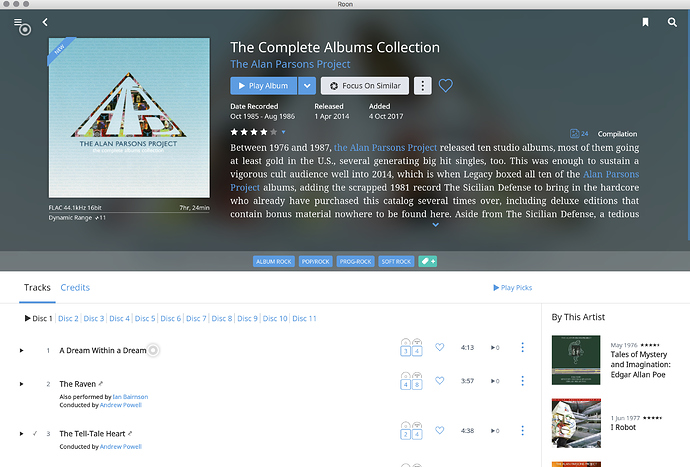 Sorry, but no - that is not the case. In my example, Disc 1 is actually the same album as the one on the right hand side Tales of Mystery and Imagination: Edgar Allan Poe, Disc 2 is the album I Robot, Disc 3 is album Eve etc. That is the case for many Rock album boxes I have with artists like Isley Brothers, Kent, Dream Theater, Sufjan Stevens and many more. I like having them grouped together in the box, but it’s kind of annoying not being able to see what album a disc is.

I am the opposite. If the box set is just a collection of the original albums, then, I want to see them as separate albums which I then note as coming from a box set using the “Version” field.

I understand and I think there should be room for both approaches!

I like the box-approach since the box will have its own cover art, liner notes/booklet etc. that applies to the entire box, but isn’t really relevant per album/disc in the box. The individual albums/discs in the box often have separate cover art per album/disc which is the case in the Alan Parsons example above.

Maybe the choose option: show as a box or separete albums would be the best solution? I prefer the box view, althougt the album title parallel to disc number would be a great enhancement.

Subject to metadata availability, I agree. This is something that we’re aware of and are working towards. One of the problems though is that, almost by definition, metadata from a different release needs to be pulled and massaged into the more recent box-set release. This isn’t easy and we need to make sure that it all makes sense.