Roon has a picture of the Australian singer/songwriter with the bio of the American Paul Kelly. 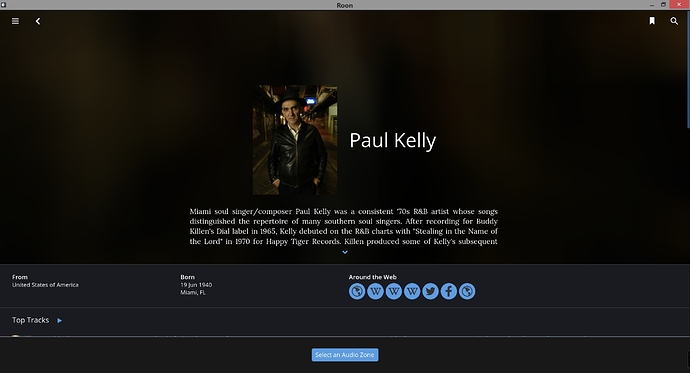 Any progress with this one @jeremiah ?

Paul is living national treasure status in Australia, likely to be in the library of any Australian Roon user interested in popular music and has links to many other musicians; so iit kind of sticks out. Think Bruce Springsteen.

A third musician, Paul Austin Kelly, appears to be mixed in as well.

The project to address the issue that underlies conflating performers like this is on the calendar but significant (i.e., coming soon but not very soon).

Since he’s a living national treasure, heh, I’ll see if I can get this particular artist sorted out as a stop-gap measure in the meantime.

Actually, I have to take that promise back. Fixing this is too complicated for a quick hack. The problems are at least two-fold: two of our metadata sources mix up the artist attributions for albums by the various Paul Kellys, and Roon code which confirms the equivalence of performers is not able to distinguish them.

I’ve added this case to the list to be addressed and will make it a priority.