For a long time, I couldn’t figure out why I had so much trouble finding things in the Roon UI. I finally stopped to think about it, and realized the problem.

Quick! Where do you find “Recent” imports?

The answer depends on what OS you’re running on.

I accept that Roon is going to be developed with a cross platform framework, and I’m willing to suffer the non-native quirks because it’s awesome at doing what it does. But I don’t understand why the order of items in the Hamburger menu changes from OS to OS.

Can we please have consistent locations for UI elements? Particularly the main navigation menu item order?

It would make Roon that much nicer, in my opinion.

Agreed. I don’t understand why you have to click on More… on iOS in order to be able to pick album or artist view. Isn’t that one of the most common use cases?

Agreed! Since it’s a scroll anyway, what’s the point of “More”?

This is phones your talking about?
On my IPad, Android Tablet and Windows desktop its all the same. Recent imports are in ‘Overview’
I believe the UI is not optimised for phones as this is not the way to really enjoy the Roon UI to the full, it is a cut down version out of nessesity.
Just thoughts. Chris

I believe the UI is not optimised for phones as this is not the way to really enjoy the Roon UI to the full, it is a cut down version out of nessesity.

I would rather say “The UI is optimised for phones” in the sense that they restricted features that they felt would be too fiddly on the phone.

I find the phone fine, but for major things have to go back to the laptop. And that’s find by me.

I usually go either to Recent to find my new imports, or through Genres.

For now, let’s set aside which platform Roon is optimized for. It’s really a secondary concern. Instead, look at these two screenshots: 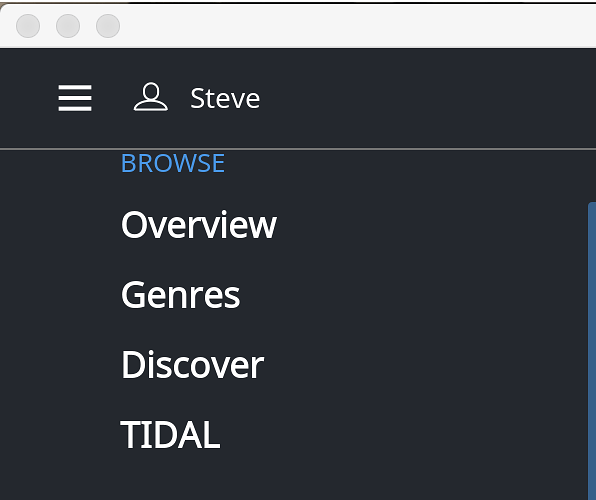 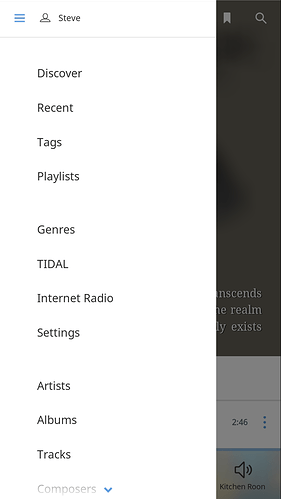 Where’s “Recent”? Second on iPhone. Not visible on Mac.

Turns out, it’s the content of the “Overview” screen.

What I’d really like to see is the same names used in the same places for the same things, regardless of form factor. I can learn a new vocabulary, but if it’s used inconsistently, it’s really difficult.

How do I make this a feature request? @support?

How do I make this a feature request? @support?

Does anyone remember the continuous requests for an iPhone app and the Roon said they didn’t want to do one as it would not be as good as the other controllers. Eventually they gave in and gave us a reduced function app as it was the best fit for iPhone!!!

While the Phone app is not where it can be (and eventually will be, I believe) – it should not aim to be a carbon copy of the full remote (desktop/tablet) as it’s obviously a very different device.

To current rationale is to put functionality that offers quick access to music first. It took a bit of getting used to – but I have gotten to like it quite a bit.

List-like browsing (even with an alphabet navigator) on a Phone UI is a nightmare in all interfaces I have seen so far. Quick search is a much faster way of navigating to a specific artist or album than scrolling can ever be.

That said, I’d love some TLC on the Phone app after the 1.3 frenzy has calmed down a little.

I agree with the sentiment of the OP though - no real reason to have menu’s in a different order, and no real need to press ‘more’ for menu option that could just be displayed in the first place.

Do you find yourself pressing that “more” often? I don’t.

If I want to look at Albums, yes.

But my complaint isn’t about the “More” button, it’s about the fact that the order of the items is different on my phone vs. my Mac. I’ll live with the awkwardness, so long as it’s the same awkward in both places.

Not often, but every time I want album view. It just seems like a pointless extra menu press really. What it hides would just otherwise be available at the bottom of the menu if you did need it, and if you don’t, having it displayed is harmless too. Why hide it? For anyone that wants those options (for whatever reason) why the extra click.

It seems to me they’re either useful parts of the app or not, and since they’re there and some people use them, I guess they are.

Not a big deal, just failing to see the logic.

I do…always looking at Albums. But that’s just me perhaps!

I am confused/fascinated by this. If you don’t browse by album or artist, what do you typically do? This is my primary way to select something to listen to…?

I don’t browse by album much. I use Discover a lot to give me an idea if I don’t know where to start. Then one thing leads to another.
I have some Tags to narrow things down. Example: Music related to the Music venue I help run ‘Live at Little Rabbit Barn’ is tagged.
All my archive live bootleg recordings are there along with albums from artists and prospective artists either locally or on Tidal.
Then another trick is to use ‘Tracks’ and use the hearts symbol to focus on your favourite tracks. Then just swim there.
New albums are easily found in ‘Overview’ and if all else fails, I can just search.
By the time I’ve done this lot it’s time to go to bed lol.
Thoughts, Chris

I"m with scirica. I only use album view to start my day’s browsing.