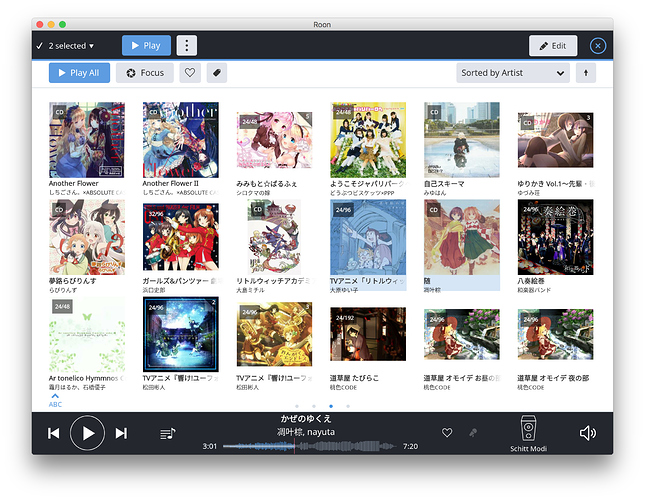 As shown in the screenshot, the selection box cuts album artist in half.

Hi @ases ---- Thank you for the feedback. I just checked to see if I could reproduce on my MacBook Pro and am not seeing the same results

Can you please provide the make, model, and specs of the device you are noticing this behavior on?

@Eric I’m using a 15’’ 2016 Retina MacBook Pro, but I think that doesn’t matters because the issue also presents on my iPad. After some tinkering I discovered that this issue is probably caused by CJK characters. See the screenshot below:

CJK characters are generally taller than ASCII characters, and that might trigger a misalignment. See the red lines, focus on letter ‘E’: Everlasting Songs is aligned at the same level as Elgar: Violin Concerto / Vaughan Williams: The Lark Ascending because they only contain ASCII characters, while EONIAN -イオニアン- is aligned around 2 pixels below them, probably because of the taller “イオニアン”. If both album title and album artist contain CJK characters, album artist would be shifted 4 pixels down.

Hi @Eric ---- Thank you for the follow up and the insight, both are appreciated!

Moving forward, I still had the previous sample of media you had sent over to me (addressing the file path problem) but did not notice this issue with it, and am noticing that based on the first screenshot provided in your original post you are not either

Would it be possible for you to send me one or two albums that you currently noticing this behavior with?