Unable to connect to ROCK on 1.7 via web browsers or Roon clients

Both ROCK and PC are physically connected to switch ports on an Acer RT-AC66R router.

Not sure why this is relevant at this juncture but: I have a Schiit Modi 2 DAC connected directly to the NUC via USB. On my PC I have a SMSL SU-8 DAC connected via toslink optical. I also stream to a Google Chromecast Audio.

Unable to connect to the ROCK core via different internet browsers on multiple devices and all Roon clients refuse to connect.
Connecting a monitor directly to the core I see the usual “splash page” with the Manufacture/Model/OS/Serial/Hostname and the “Roon can be accessed by… 192.168.2.206” message.

I am able to ping and tracert to this IP but web browsers get “Failed to load device state (Status:0) Please refresh”
On refresh I get "This site can’t be reached 192.168.2.206 refused to connect.

I’m able to access the internet and other devices on my LAN from my PC and android devices via the Acer router (192.168.2.1).

After the 1.7 update the Roon was a bit sluggish but I attributed that to the core scanning my almost 80K tracks. This went on for about two days before the connectivity issue surfaced. The NUC is running very hot, I can hear the fan clearly from approx 16 feet away. I’ve had no music via Roon for well over a week now.

Do you have a backup of your Roon database stored on a separate drive?

I would be interested to see if you could “restore” this database on another PC in your home to see if this issue is caused by the database itself. You should back up your PC’s Roon database before doing this if you’ve used it as your Core in some circumstances.

If you’re able to restore the database from another PC, this should allow you to simply reinstall ROCK on the NUC and restore your database on the fresh installation to get back up and running.

Thanks for the suggestion but I didn’t want to go to a backup because I’d seen this problem before but it never go to the point where clients couldn’t connect to the ROCK core.

To resolve the issue I started from scratch. It took the better part of two days but all tracks have finally been scanned into the database. I made a type-o in my initial request. I have over 800K tracks. At this juncture Roon clients are connecting normally and performance is fine. Immediately after the reinstall I could connect via browsers but not anymore. This is a minor issue and I can probably resolve it by connecting a monitor directly to the ROCK core and confirming its current IP address. I set it to a fixed address but it might have switched back to using DHCP. A ping sweep would probably work too.

It seems like you’re on the right path, let us know if you’re unable to figure out how to get connected to your core.

Symptoms included slow performance on clients, database rescanning, unable to connect to the ROCK web interface a few minutes after boot-up and finally clients refusing to connect. Due to the constant scanning the NUC kept overheating.

After extensive troubleshooting which included swapping hardware (I have 2 NUC 7 i5’s), updating the BIOS, reinstalling the Roon OS (numerous times); I determined that the issue was caused by a FAT disk corruption issue.

I finally gave up my housekeeping efforts and used the ROCK web interface to reformat the music storage drive. Once it completed I stopped the Roon server service via the web interface and copied all my music back. Once the copy completed I restarted the server service, connected via a Win 10 client and observed that the data was being scanned into the database. It has been 3.5 hours since I restarted the server and everything is functioning normally.

I believe this condition had existed for a few months and the 1.7 update came along and exacerbated the existing issue. My only customizations were a few seldom used playlists, so I didn’t resort to any backups, in an effort to keep this installation as clean as possible.

This recursive listing of the Internal Storage folder has happened to me twice over the past couple of years. It’s very rare, and thus probably very difficult to track down the cause.

Thanks for the input @Geoff_Coupe. Now I know I wasn’t just seeing things

When I attempted to use Roon this AM, response time was terrible. I immediately checked for the recursive “InternalStorage” folder issue, but that was fine. I noticed multiple copies of some albums and decided this was a hold-over from the corruption issue, so installed from scratch. I’m finally back to the point where I’m attempting to connect to the newly installed/updated core but getting an authorization error (below). I know the creds are OK because I keep everything in LastPass and I’m just copy/pasting. I’m really stuck now. I wonder if my Roon account is locked or something like that. 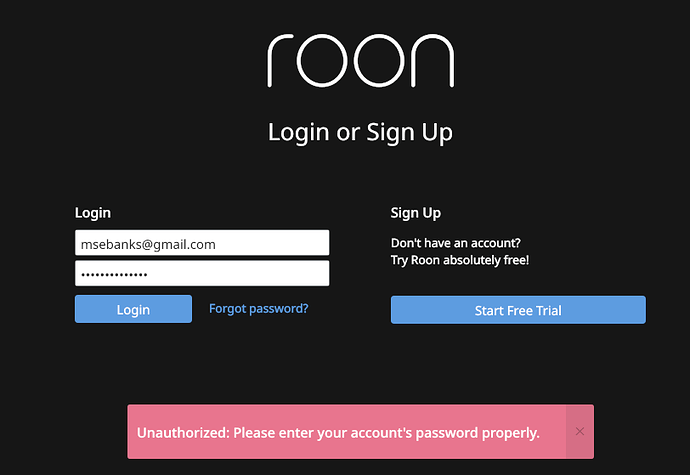 You’re not pasting a trailing space on your password are you? That’s tripped me up before on web sites…

Unfortunately that was not the case. I’ve been down that road before as well:grinning: I was able to use the password recovery route to progress. Everything is settled now. It wasn’t until I tried browsing my library that I realized how much effort I’d put into curating it. I’m going to try restoring the database from a backup. Everything seems to have settled down now from a performance perspective though. The NUC ROCK is running nice and cool.

Thanks for the update here, glad to hear that the library is settling down and now works as expected. If you have any further issues do feel free to reach out to us again!