Unable to delete tracks or album

There is an album showing in ROON that is not in my library. Some of the tracks show as “Unavailable”. I am unable to delete this album or those tracks. How to I get rid of this album? 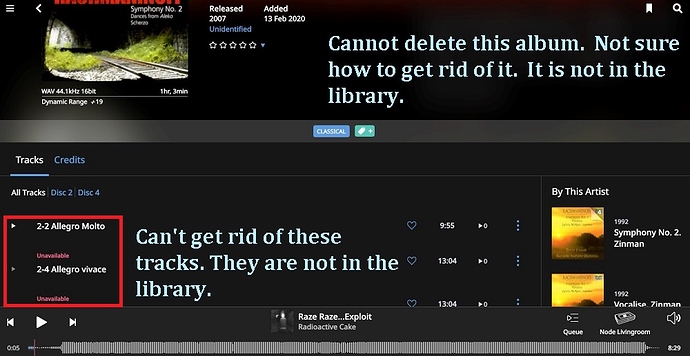 Looks like you cut some of the display off, on the top right click the dots and edit album, try the Rescan album? Also when you delete the album, what exactly is the message it gives you?

I think I had something like that once. I added the album again and was then able to delete it.

GeoB:
It gives me no message. It simply changes the color of the Permanently Delete button. That color change obviously indicates non functionality so it does nothing, no message. 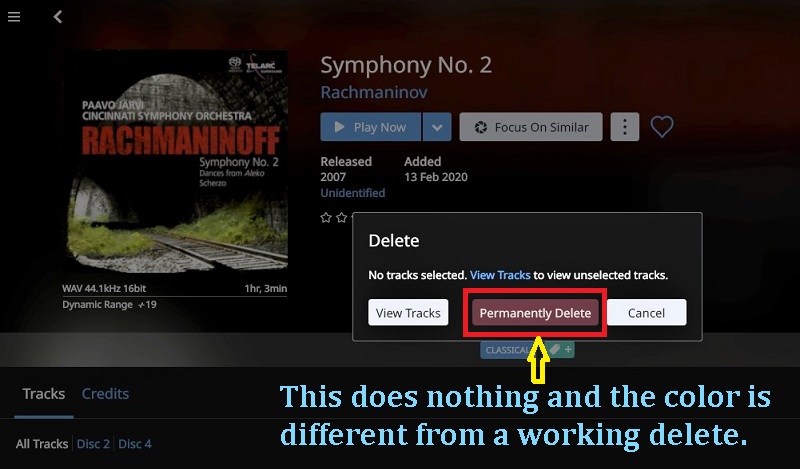 Try rebooting your Roon Core and see if that removes the album. 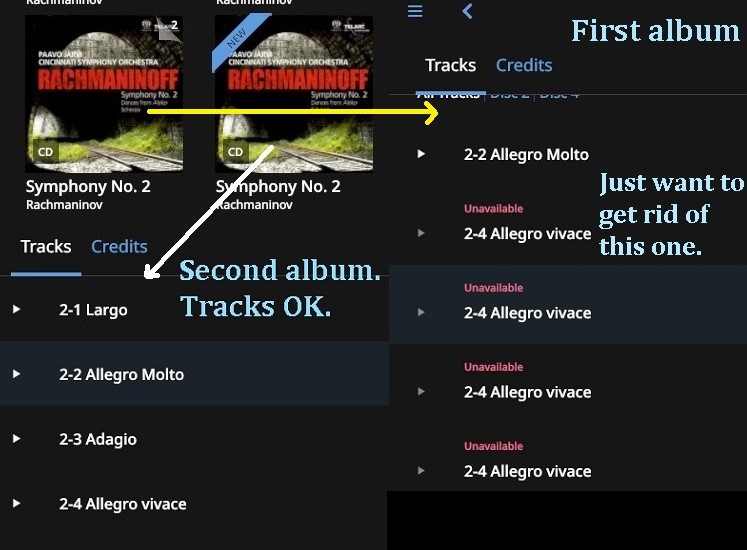 Is there a function to combine them? I don’t remember.

Jim_F:
Yes there is. When I do that I end up with two track 2s in the good album and still have two albums; one with the “Unavailable” tracks in it. It’s not a huge problem having that unusable album. It just screws up the album count I keep track of in an Excel document.

I just wish I could rescan the artist so ROON would look at all the albums for that artist and read just my M3U tags. It would be sort of like the Rebuild Index in Bluesound. That always straightens out weirdness in the metadata. ( flush and redo ).

It says to View tracks, what does that show?

Also are you deleting individual tracks, if so go to the 3 dots, hit edit album, scroll down and delete album.

geoB:
When I try to delete individual tracks, the “Permanently Delete” button has that "I ain’t gonna’ work color. So it does nothing. When I look at “View File Info” for a track in the bad album it says “Track not in your library”. Well… if that’s the case why is ROON showing it??

What ROON has done with the server is amazing and I really like the ROON Community interaction. This interaction, I’m sure, solves a lot of issues that come from the complex nature of the program. The occasional glitch is understandable due to the extensive set of features.
I’m hoping this one can be solved, but it’s not a deal killer. I just wish there was a way to tell ROON to only look at M3U tags in the files. Not everyone puts as much attention into tagging as I do and maybe not as many people have a library so full of modern classical as I do. For jazz, Rock, Pop etc. ROON works really well. The tags for Classical are a mess from rips and downloads which is why I have paid so much attention to tagging. All this tagging work has made every other server I use behave in a way that allows finding Artists and Albums easier.
The fact that I use composer last names for Artist and Album Artist causes ROON some issues ( Not the above issue ). So many of the metadata issues I have with ROON are my fault.

Ok i think the problem is your trying to delete tracks, delete the album not the tracks,

geoB:
The first thing I tried, before attempting to delete tracks, was to delete the album. That failed. The same “Permanently Delete” button color that indicates the inability to delete something is also noted for the album delete ( It’s as if it were “greyed out” ).

ROON should be able to look at the library and see there is no such album and then eliminate it. You can see the screenshots showing the “View File Info” for the tracks in the “bad album”. They are both missing the Path indicating ROON knows they do not exist. 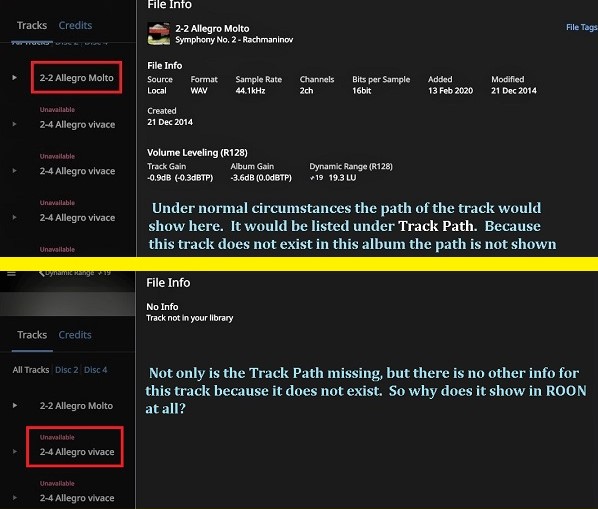 Early in this thread, I suggested rebooting your Roon Core. Have you tried that yet? That has helped users in the past.

Sorry that did not work, can you give more details please, start over at the beginning, how did the album or albums get into Roon, then what did you do to try and fix it, post more Pics without over typing data on the images. Something is definitely odd here, click on the 3 dots to the right of a good track and a bad track and show the file detals from View File Info, should look like this: 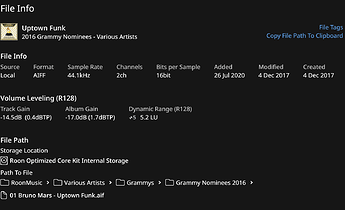 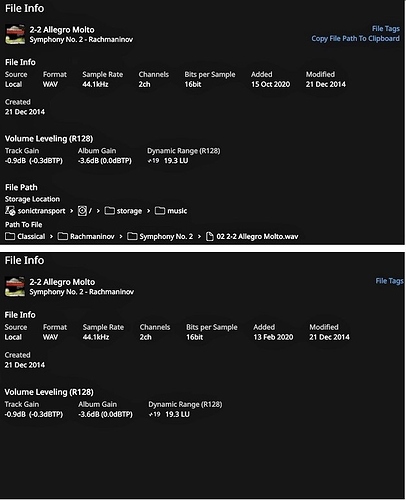 Greg and all you guys I bothered so much:
Did a Clear Cache in the core then Stopped and Restarted ROON. That bad album is gone!!

Sometime it’s the simplest things. I tried to complicate the issue.

Thanks all for your help. Rich