Update:now the Sonos is no longer showing in devices. See second image. 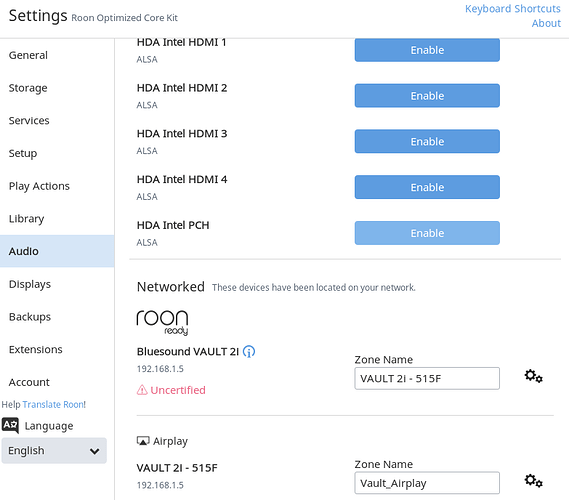 Can you please try rebooting your Core and Networking gear as the first troubleshooting step here? Also are you up to date on Sonos firmware?

Hi Noris,
Already did all of the above prior to posting. Thanks!

Thanks for letting me know that the reboot hasn’t helped. Can you confirm that the SONOS is still showing up in your router? Are you able to select the SONOS airplay zone from an iOS device and play back to it (not using Roon)?

I’m wondering if this could be some kind of multicast issue on your router preventing Roon from discovering the SONOS airplay zone. Might be worth a check in that direction and taking a look over our Networking Best Practices Guide to see if your router falls under one that needs special settings applied.

The router is a Netgear but not one of the ones listed on the guide. As you can see from the attached screenshot the Sonos is showing and yes I can play it via Airplay from both the Apple Music and Tunein iOS apps. The other screenshot show the Sonos (Kitchen) and Vault connected as Airplay devices, but when selected, only the vault plays.
As I said, it worked fine before swapping from having the core on a dedicated computer over to ROCK on the NUC. It is perplexing to say the least. 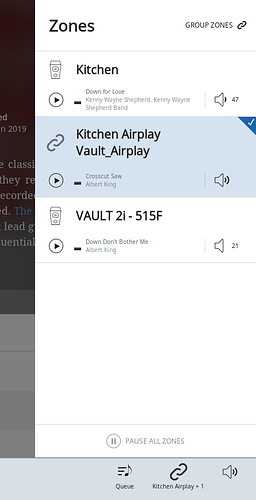 Sorry for the delay in getting back to you here, I wanted to take another look at this case. You mentioned this in your first post:

I can play the Sonos directly from Roon

Does this mean that you were able to play to the SONOS Airplay zone from Roon as expected or were you able to output to it as a SONOS zone (non-airplay)? If the SONOS zone is ungrouped from the Vault, it works as expected without any issues at all?

It’s a bit unclear and I would like to confirm this info so that we can proceed.

I can output to it as a Sonos Zone. Grouped with Vault as airplay it will only play through the Vault and not the Sonos. I can play to both via airplay with most any other iOS app such as Tunein, Spotify, or Apple Music.

Thanks for elaborating further on this issue. I spoke to the team regarding your case and they have noted that we have made some changes in this area which should help with Airplay grouping, these changes are scheduled to be published in an upcoming release.

While I can’t comment on an exact timeline of when it will be released, I would definitely suggest keeping an eye on our Release Notes Section for when the update is published and we can re-visit this issue again afterwards.

Hi Noris,
I am happy to report that today’s update has fixed the problem. Thanks for staying on top of it.