I am unable to “Like” (heart) items that are not added to my library.

For the time being, I am a streaming-only user, so I may be misunderstanding the use case if this feature is primarily intended for locally stored libraries. However as a streaming user, this behavior is a bit odd and confusing to me. I’m unable to mark songs I like as favorites this way unless that entire album is added to my library. After adding it, it can then be liked, but only while viewing it from the library.

Additionally, there doesn’t appear to be any way to like the currently playing track.

These points make it extremely clunky for streaming users, and especially so on mobile. Can you please look into improving and expanding on this functionality?

That’s how it works, historical due to the sooloos roots of roon which predated streaming. You can add an individual track and heart that it doesn’t have to be an album.
You can also tag tracks to keep track of them.

You have to first add/heart the complete album before you can heart any individual tracks from said album.
Thats just the way it is right now.

I am aware of that, I basically said that is how it works. I am essentially asking if that functionality can be revised to match the expected behavior of individual streaming services. Even the services that Roon can integrate with work this way on their own. Both Tidal and Qobuz have heart buttons available on each track, and on the playback screen. It would make more sense if Roon worked this way as well.

I don’t see why it has to work the current way it does. It just adds a bunch of stuff to my library when I really just want to add a song. What’s the benefit of this?

Add your vote then?

I am aware of that but you DID post it in support, and it is not a support issue at this time.

As @BlackJack has already added the relevant feature request for perusal I will say no more.

Definitely should be able to “like” single tracks as opposed to taking on an entire album in order to only like one song. There is zero rationale to that method.

If the functionality is broken, even “working” as intended, then it should be a support issue and not a feature request.

You are more than free to enjoy your own interpretation of it of course!
However as it is working as intended by Roon then it is not truly a support issue as such right now.
There are numerous things that both yourself and myself would prefer were different in Roon I am sure, but again it does not make them support items.
Hope you understand.

And this kind of treatment is why Roon hasn’t exactly taken off. The expected functionality is terrible and so is the support.

100%. Even if it wasn’t a support issue, and was a feature request, a mod should then be able to, and willing to, move it to the correct location. Either way, a heart on each song when said streaming services already have this shouldn’t be a hard ask.

Agreed. Needs to be fixed.

I’ve added a bunch of garbage just to like one song. To be more unique to each user, this should 100% be fixed. We don’t want to add a album just to have one song. It makes things messy the way it is. Broken. 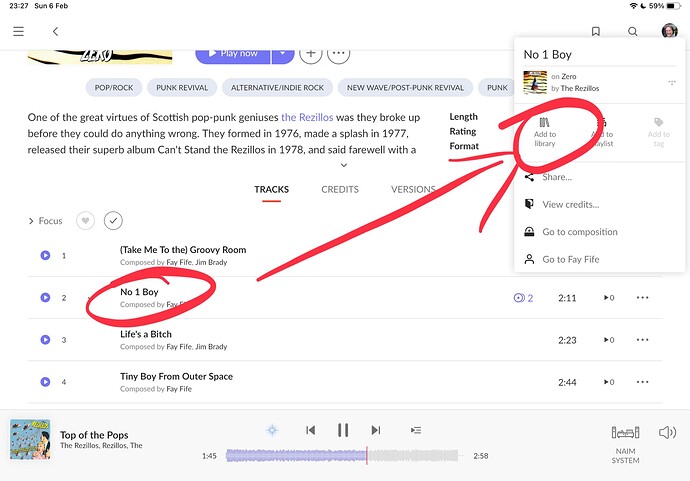 That is true John.

But different to the original complaint of being able to “like” the one track on its lonesome ownsome without being in your library.

Yes but the complaint also seemed to be having to add loads of songs just to like one.

….added a bunch of garbage just to like one song.

Just in case people don’t know a single song can be added and then liked.

Now I see what you mean.

Yes I’m sure that is partly the case here.

So just to try and clarify.

Right now you cannot " like" a track or album until you have added it to your Roon library.

However if you truly only want one or two tracks say from an album you can simply add those tracks on their own rather than the entire album as per @Sloop_John_B
post with screenshot.
And then once added to your library you can " like" them.