I can play files on my inferior iFi converter but there is a significant delay when switching between sample rates. My dac is experiencing the same thing that was mentioned by Stephano:

I hope you can help me.
Thanks,
Paul Kovit

@support
I also should mention that everything was working perfectly before the 247 upgrade.

Using a SPDIF converter to Naim DAC (not the v1)

I’m not sure if this is the same problem but I’ve been having playback issues since upgrading to build 247.

I was using an Audiophilio converter and noticed that I could only play red book files successfully. When trying to play any high res file roon would not play and not even show a waveform of the file.

I turned off “exclusive mode” and all files could be played though the bit-perfect indicator went off.

Hi @Paul_Kovit ---- Thank you for following up and letting us know that you are still having this issue with the Audiophillo SPIDF converter. In light of this, I have taken your most recent posts (along your setup description) and have moved them to a new topic so we can address this behavior directly with you.

Moving forward, may I kindly ask you to please provide me with the following:

@support
Thanks Eric. Unfortunately I’m away from home for about a week so I won’t be able to get you the information until then.
Paul

Hi @Paul_Kovit ---- Thank you for touching base and no worries. I will be on the look out for your follow up!

Here’s the info you requested:

I think my macbook has spdif out of the headphone jack but I don’t have the necessary cable to connect directly to my DAC. But as I’ve mentioned before I have been able to get hi res to play via an iFi Micro SPDIF converter. The only problem with that playback is that it takes a while to change sample rates (see the previous thread for my posts regarding that behavior).

The playback settings for the Converter + Naim DAC zone.The signal path leaving Roon when you make this observation. 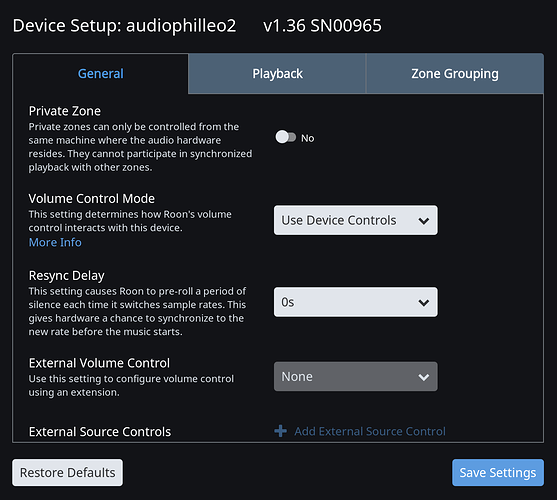 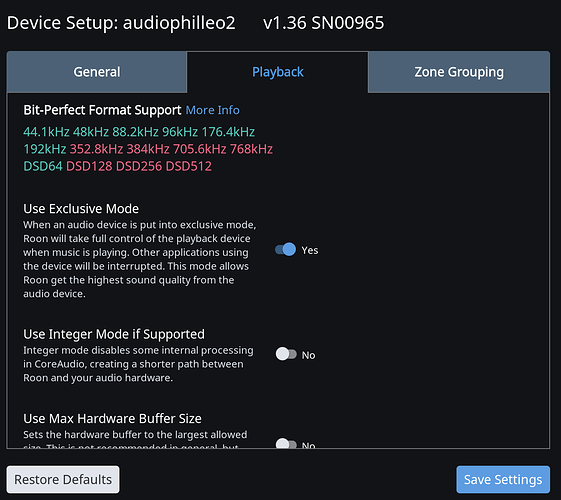 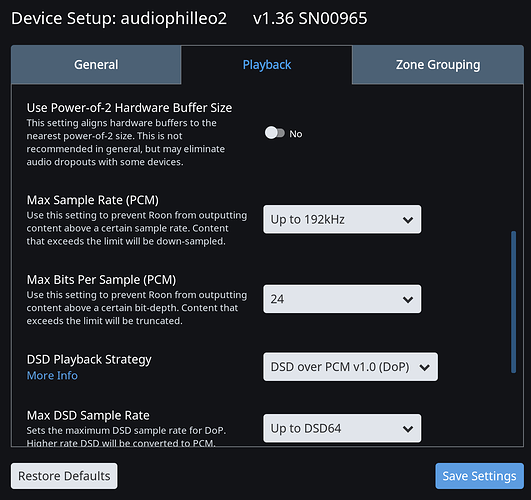 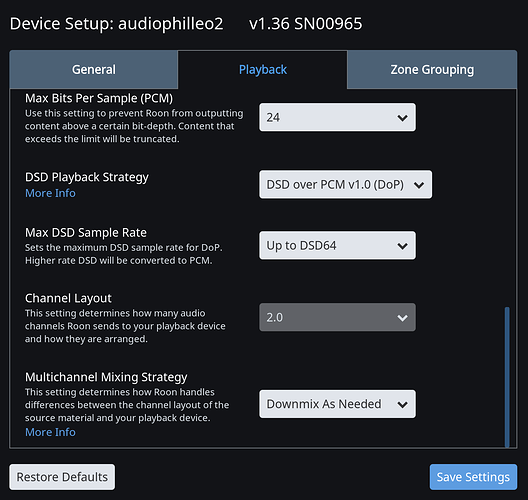 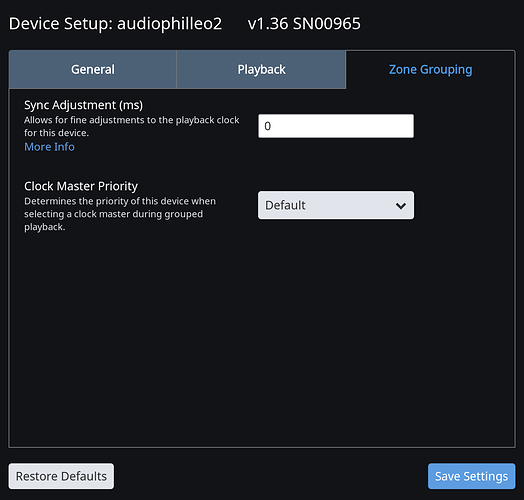 The signal path leaving Roon when you make this observation.

I can’t show you this because a can’t get a hi res file to play. When I press the “play album” button the waveforms for all the cuts of the album quickly appear for about .25 seconds and disappear. I have a 13mb video that can demonstrate this.

Please let me know if you need any other info from me. FYI, I installed the new build last night but that did not solve the problem.
Thanks,
Paul Kovit

Moving forward, I would like to grab some logs from you to see if we can identify what the problem is here. May I very kindly ask you to please reproduce the reported issue, note the time when it occurs (very importanrt), and then use the instructions found here to send us both “Roon” and “RAATSever” logs from the device hosting your core.

Hi,
I have a dropbox account. What email address of yours do I use to create the shared link?

What email address of yours do I use to create the dropbox link?

Hi @Paul_Kovit ---- You should be able to just provide with a “download link”. A quick Google search came up with the following: Dropbox - “Create a shared link”.

Hi Eric,
Here are the logs you asked for. I attempted to play a hi res album at 12:28pm EDT.

Here is video I took two days ago of how it looks when I attempt to play a non-redbook album:

Thanks, @Paul_Kovit! Confirming that the materials have been received and are in our queue to be evaluated by a member of our tech staff.

Once my report has been updated and passed back, I will be sure to share the team’s thoughts/findings with you in a timely manor. Your patience is very appreciated!

Hi @Paul_Kovit ----- Thank you for your patience while the team has been conducting their analysis of the logs you’ve provided to us.

Thanks Eric,
I should be able to try this out tomorrow. I’ll let you know how it goes and supply screenshots as well.

Please remember that the audiophilleo and Roon were working great together until the the 248 build update.

Hi Eric,
I turned on integer mode in the audilophilleo device set up, saved the settings, quit Roon, relaunched Roon and tried playing a hi res album. There was no change in behavior. I’m including screenshots of the audio plugins in my root library and user library. Let me know if you have any other ideas.
Thanks,
Paul 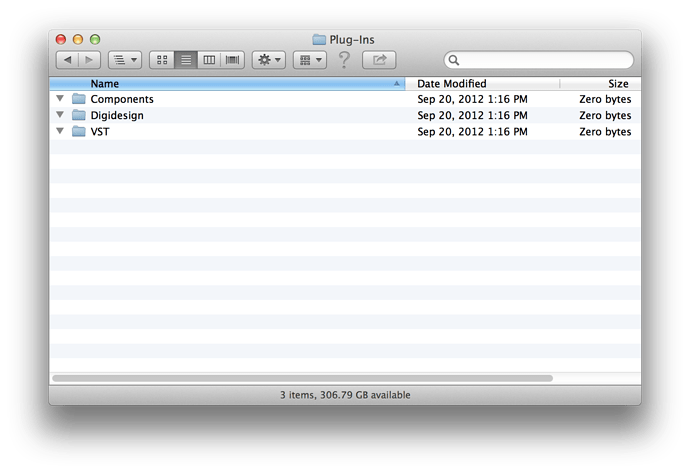 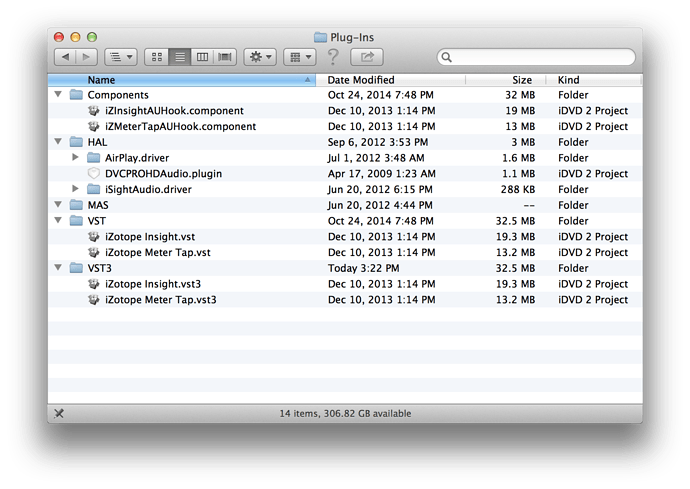 Hi @Paul_Kovit ---- Thank you for the follow up and more importantly, thank you for your patience. Apologies for the slow response.

Moving forward, I brought your logs to one of our developers yesterday during a team meeting and he commented on the mentioned traces above that the device appears to be rejecting our attempts switch from 96/24 content. Which in turn causes Roon to get into a sort of, “retry loop”.

In light of the above we are going to try to get an Audiophilleo 2 in house to test with in our QA lab, to try and determine what is causing this behavior to occur. Once I have some more feedback about this issue I will be sure to update you/thread in a timely manor.

Hi @Paul_Kovit ---- Thank you agin for your patience while we’ve been looking into this behavior for you.

Moving forward, we are still waiting on some gear, but our techs have some theories as to what could be causing this behavior. May I very kindly ask you to please give the following a shot and let us know what observations are made? See below. Thanks!

@Eric
@support
@David_Orgel
Hi Eric, I’ve tried the things you mentioned and had no change in behavior. I set the volume leveling to “auto” and changed the headroom management (see in the screenshot that a letter E showed up when typing all the zeros). It looks to me that the para EQ gain settings were already set to 0. 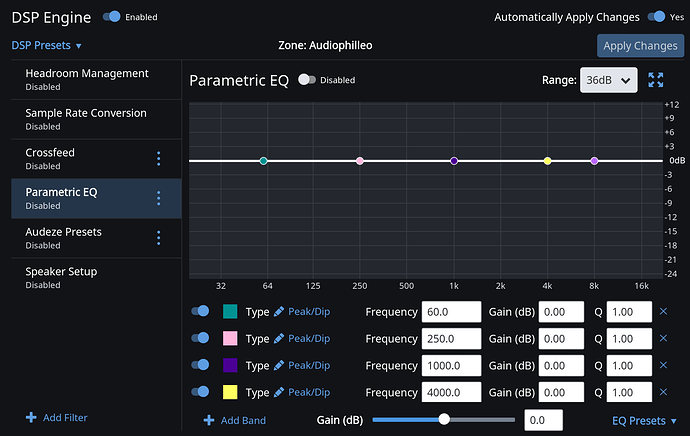 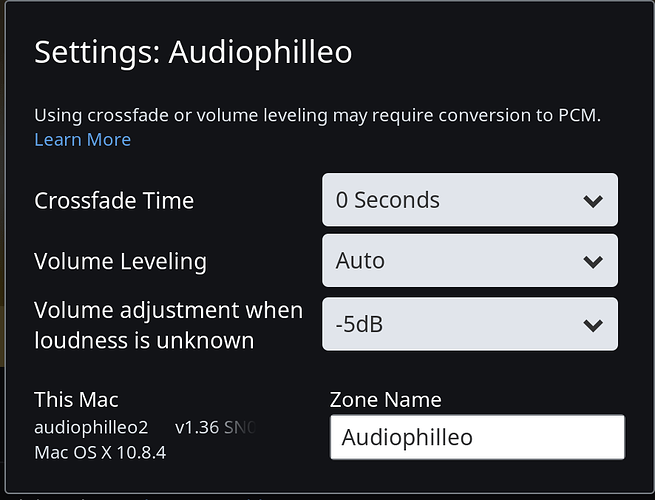 Would you want me to send you my Audiophilleo (plus Pure Power)? It actually belongs and is registered to fellow Roon-ite David Orgel who has given me permission to ship it to you if that would be helpful.

I think you need to turn Parametric EQ and Headroom Mgt on for @Eric’s tests to be successful – they’re both set to ‘disabled’ in your screenshots.