Unable To Search Or View Some MQA Tidal Albums

The new Dido album came out recently. I went into Roon and searched for Dido and the albums that came up did not show the Tidal or Qobuz Full Album. Surprised, I went into the Tidal desktop program and searched for Dido, sure enough there was the Master/MQA version. So I added it to a playlist hoping it would show up on Roon. After a few minutes it showed up, but it’s an empty playlist. On the Tidall program it’s not empty. I also went into Tidal on Roon and looked at recent masters and it’s not on the list. I also noticed a few other albums don’t show up in Roon when I select Masters.

So what’s the issue? Can’t Roon display the data that Tidal is presenting as recent Masters, and why can’t it display this particular master? There seems to be a data presentation bug in your API access to Tidal.

Shows on the front page of my Tidal in roon. Favourited it and playing it now. 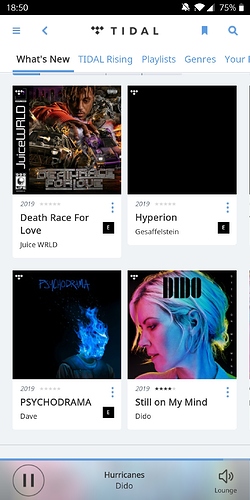 You are not showing or playing back the master/MQA version. Your screenshot if of the standard version from a mobile device. It is not related at all to the issue. 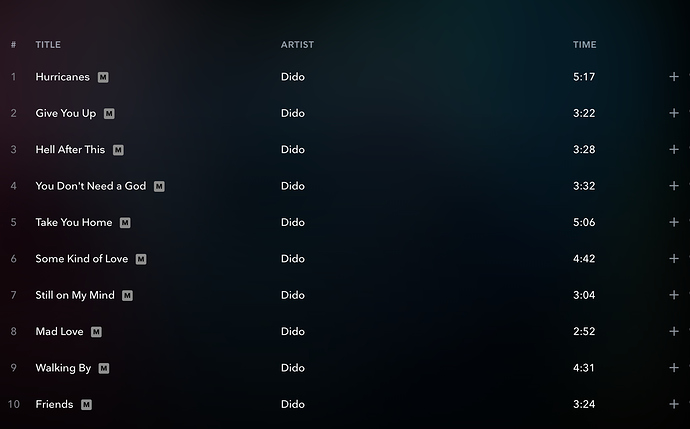 Here’s another screenshot showing it as a master in the Tidal desktop program.

Can anyone bring up the MQA version in Roon? 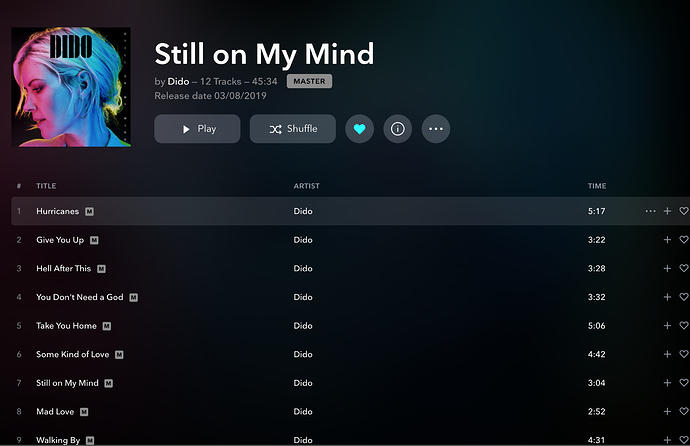 I’m in the uk and it doesn’t show up as a master only cd version.

Here in the US when I search for Dido in Roon I see 8 main albums including a CD Quality copy of Still on My Mind but when I select it I only see one track just over 3 minutes. 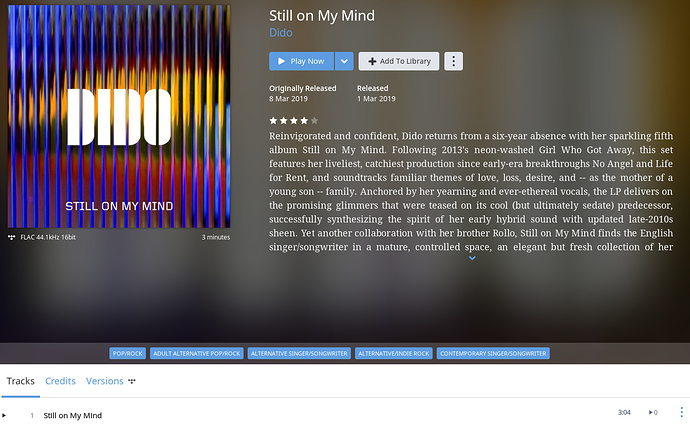 As the originally Released Date is today March 8th I’m assuming the complete Friday dump from Tidal to Roon has not completed so I expect different results tomorrow or Sunday.

“Tidal to Roon Dump” ?? Can you elaborate on that? I thought Roon is using Tidal’s API’s realtime.

I was able to find the full album through Tidal by typing “Dido Still On My Mind” in Roon’s search, but that only provided me the CD version of the full album. I did run into the issue you mention above about seeing the album with only one track when I searched for “Dido” alone and looked at all albums.

Try searching the way I did, without the quotes and see what Roon gives you out of Tidal.

While I can’t find the post where I read this it’s my understanding that the Friday process to get Tidal’s new releases ( not your favorites, all new albums ) into Roon is a two step process. Tidal makes a download available to Roon which Roon then processes to update their master database. It can take Tidal more than 24 hours to make the download available and Roon then has to download it. Once Roon has the downloaded data it takes several hours to import into their master database.

Worst case it could be well over 24 hours before the Roon database reflects Tidal’s Friday updates.

So while Dido’s new album appears in Roon now from both Tidal and Qobuz, the Tidal MQA Master only shows up using the Tidal’s Programs. I also checked the Tidal Web App and it also shows Dido’s MQA version. What I don’t get is that I do not see the regular version of the album on Tidal - I only see the MQA version when using Tidal through the Web App or Desktop App.

Can anyone else confirm they’re seeing the same thing?

Still on My Mind is CD Quality and only has 1 track. Note that I do not have any Dido albums in my library.

This is what I see on the web with Tidal:

Still on My Mind is shown as a Master with 12 tracks.

No idea why Roon does not have the MQA version of Still on My Mind or why its CD version only has 1 track.

Tim, did you try searching in Roon the following (without the quotes):

“Dido Still On My Mind”

That actually showed me multiple items on Tidal and I was able to see the full album at least in Roon.

I’m also in the US. The reason I have Qobuz is because I’m a beta tester for them.

I searched for Dido, clicked on the top result which was the artist Dido and then captured an image of the 8 main albums displayed. I just repeated the process and got a different result. I still see 8 main albums but the 1 track CD version of Still on My Mind has been replaced by the 12 track MQA version.

Not sure if Roon updated everyone in the hour since my last post or if my searching triggered an update of my local database.

I did play all 12 tracks and all showed as MQA encoded in the Signal Path.

Makes you wonder how many other titles are not showing up…

The MQA version of Dido doesn’t show up at all for me in the UK.

It is under Versions for me in the UK. Sounds great too… 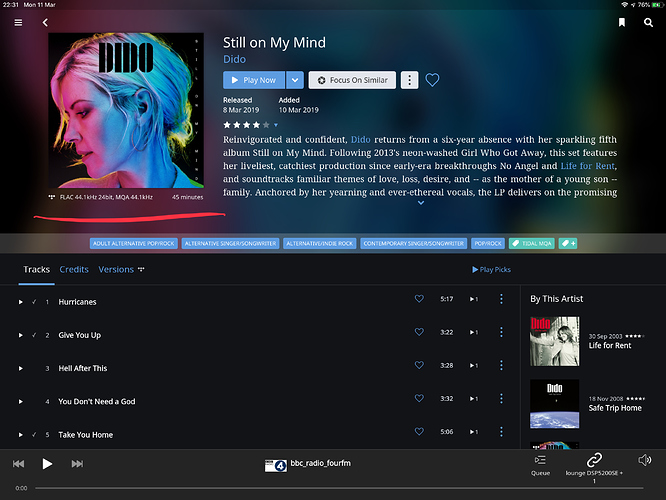 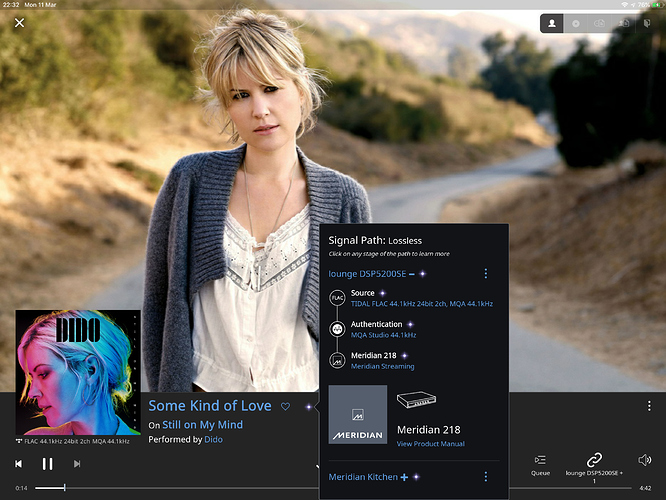 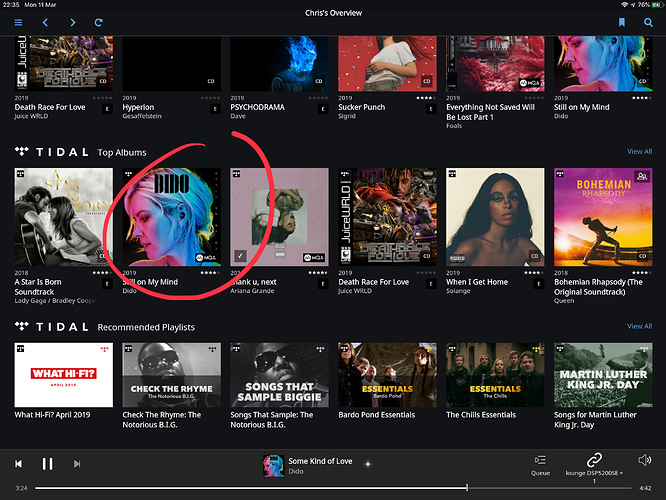