Have been using Roon over several devices since last July. Running core on a 2012 Mac Pro. Recently added a Microsoft Surface running Windows 10 Pro to ecosystem, connected to a PS Audio Sprout. After loading the Sprout USB 2.0 drivers, I can see the Sprout in Audio Setup, but after configuring the output, it doesn’t appear as a choice for an output zone. I tried the same setup with another Surface (Surface 3 Pro) and had no issued playing Roon through the Sprout as an Audio Zone. Oddly, when I configure Roon outputs on any of my other machines, I’m provided a dialogue box to name the output. That isn’t happening with the Surface Pro. I see the “gears” to click on to alter the settings, but that name dialogue box never appears.

Tried uninstalling and reinstalling the USB drivers. Thanks in advance for any suggestions.

Thanks to everyone who’s looked at this. I wanted to add that the USB port and the driver appear to be fine - they work with other programs - just not Roon.

Hey @Chris_Sauer – so the Surface is running as a remote, and you’re having trouble setting up the Sprout as a private zone? Is that right?

@mike yes, that’s correct - the core is on the MacPro and I’m trying to output from the Surface Pro as a remote to a private zone.

Hey @Chris_Sauer – this is a somewhat lame answer, but all the audio architecture you’re using with Private Zones has been deprecated ahead of our 1.2 release, which will use our new Roon Advanced Audio Transport architecture for pretty much every Roon zone.

I think there’s a reasonably good chance this will work when the new release goes live. And since we’re not going to be fixing bugs on the old stuff just as it’s being retired, I think the best bet here is to wait for 1.2 to to go live.

It shouldn’t be long now, and if this is still happening then, we will absolutely take a deeper look. Thanks for your patience!

@mike yes, one of the reasons I’m not getting too worked up about it is I expect that it might go away with 1.2. I’ll let you know one way or the other. Thanks!

Let us know how it goes.

Got 1.2 running on Core and on remotes (both Windows 10). Must be doing something wrong, for I don’t see any directly attached output zone options. When I go to Audio Settings, I only see devices attached to the Core and my networked Auralic Aires. The Audio Settings tab on the remotes looks exactly like the one on the Core. 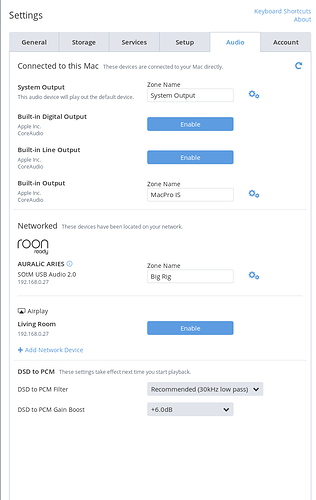 Let’s start from the obvious thing - firewall: can you try to disable firewall on one of the remote machines and restart both apps (Core and Remote).

Am I going to need to completely disable the firewall permanently to keep the device playing?

Am I going to need to completely disable the firewall permanently to keep the device playing?

No, that shouldn’t be necessary, but we do need to do a little more troubleshooting.

Why don’t you start by turning on the firewalls one by one, and seeing what causes things to break. I would start with the firewall on the Surface, and if turning that on breaks things, let me know what rules you’re seeing for Roon/RAATServer in the “Allowed Apps” section.

Thanks for your patience @Chris_Sauer!

I think we can put a fork in this. After allowing an firewall exception for anything Roon-related (there were multiple instances of Roon.exe and RAATsever.exe), both Surfaces are working with the firewalls back on.

Now, to listen to some music. Thanks for all the help.