Is there a way to identify Tidal albums with missing tracks (marked as unavailable)? 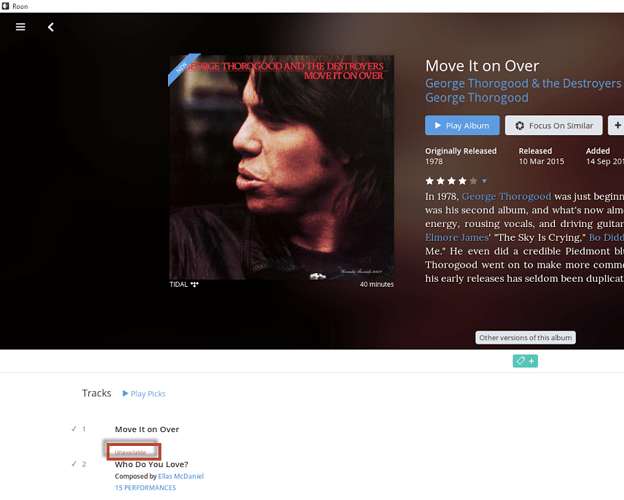 unfortunately, we dont know this information until we go query it.

i’m going to move this over to the feature requests category. the ‘automatically play your local versions’ and the reverse is on the roadmap.

Why are tracks or albums unavailable in Tidal? Is this region dependent?

Hope you don’t mind posting in your thread, but I am fairly new to Tidal.

Although a bit of an “corporate” answer from Tidal. Strange that they only have 1 track in your case that is not available, you would think they have the rights to the album in total?!

Each track is an individual musical work with a separate copyright, capable of being the subject of different copyright arrangements. The circumstances as to how that might occur are as varied as human experience.

For example, the song “Biko” is unavailable in Tidal on Peter Gabriel (1980). It seems likely that special copyright arrangements may have resulted from Gabriel’s decision to donate all the proceeds of the single versions to the Black Consciousness Movement (See this article for a fascinating history and analysis of the song). I can’t explain why that has affected the streaming of the album version. It could simply be that the rights are separately owned and Tidal hasn’t entered into an agreement with the owner.

Edit: Fixed the link; sorry about that Chief.

Hey andybob, thanks for sharing. Interesting read. I always thought that Biko was a powerfull song, but the full background was not in my music bag. Makes you listen to the song in a different way now.

I seem to have a knack for finding albums in Tidal that are not available. More oft than not albums in this state on Tidal are available for streaming on Spotify or Apple Music. Since this typically occurs when I’m in “discovery” mode, it would be nice to have a lossy streaming service with a deeper library supported as a fallback.

Hmmm, either I stay of the Single Malt from now on, but now I am even more confused.

The unavailable track from George Thorogood is available here.

Even stranger, in roon the Neil Young album, Live at the Cellardoor is showing as not available. When I use my Bluesound Node I can play that album without issues.

I do not understand why there is a difference between roon and Bluesound.

Edit: also can play the Neil Young album through the TIDAL app itself.

Strange, I can’t get an album listing in the Tidal (OSX) app for Neil Young, but I can hit the play button on his image on the artist page and it will start playing his music and lets me click on the album, see the track listing and play any of the songs on each album. I can also add the albums to a playlist and access them that way.

I’m not sure what is wrong with the OSX app, but his albums are coming up in the web app and I’m able to play them fine.

There is still a very limited number of his albums available on Apple Music and Spotify.

Did Neil have a change of heart with regards to pulling his catalog from Tidal? Or is this some sort of bug with Tidal’s DRM?

Neil said he was withdrawing from streaming back in July. The inconsistencies sound like implementation issues, but could be rights he doesn’t control.

His albums were definitely removed from Tidal in July as well as from Spotify. And I think the inconsistencies were with the Tidal OSX app. I just restarted it and everything is coming up now. I’m also seeing all his albums like they were prior to July in both the web app as well as in the Android app on my phone.

Maybe Neil and JayZ had a convo and decided to join forces?

I hope so. The quality concerns ought not to apply to Tidal. It would be great if Pono and Tidal merged.

Listening right now. Didn’t make sense to pull from Tidal if concern was sound quality. His albums are still missing from Apple Music.

Yeah was aware that the old man was having some tantrums again anouncing pulling from all streaming services. Maybe Pono was becoming a Nono quicker than he had hoped for and he wanted to channel his listeners to Pono. But still love the man!

But anyhoo, sorry for coming of dense, but how can it be that the “unavailable” tracks in roon are available in the TIDAL app itself and playing and are available through the Bluesound app and can also be played on a Bluesound Node. I can only not access these titles through roon.

All things equal, this should not be possible, so I supect something in roon or interaction between roon and TIDAL is not as it should be.

That is an interesting question Rob and @danny will want to know that it is happening (he will now see this post). It could just be a timing issue, but I don’t understand that Tidal through Roon is intended to be subject to content limitations that Tidal direct or Bluesound are not.

Just to add a data point:

Couldn’t play it in Roon, popup on play bar: “This track currently unavailable in Tidal”

Played fine through Tidal in Chrome.

Came back to Roon, after a few minutes could play it in Roon.

Well the “old man” started by poo poo’ing “streaming” and then went on to poo poo “CD Quality”… apparently ignorant to the fact that a large percentage of the content available in the Pono Store is 44.1/16 (including many of his own albums). Meanwhile you can still purchase his albums on Amazon, iTunes, etc. in lossy MP3 format.

He may not have 100% control over where and how his content is distributed, but he does have control over his mouth and the brain that should be controlling it.

With regards to Tidal… At least in OSX, the Tidal app doesn’t seem to be as responsive as the web app. I’m on a much better connection today and all the Neil Young albums are showing up right away in the OSX app.

edit - And I’m able to play the Neil Young albums through Roon via Tidal again.

Cancel that… still showing “Unavilable” in Roon, while being playable through the Tidal app.

Getting copyright correct, meaning getting Roon to interpret the copyright rules precisely the same way that the TIDAL apps do, has been a recent and on-going project. My feeling was that we were 99% there, but I see we’re doing bad with Neil Young albums currently.

Another wrinkle is that I think TIDAL is making changes to how they apply copyright rules on their side right now as well. That could explain @andybob’s not being able to play Painted From Memory in Roon but then playing it successfully a few minutes later.

Since work on this is on-going, I recommend trying “Re-Scan Album” for any TIDAL albums in your library which seem to be wrongly unavailable. That’ll pull in fresh data if it has been recently fixed.

Thanks for pointing this out – I’m looking into it now.

I have the same problem with many albums. Among them George Harrisons “Somewhere in England”. It’s available in Tidal app but UNavailable through Roon. I tried to rescan the album but no luck. Why?