My library includes 2 albums with Winona Zelenka’s Bach Cello Suites (Marquis Label 24-96). One album has Suites 1,3&5 and the other 2,4&6. After merging these two albums, I find that there are now two tracks 1-1, two tracks 1-2 etc.
Please advise how the albums can be un-merged or alternatively renumber tracks to include a Disc 2.

I have two other sets of Cello Suites and both these have tracks grouped into Works. Before the albums were merged, there was no Works grouping.

Thanks Brian,
I now have two albums but they have the same Roon album title. Roon could not re-identify the album with the incorrect title.

Tracks are shown as duplicates even though they are different lengths.
Can the title be editted? 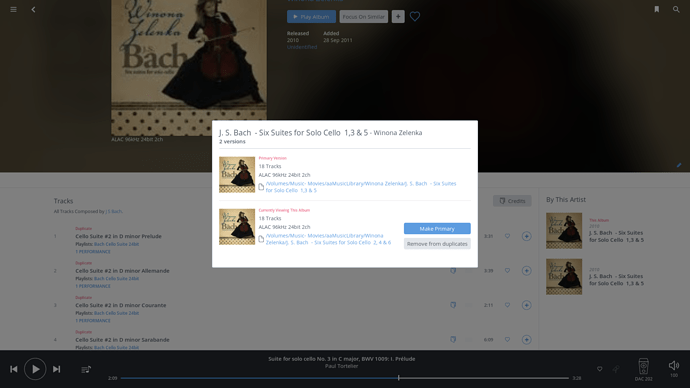 Roon does not support editing in-app at the moment.

You can certainly edit titles using your favorite tag editing software. Roon should pick up the changes and reflect them automatically.

You can also use the “Identify Album” functionality to guide Roon through the process of identifying the album, assuming that it exists in our databases.