I’ve been running Roon for several months with no issues at all. All of the sudden last week my NAS disconnected from my “Storage” page in settings. It wouldn’t reconnect, so I deleted the share from my settings and attempted to reconnect it.

I’ve tried \IPADDRESS\music - which was how it was set up before, and worked just fine and I’m getting a “There was and unexpected error: UnexpectedError” message.

I looked through all of the NAS help on here, tried using SMB also AFP. Changed the settings in SMB in Diskstation to match the recommended settings I’ve seen posted here.

Verified the folder is shared, and tried those methods and naming/path of the shared folder. Made sure Roon has full disk access. … nothing is working… and I’m stuck.

I can see the NAS from my computer, my laptop, using DS File on my iPhone and iPad. Also, no issues at all connecting to the drive from Sonos.

Hum… I run my Core on Linux, not macOS, but I’ve noticed that SMB support on macOS is quite temperamental, and has changed subtly between macOS versions (I’m on the latest Catalina now). Anyway, here’s a debugging suggestion: rather than asking Roon to mount the NAS share as you are doing, mount it on the Mac Mini directly using Go>Connect to Server… on the Finder, and then use the macOS local folder name for the share in Roon. If that works, the problem might be that Roon’s negotiation of the SMB mount via macOS 11 is buggy – macOS 11 is after all still in beta

I end up with the same server path connecting to the sever via finder. When I connect to my NAS via my Mac mini and pull up “Get Info” on the master folder or any of the subfolders it’s just the network path… so I’m in the same place. 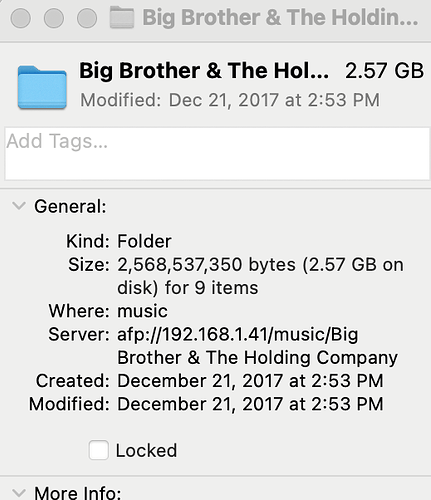 I also went into Settings -> Sharing, and tried both the local network address and the IP address listed on that window. The IP address gives me a “Invalid Network Path”… so that’s surely not going to work.

Perhaps it’s a OS X 11 compatibility issue. Oddly enough it worked on all the previous builds of OS X 11, and started acting up between builds not at at any specific update. Hopefully someone is working on a update as the final build should be released in the next 30 days or so.

When I connect to my NAS via my Mac mini and pull up “Get Info” on the master folder or any of the subfolders it’s just the network path… so I’m in the same place.

Yes, but there’s also a local path. For instance, my NAS music folder is mounted on this Catalina Macbook Pro as smb://fosthall.local/music (fosthall.local is the mDNS name for the NAS) but it also appears in the Macbook’s local file system as /Volumes/music. If I were running a Roon Core on this machine, I could set the storage folder in Settings>Storage to that.

Yep. Tried that. there’s a link in the “shared” section of system preferences. It must be a OS X 11 issue with Roon.