Unimpressed with Focus on Composers

Description Of Issue
I tried a Focus on “Chopin” yesterday BUT I guess less than 20% of the music was actually CHOPIN. For a bit it found piano but then went all over the Classical shop but at least it did not play any jazz or pop.

I’m into year 3 of ROON and am generally VERY happy with it and recommend it to others but there is obviously still room for improvement.

John, where did you apply the Focus? In the Album Browser?

I tried it on my collection, and got 36 hits out of my 2274 albums. All of which had at least one track composed by Chopin - even on a Pink Martini album (mostly Jazz-oriented).

Although I have to say that the “Letters from Composers: Chopin” track on the “Songs from Our Ancestors” album is composed by Dominick Argento, and lists Chopin as “Lyricist”: 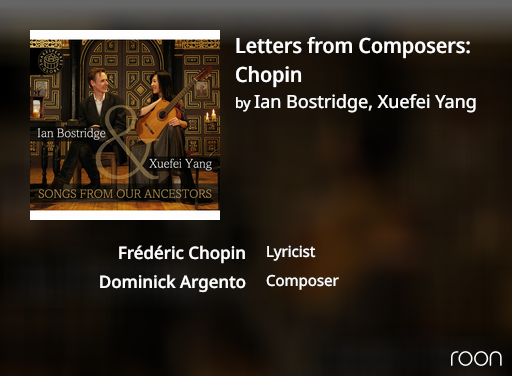 Is there more than one wayt to do it?

Is it the Random play that stuffs it up?

All albums which contain at least one track of Chopin’s music are selected and displayed BUT it does not follow only Chopin compositions are played. It appears the selection for Chopin stops after all albums with any Chopin music on board have been displayed and any track from albums will be played.

Is there more than one wayt to do it?

You could do it by Tracks. From the Overview screen click on the number of tracks in your library, it will bring a list of tracks. You can add a column for Composer if you don’t have it already. Then click the Filter icon in the Composer column and type in Chopin. Hit ‘Shuffle’.
I don’t know if it is better or not. But it is a different way to do it on a track basis.

Is it the Random play that stuffs it up?

Not the Random play - but the fact that you’ve done it from a Focus in the Album browser - so your starting point will be all albums that contain at least one track composed by Chopin. There’s nothing to stop Roon from playing other tracks in these albums…

Much better to do the Filter on Chopin in the Tracks Browser as Scott suggests. That way Roon will only play tracks by Chopin…

If you’re wanting to play just a mixed assortment of Chopin compositions there are a couple ways to do this.

The first option is to head over to the Chopin composer page and press Play Now. If you want to be more specific about the types of Chopin content you’re playing, I’d recomend heading over to the Track or Compositions browser and filter the Composer column with “Chopin”.

Let us know if either of those helps!

Thanks everyone, that makes sense and works.

I’ve always approached from the “Albums” perspective in the past and see why “Tracks” is the right approach.

All of which underlines how powerful ROON is but does also demonstrate that its complexity can take some time to become familiar with.

I’m glad @Dylan brought up the ‘Composer - Play Now’ approach. This is one of my favorite new features since launch of 1.7 (actually, Artist-Play Now in my case). The good thing about Play Now is it will draw from a streaming service as well as your library. So you get more breadth to the selections. Some picks (for me) are real revelations. The downside is you are getting music outside of your library, so you have less control.
I’m not sure about this, but it also seems the selections of "Play Now’ are not merely a shuffle. There is some logic based on the Roon User Base (aka, the herd, or ‘lowest common denominator’). It works for me, but some resent the ‘dumbing down’ they view this entails.
Very worth your while.