is it possible to send you the list of unrecognized albums which may help update your db?? @support

Albums unrecognized in your database are not necessarily unrecognized by Roon. For example: I digitized my cd version of Gershwin’s opera Porgy and Bess this afternoon. Conductor: Simon Rattle. Roon automatically identified the album as being performed by Linda Thompson (a folk singer, not an opera conductor). Made a joke about it here. One quick identification action and there was a second, correct album in Roon’s database. 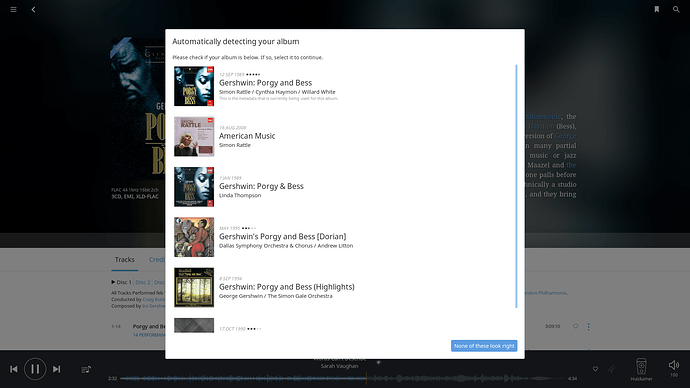 You should write here about any problems you might have with identification.

Those are albums I have tried over and over to identifiy and could not find a match.

I have around 1050 albums. At initial setup about 80 were unidentified, however after a few hours of effort I hve about 35 albums that are unidentified

Are these relatively rare / unknown albums? If not, it would help if you could include their allmusic.com placeholders. This will speed up the process to update the metadata in the databases of Roon’s partners. I have around 14k albums, of which around 10 % (mainly classical) still is unidentified. Hopefully, Roon 1.3 will improve upon this

Are you sure you’re looking well enough? Admittedly, sometimes it can be a challenge to find albums in Roon, but I have a few of the ones you mention and sometimes you have to be a bit creative in your search. As I said earlier, I hope (and expect) this will be improved upon in Roon 1.3 – especially with classical music! 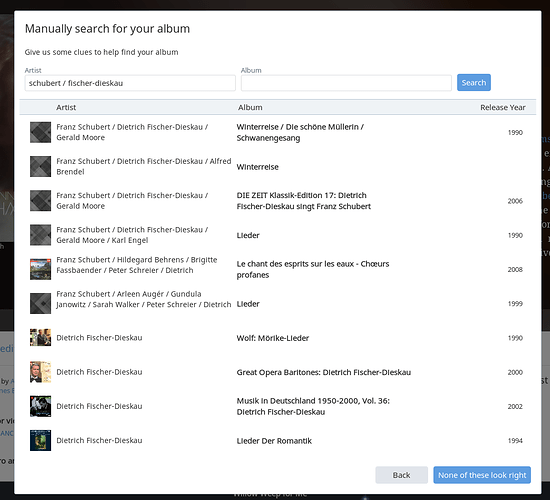 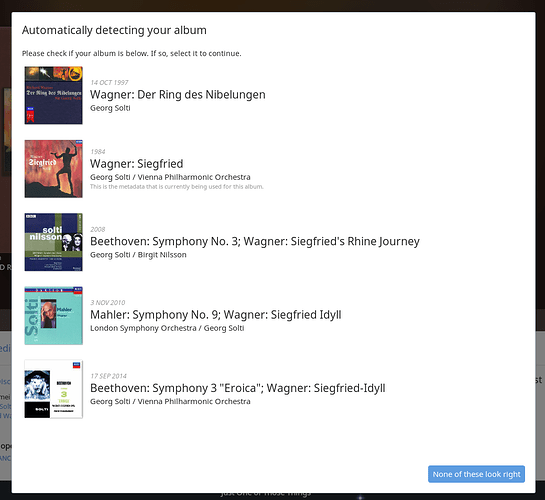 no no ididnt get it wrong its ok

Are you checking all the versions of the album when you identify?

Roon can display a number of different versions. You can see them under the album artwork. 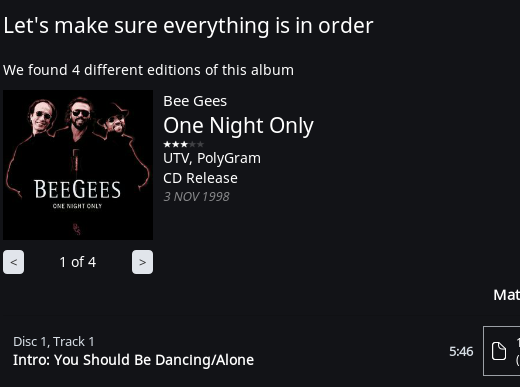 What @Greg said. For instance, The Beatles “1” has 3 versions in the Roon database, and the 2nd of these 3 versions has 11 different editions, the 4th of which is called “1+”. Could this be the edition you have?

In my version total track count is 31 and Track 1 is Intro you should be dancing and track 2 is alone
However on roon versions those 2 tracks are presented as 1 single track maybe as a medley. The video version matches those 2 tracks however number of tracks is 34 on the video release

Use the video version, since you seem to have a DVD rip and use the 32 song version. Make sure the songs match.

This will give you Roon metadata.