I’ve run into a very strange problem with my Schiit Yggdrasil (Yggy) connected via USB to a Raspberry Pi 3 (RPi3) running Roon Bridge. 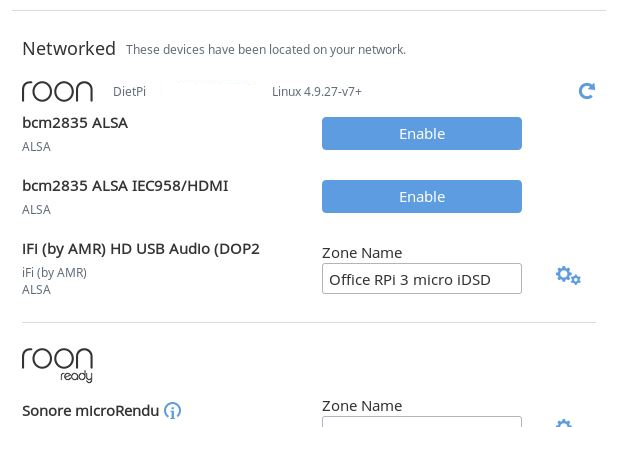 I also have an iFi micro iDSD connected to the RPi3 which is working properly (also shown in the screenshot). I’m able to disconnect/reconnect the iDSD without any issues.

Any suggestions on how I might address this issue?

Seems to me the USB interface on the Yggy drains USB power? Have you tried setting USB Power to Max on yer Pi?
What distro are you running?

Edit:
Reinstalling Roon on your control point could hardly affect the endpoints USB connection it seems? Could you elaborate?

@Mikael_Ollars, Thanks for the suggestions. This is what I can tell you so far… 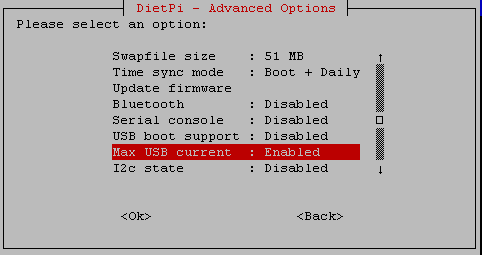 I just re-installed Roon again on my PC , but unfortunately this time the problem was not corrected. 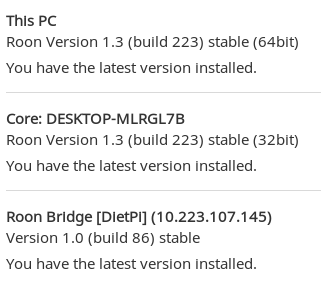 I have a bit more information. I was able to capture a screenshot while the Roon Network section flashed and it appears that Roon was attempting to enable the Schiit DAC and it also appears to be enabling two USB ports (Audio and Audio #1) even though only one port was physically connected. 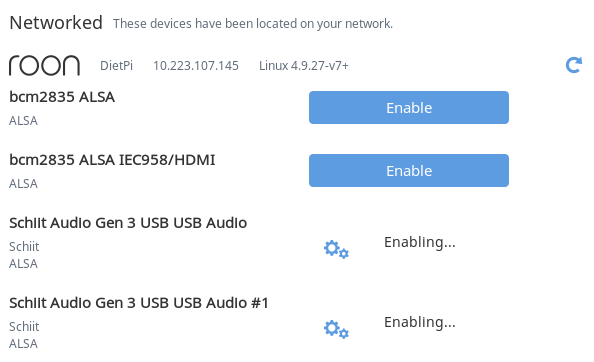 The highlighted device below is the Schiit DAC connected to the RPi3:

You dont have anything else connected to the USB ports? Just one (good) cable between the Pi and the Yggy?

I have some further suggestions to, like disabling the internal soundcards on the Pi. I’ll have to look the procedure upp though!

Disconnect everything on the Pi except power and network
Do dietpi-update first (v151 as we speak)
After reboot, do dietpi-config, Select “2 Audio Options” and select soundcard = None (Disables internal/HDMI audio)
Exit and Reboot
Display your soundcards using:

Your response should be:

Now, back into dietpi-config, select “Audio Options” and select USB Audio from the bottom of the list.
After exit and reboot, your ALSA list of soundcards should still be empty (aplay -l)
At this time Roon should not display your Pi as an endpoint. (A soundcard/output is necessary)

Now, connect your Yggy with a simple, good USB cable and allow a few seconds.
List your soundcards again, this time it should display something?
For me it looks like this:

Let’s see where this takes us!

Edit: This is what it looks like in Roon after clearing all other soundcards:

I disabled the internal soundcard and HDMI audio. Then attached the Yggy via USB and received the following results:

However, Roon is still flashing Enabling status every 9 seconds or so.

Once I disconnect the Yggy, the DietPi goes away as expected.

Larry, this seems most peculiar? Can you attach the Yggy to a PC or preferably a Mac and make sure it connects properly? (The Mac is also a driverless USB host, like the Pi)
I’m beginning to think something is weird with the Yggys USB…

Yes, very strange indeed. The Yggy has been and continues to work fine on Windows, and has done so for well over two years. I just tried the Yggy via USB from a MacBook Pro and it worked as well, but when I then connected the Yggy to the RPi, I saw the same DietPi config flashing in the Network section of Roon on the MPB.

This suggests there’s an issue with the RPi, which was working previously. But I’m at a lost to explain what is causing the current failure to connect.

Just please detail the power supply you are using with the RPi as I’m wondering if its around <=1A if you having a power supply issue.

One other note… not sure if this is important, but the lights on the Yggy indicate it’s trying to sync to the RPi at 192kHz.

This suggests there’s an issue with the RPi, which was working previously. But I’m at a lost to explain what is causing the current failure to connect.

You may well be correct, but i agree with @wizardofoz that the power supply may be delivering nasties or not enough voltage. I was also considering whether some incompatible settings from a previous USB DAC on the Pi could be still present in Roon Settings. I dont know how to clear those, though…
A different Pi and/or power supply would answer these questions i believe.

I may have missed this, but can you attach the Yggy to another Roon Bridge in your setup, and access it normally?

I would steer clear of any USB charging devices as they typically have current limiting built in… get a proper 2.5A RPi power supply and ifs thats not working then look at a different pi perhaps

Just ordered an official PS and a spare PI to test. Both should arrive tomorrow.

As a last resort I decided to re-image my RPi which corrected the issue. The RPi network connection is stable now, but Roon now shows two Yggy USB connections even though there is only one Yggy physically connected via USB. This is odd, but not a show stopper. 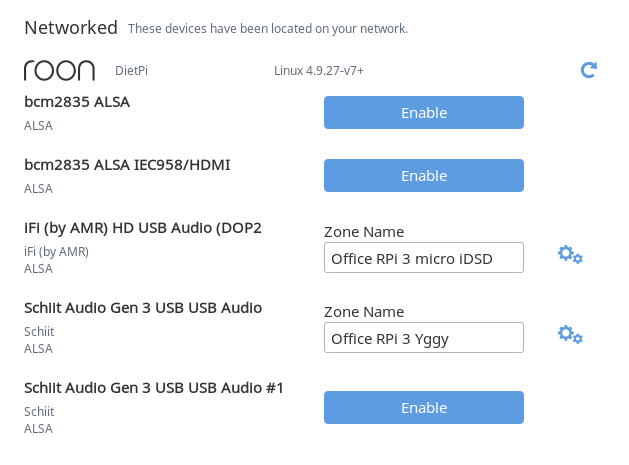 Thank you everyone for your time and assistance with this issue.