Untapped potential with Roon on Mac

So, the other week I found a great deal on a massive 2010 Mac Pro (12 core 3.46Mhz, 64Gb RAM) and got it set up as my Roon server. I mainly got it for other computing needs and I was surprised that while it was faster than the Mac Mini at many things, it wasn’t ever 3-4 times faster. Usually, it was only about 2-2.5 times faster, but that speed increase was helpful, nonetheless. So, I wondered if it would help get me over the DSD256 processing hump in Roon.

Disappointingly, it appeared to process DSP functions at the EXACT SAME rate as the Mac Mini! With the exact same song/DSP functions, they both operate at 129 percent CPU and failed to keep the song playing. In activity monitor on the Mac Pro, it shows how much processing power is left unused, yet Roon is letting the processing speed in DSP drop below 1x and the song stutters and eventually stops.

I see that there are options to increase computer usage for things like database management, but I haven’t found anything to help DSP functions tap into my 12-core goodness. Archimago has an article about this when he compares two different NUCs. He had to set the I7 machine to High Performance mode to make it better at processing DSP in Roon than the I5. Unfortunately, Macs don’t have that kind of setting that I have ever found.

So that is my long winded feature request: Can we assign more cores/increase usage of our computer processor in Roon towards DSP functions? Or can Roon be designed to draw more from the processor when DSP functions are lagging?

Already have it enabled in both cores.

The reason is that if you don’t enable the parallelise sigma delta option Roon will always use a single core no matter how many are available.

Yup, got that. As I said, both cores have it enabled. I actually don’t notice much difference when it is enabled, though. Maybe it doesn’t work with multi-core Macs? I don’t know.

Also note that this min spec is probably going to struggle with some DSP operations and DSD conversion is a heavy hitter in the DSP usage.

I hear you. Every feature listed on the Mac Pro is rated higher than the Mac Mini except for RAM speed (1333MHz vs 1600MHz), but all of that doesn’t always equate to an appreciable difference.

But still, this Mac Pro sounds like a jet taking off as it tries to keep cool when I am converting movies on it. When I am running lots of DSP in Roon, the cores don’t even increase in temperature. This implies there is a bit of capability left on the table for DSP processing.

I think there you have it. Team Roon don’t want the core to sound like a jet engine.

I would love it if I could choose the level though. That would be nice since the computer isn’t in the same room anyway.

I was thinking about that too. These Xeon processors are a few years prior to Ivy Bridge and it might just be that Roon was never designed to utilize their multi-core processing. That would explain why there is little to no benefit enabling the parallelize sigma delta modulator. Shame. But they do let you know the minimum reqs and it still operates great even on this old tech. So no complaints.

They have said Roon does not operate any better with more cores, two for normal use and max 4 for heavy DSP and multiple endpoints. This is why Nucleus is not much more than 2.

As I look into this more, they do say that.

I just want the DSP to function at the same level the database management does. I can tell that throttles the CPU up when lots of new music is added, and activity monitor shows it using 300% of the CPU. If that part of roon can stress the system a bit, then other parts of Roon likely can, as well. They seem to place a deliberate limit on the DSP processing, though.

Passmark isn’t the end-all of how fast a machine is, of course, but on that metric alone, that 2010 Mac Pro packs about the same punch as a current Nucleus + . It does have a TDP 190w instead of 28w, though, so that makes it a much more effective space heater.

I appreciate everyone’s input on the finer points of comparing intel processors, but I’ll get my feature request back on track…

Never mind the mac mini, or NUCs, or any other processor out there. Let me focus on just the Mac Pro I use now. The following picture shows the activity of the Mac Pro after I dumped 3000 new songs into Roon: 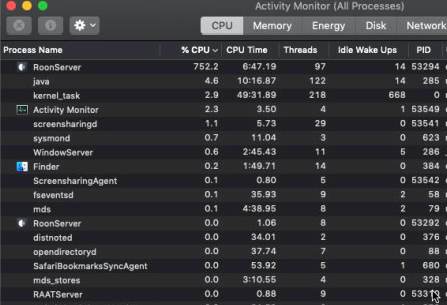 You can clearly see RoonServer absolutely caning the CPUs to get the database functions completed. It is effectively running 8 cores because I told it to (it is a selection in settings). Furthermore, it is working great. This is an example of the Mac Pro completing a task 2.5 times faster than the quad core. So, RoonServer isn’t just spinning its wheels without result.

During playback there is nothing I can do to get the CPU use over 150%.

Can I be allowed to assign more cores to playback processing like I can for database processing?

If not, I will get over it, I am PCM guy after all and I also follow the teachings of the Dread Pirate Roberts:

“Get used to disappointment!”

You could use HQplayer to do upsampling, it might allow more cores to handle upsampling. But you will still end up with fans running hard, significant excess energy being used, a cost to buy extra software and for no audible benefit (upsampling is marketing, appealing to your, mine and everyone else’s bias that higher values are better).

Free yourself, play your files at native res, turn it up a few dB and enjoy. Keep a candle burning for those poor brothers and sisters that chase the upsampling dragon for they are misled, tricked and overly contribute to the wasting of energy.

It is a Mac Pro from 2010. Differences in processors are not only there core counts, clockspeed and busspeed but more importanly their extensions to handle instruction sets. Specially for encoding, dsp processing etc. A lower clock speed processor with the right extension can be a multitude faster at these tasks. That’s what sets newer cpu’s apart.

During playback there is nothing I can do to get the CPU use over 150%.

Try setting up a bunch of VMs to use as endpoints, send a bunch of different tracks to 'em with similar settings, preferably something perverse that involves DSD-PCM-DSD conversions, and get ready to take your shirt off

When I am running lots of DSP in Roon, the cores don’t even increase in temperature. This implies there is a bit of capability left on the table for DSP processing.

If you want more demanding algos, HQPlayer has you covered. Those’ll barely run on a high-end gaming PC, and I’m not sure they’d run on a mac, because nVidia…

With Roon itself, as long as you don’t have dropouts, your machine is fast enough.