I have an issue with an album which shows up 2 tracks as untitled despite there being suitable metadata and an Allmusic entry. 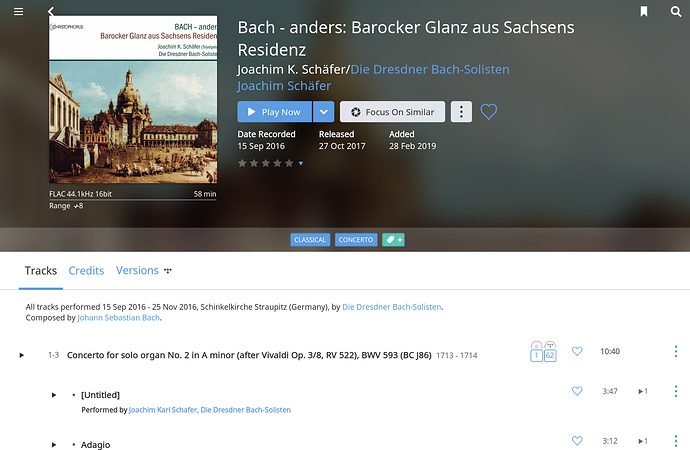 The Allmusic entry is here

My Metadata has a title, 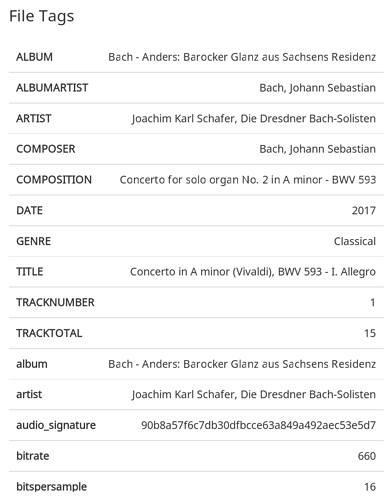 and I am preferring Roon’s data for the title

Try as I try I cannot get these 2 tracks to display! I have tried preferring my data with the same result.

Any thoughts or suggestions please?

by default Roon will use the movement titles for compositions – and not what’s in the track title entries – if it could identify the composition in question. So the reference in allmusic would be this:

Concerto for solo organ No. 2 in A… | Details | AllMusic

Find composition details, parts / movement information and albums that contain performances of Concerto for solo organ No. 2 in A… on AllMusic

You’ll see that the first movement - while assumed to be an Allegro - is not explicitly identified as such. Probably the (original) sheets didn’t provide a movement title. See also here:

If you want to override this I believe your only choice would be to use the multipart grouping from files (on album level) - but that has often a bad effect on identification of compositions.

So [Untitled] is most likely correct - even so it would be a nice improvement if Roon would show the assumed movement title instead of just [Untitled] if it’s commonly known. Maybe like this [Untitled (Allegro)].

Thanks for the insight, I understand now why my edits were in vain!

It would be nice to be able to manually edit the movement, especially as the information is in the metadata.

It’s not a biggie but I like things to look right and noticed this when playing it earlier.