I realise that there probably isn’t any point in doing this anyway, but I’m just wondering why the Sample Rate Conversion is greyed out on my BS Flex endpoint but not on others? More bizarrely, I don’t think it was like this to start with but does seem to be now.

Not a big issue - more out of curiosity than anything else. Anyone else have the same?

Is the Flex limited to 48khz?

Early Bluesound firmwares did limit to 48kHz, but this has been resolved since then. What is the BS firmware version on your Flex?

Also, when you say Sample Rate Conversion is greyed out, what do you mean exactly? In the DSP Engine for the Flex zone? Can you provide a screenshot of what you are seeing?

Thanks for the quick replies. BS Version identified as 2.12.4, RAAT SDK 1.1.15. Screenshot below - you’ll see that I can’t change the value in the Sample Rate Conversion drop-down. 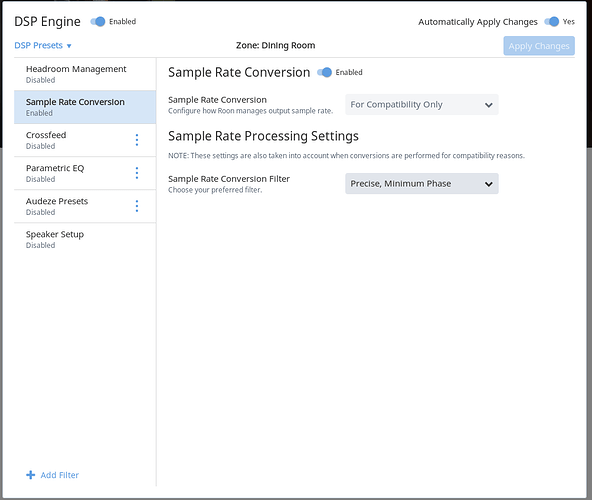 You should have a look in “Audio setup” and make sure you allow more than 48khz sample rates there.
It should’nt be an issue. I upsample into my Vault most of the time.

Thanks - that proved to be it - I had Max Sample rate and Max bit depth set to “disabled”. Setting to 192Khz/24bit respectively solved the issue.

Now I just need to work out why I seem to have some network issues with RAAT that I don’t have with native Bluesound at this resolution!