Usability of track metadata ordering tool needs to be enhanced

Trying to put in order the tracks of a 2-disc album where literally not one track is in the right position makes my fingers cramp and my head ache. This is the most annoying ‘feature’ of Roon and must be re-implemented to make it easy to move and arrange the tracks. This has been mentioned before, I believe, but after messing around for more than an hour to get this straight I have no wish to seek old threads. 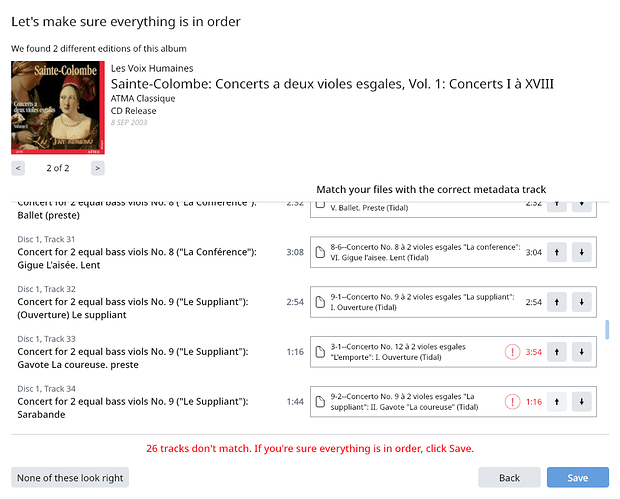 Yes, has been mentioned before. Seems to have been forgotten about…Maybe it doesn’t get much use, so is low priority?

Agree. This is very time consuming, rendering it useless in a multidisc set.

so is low priority?

Hope not, as this is appalling. Not only are there not few albums on the streaming services with messed-up track order, but the offered user interface to put them straight is horrible. This is not worthy of Roon’s reputation and goals.

Agreed re appalling, but Roon do not publish a priority list/roadmap. I have been a Roon user for 3 and a half years and I don’t think that part of the UI has changed in all that time, despite requests to do so.

Roon do not publish a priority list/roadmap.

And they don’t submit their software to usability tests, either.

It’s by FAR the worst bit of roon. If sorting the metadata means using that tool then my metadata remains unsorted.

Instead of using Roon, I recommend MusicBrainz Picard and Mp3Tag applications. Both of them will allow you to pick correct release of the album and sort tracks if it is necessary.

And how do I do this for Tidal or Qobuz albums I wish to save in my Roon library?

If sorting the metadata means using that tool then my metadata remains unsorted.

Same here. About 11.5% of my local library remains “Unidentified”–unmatched to Roon’s metadata database, but I don’t stress about it. These albums all play just fine, and the metadata that I’ve embedded (mostly with dBpoweramp) is good enough for me to find things.

Since JRiver and Audirvana don’t offer any cloud-enriched metadata, 88.5% of my music collection is in a much nicer state within Roon than when using other applications, so there’s that.

Instead of using Roon, I recommend MusicBrainz Picard and Mp3Tag applications. Both of them will allow you to pick correct release of the album and sort tracks if it is necessary.

I totally agree. The place to invest time in grooming metadata is with embedded track metadata, not Roon’s database. Improving embedded metadata means that your library will work nicely with all sorts of players (JRiver, Audirvana, USB Audio Player PRO, etc.). Plus, you may not be using Roon five or ten years from now. If you move away from Roon, all of the work you did in Roon’s database may be lost since Roon does not touch your music files.

I totally agree. The place to invest time in grooming metadata is with embedded track metadata, not Roon’s database.

David, you misunderstand. This is not about my own local tracks. This is about albums from Tidal/Qobuz with completely messed-up track order. There is no other option as to use Roon’s deplorable tool to get the track order right - that is, order and assign the correct metadata to the tracks.

It would not in my wildest dreams occur to me to use Roon’s tools to tag my local files.

So please, keep on topic and rather help to put some weight to Roon’s need to rework this tool.

You are absolutely right,

This part of Roon is the biggest laughing stock by friends who find out what Roon costs. One friend kept playing with it and litterally didn’t stop laughing for five minutes. He had never seen something implemented so badly in his entire life, neither have I. It is a total shame that this still exists.

I haven’t been around long enough to remember if this tool has been present from the first versions of Roon. But that it is included is a clear indication that Roon staff knows that there are albums on the streaming services with messed-up metadata order and that there is a need to assign the right metadata set to the tracks of those albums. So, when you set out to address such a problem and develop a tool to do so, why not implement it in the first place with usability in mind? To me this seems like a hammer without handle… you can use it to hit, but it’s a tedious affair.

Where do you access that screen? I’ve never run into it.

Hi @Akimo, I’ll try and show you the purpose of this screen:

Say you select an album on Tidal or Qobuz and you find out that the tracks are in evident disorder. You can then try and use Roon to search for better metadata - often for those albums several metadata sets are available:

Then you select the appropriate album from the suggested album list and the screen pops up where you can match metadata to album tracks. See how for this album there are two metadata sets available? The first one is the ‘default’ set presented by Roon. Look at the track list on the left and see how the tracks are in evident disorder. Different movements of various compositions are interspersed in senseless disorder. 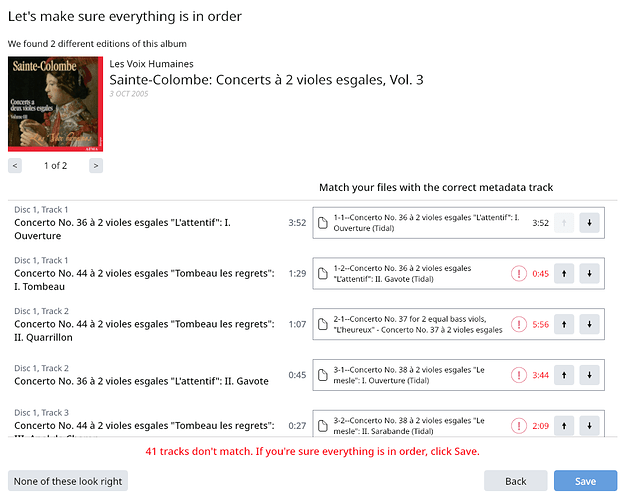 Cycling to the second metadata set presents us the tracks in order: 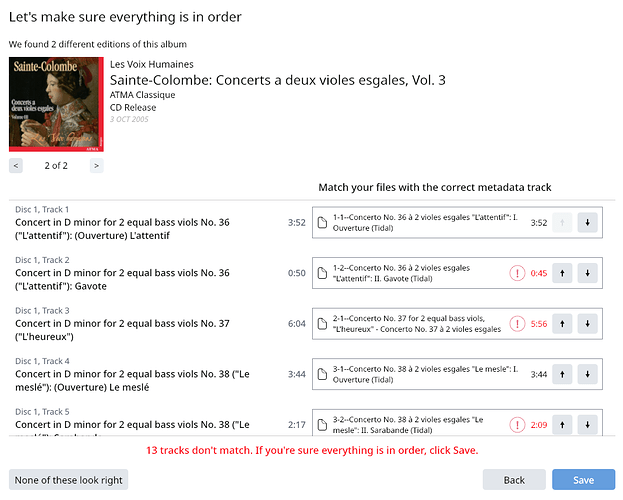 But now, the metadata on the right side doesn’t match with the tracks on the left - well, on my screenshot they do match, as I already have done the work moving them up and down, matching every track on the left with its corresponding metadata set on the right. And doing this is extremely tedious if there are more than a handful of tracks to match. The tool is very badly designed, making an otherwise easy task unnecessarily difficult and time-consuming.

So, as user, you are being hit two times; first with an out-of-order default track listing you’ll have to try and put right, and then by a tool which is no more than a clutch. This has been observed by many users many times before, but at Roonlabs folks seem to think that the offered tool is good enough. I agree with others who have pointed out that this is the single most appalling user interface solution in the whole Roon system and should at good last be addressed.

I agree with this, and still fail to understand why there is no sign of it being addressed. My heart sinks every time I find I have to use this stone age tool.

Not used it with Roon but in my iTunes days etc I used and still do now and then.

Phil, again - this has nothing to do with tagging your own local files. This has to do with matching metadata sets to albums tracks on albums where the available metadata in Roon is out of order.

My local files are all duly tagged and I can always prefer my own file metadata above Roon’s cloud metadata - but that is not an option with albums from streaming services.

So I’ll say that tagging my local files also sucks. I have long since tried to forget about this “feature” since I finished with my local files, and I’ve never run into it for tidal albums. Yet. But I will concur that it is just plain terrible. Feels like an intern and a week (with reasonably modern toolkit) could get this done way better with minimal supervision.

Can I suggest putting this thread into feature requests, and retitling it something descriptive like “track ordering user interface needs vastly improved UI”. I’m not a moderator. But I agree this needs to be looked at.