Hi Guys, I have roon installed on an INTEL NUC. I am using a SOtM SMS200 Ultra neo special edition player which is connected to my Chord Dave using USB. I was thinking of getting an mscaler, but someone suggested I should get a USB reclocker and specifically Mutec 3+ USB which is significantly improve my sound and its cheaper than the mscaler and it would eliminate the need for an mscaler. Has any one used a Mutec 3+ USB here? THoughts? If I decide to get the Mutec, should I remove the SOtM from the equation and directly connect my NUC to the Mutec to the Dave? Or leaving the SOtM will give a better sonic benefit?

I have an M Scaler and a DAVE. There is absolutely no way the MuTec reclocker replaces an M Scaler, not in a million years. The Mutec is a pro-oriented box designed to convert all sorts of different formats - USB, s/pdif, AES, so there are lots of different connections, and do some sample rate conversion. The reclocking is kind of a side effect of all the conversion possibilities. The M Scaler is a 1 million tap upsampler that, ime, has an extraordinary effect on your music. So, I would advise you to save up! At least try both before you buy either.

Just to agree with Jez, the Mutec is not a replacement for the M Scaler. If you want to try something similar to an Mscaler, setup another PC (not ROCK) and run HQPlayer: chain would be NUC> ethernet>HQPlayerPC>USB> DAC.

I do have an MC3+ USB and while it’s excellent at what it does, as @Jez and @Rugby have said it’s designed to do something very different to the M Scaler.

Thanks guys. The reason I ask is, I came across this post in a fb group 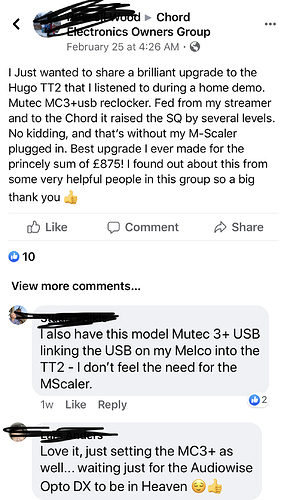 I have a Mutec, which I use to change formats and to convert my few DSD files to PCM.

Although the Mutec does re-clock, among many other functions, it isn’t an M Scaler.

The next question to be asked - Is an M Scaler necessary? Some say yes, some say no.

2 of us short auditioned a Dave with m-scaler and we where to both write Y/N on paper to the question 'better with m-scaler? ’ using the same headphones.

We both wrote No.

That said a HugoTT2 with m-scaler was a Yes. In fact with headphones the TT2 and m-scaler, I wonder in a blind test if we could have reliablly heard the difference to a Dave?

The Dave USB implementation is good and products like the mutec do provide a clean signal in good shape to their outputs. Singxer SU-6 for example (which I own).

@Rugby I’d like to know more about HQPlayer. Is it a replacement for Roon as it can upsample? I have a SOTM SMS200 Ultra Neo which has a HQPlayer in it. Does this mean I can use a HQPlayer without having to install it on a PC? THis is my current config:

I believe that is just the NAA (network audio adaptor) software. You would still need to run HQ Player on a Windows, Mac or Ubuntu machine and set the output to the SOTM NAA.

Is it a replacement for Roon

Not at all, imho. It is an upsampler with a tremendous amount of filter options. Potentially requires a rather capable PC to run.

That means it can be an HQplayer endpoint, HQP uses it’s own protocol called NAA.

You should give this other thread a read if you are interested:

Ive been doing a lot of nightly listening sessions comparing the sound of Chord Electronics Hugo MScaler with HQPlayer filters - both setup as PCM. I have a well tuned DAC-direct loudspeaker setup in a mid-field listening room. I run Audiowise, so I used all my RF isolation kit to maximize transparency. There is sentiment that the extreme length of the sinc filter used by MScaler is extreme overkill and introduces some false euphonics. Not everyone agrees what sounds best. Still, there is good …