That is a much more exciting answer than I expected !

Regarding the improvement of room correction, 100% agree. Difference for me is it’s all done by HQPlayer as music plays. For any source I feed the RME. Correction filters created by Audiolense XO which includes DSP crossover, individual driver time (phase) alignment at listening position.

But I’m not sure the HQP NAA image works with Allo USBridge Signature.

Can’t unfortunately. The USBridge Sig is based on RPi CM3 hardware which is Pi3 hardware and there is no longer Pi3 NAA support.

Hope Allo make a CM4 model and then maybe we can use NAA OS built for RPi4 - maybe ask them ! You can use DietPi with 64-bit NAA on it now, and it should sound great. I really like DietPi, it’s very very minimalistic, hardly any background processes. Other than NAA OS, it’s probably the next best thing in my experience.

And I’m not sure the clean USB on USBridge Signature is bi-directional, so I can use it as USB input. Things to find out the next weeks.

Interesting question. I don’t think so but worth asking Allo

Good day to all . I recently tried the free 30 day desktop version of hqplayer . I am delighted ! I am using Gustard X26 pro (2 pcs ess9038pro). Lenovo laptop as source. In HQPlayer settings I set adaptive output rate, my DAC supports it, I convert everything to DSD256. although my DAC supports dsd512 sometimes shuts up with it, probably the laptop is weak…

Basically I use the ROON+TIDAL+HQPLAYER bundle, I really like it, I get the maximum. In principle, I don’t need other sources, but I would like to be able to sometimes use Hqplayer along with youtube to watch live versions … I re-read the entire branch and basically understood how this can be done in several ways. video streaming from youtube, how much the sound can lag behind the video?
I am not interested in other streaming without video as my ROON media library is quite large and everything I need is in TIDAL

It’s just that you need to buy additional equipment to check it yourself. So I want to know who did it. It just may turn out that the sound will lag far behind the video and this idea will turn out to be completely unusable … I tried 2 more versions of the virtual cable program to bring the sound from the browser to hqplayer but could not do it

video streaming from youtube, how much the sound can lag behind the video?

Hi Igor, there is too much lag. You will have ‘lip sync’ issues unless your monitor/screen actually allows to add delays to video.

I think LG TV’s allow this but it’s not common.

It’s just that you need to buy additional equipment to check it yourself. So I want to know who did it. It just may turn out that the sound will lag far behind the video and this idea will turn out to be completely unusable … I tried 2 more versions of the virtual cable program to bring the sound from the browser to hqplayer but could not do it

The method I shared using Blackhole is for Mac.

Unfortunately I don’t use Windows. Maybe someone else will share.

This is where using the RME ADI-2 for HQPlayer “input” really really shines.

Look closely at this pic.

I am ‘casting’ from Amazon Music HD app to WiiM Mini streamer which has optical output to my ADI-2.

You can see there are no cables attached to iPhone and incoming sample rate on my ADI-2 is 96kHz (correct for this album).

I can even just talk to my Echo Dot and Amazon Music UHD goes out of WiiM Mini, then through HQPlayer and then room corrected speakers or EQ’ed headphones , bit perfectly up to 24/192k

The future is now ! 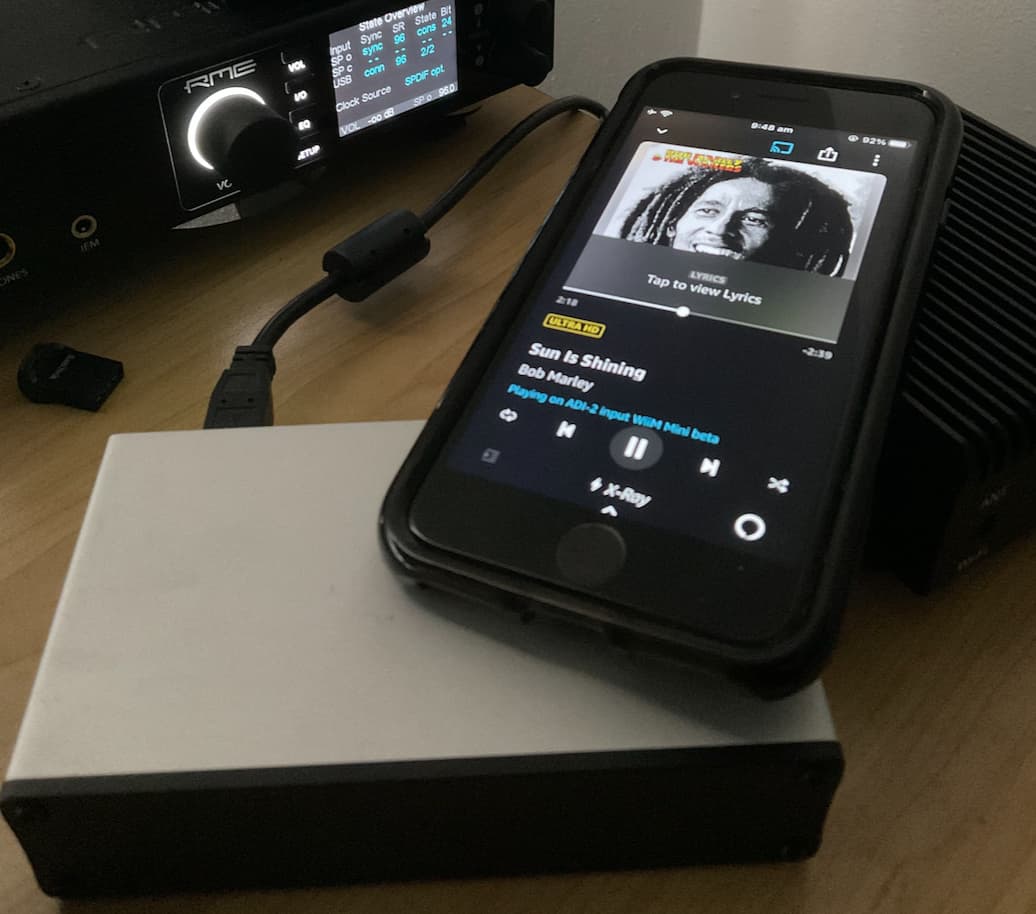 So I know an RME ADI-2 can’t currently be used with single NAA for both NAA input and NAA output.

But is it impossible?

The ADI-2 itself can (bi-directional USB) ? But NAA at the moment can’t

Is this something you could try specific with ADI-2?

Would make ADI-2 much better value proposition as an input, if it can be used with same NAA for output.

It cannot run at two different rates simultaneously. In order to do that, it would need to have two separate clock domains and expose two separate UAC devices. So running full duplex is not very useful for typical HQPlayer use cases (because input and output rates must be same).

Roon really needs the ability to ingest additional signals…. Either digital software, via interface or similar.

You shouldn’t need to buy additional software to do this.

Those running digital crossovers in Roon either via procedural or convolution are input hamstrung.

How much is HQplayer to enable interface input functionality and handling of convolution crossover outside of Roon?

And will Hqplayer allow spare spdif or toslink inputs on my Muto mk5 lite to be ingested into HQplayer>convolution crossover?

And will Hqplayer allow spare spdif or toslink inputs on my Muto mk5 lite to be ingested into HQplayer>convolution crossover?

Likely yes, but with manual rate control, unless their ASIO driver supports rate slaving. Which is not usually the case. (it is optional feature in ASIO drivers)

I use the interface driverless (class compliant) with Ubuntu atm. Sampling rates change without a need for drivers or ASIO.

I’m not against fixing sampling rate at 192khz. But I’m not interested using Windows in my system.

You still have the Linux kernel UAC ALSA driver in play. For digital inputs (S/PDIF and AES/EBU), sampling rate is determined by the source device. Not by the software using the audio interface through ALSA. At the moment ALSA expects application to set the sampling rate for the device, not vice versa. Same applies to CoreAudio on macOS and WASAPI on Windows. Only ASIO drivers on Windows support sample rate slaving properly, but even there, that is optional extra and many drivers don’t do that. This limitation also applies for the USB Audio Class standard. In addition, you may need to adjust USB device clock settings through ALSA when using such sources, so that the device is clock slaved to the source instead of using it’s internal clock.

However, for RME ADI-2 and RME HDSPe series, workaround for this has been implemented in the Linux driver and HQPlayer has special support for it to allow automatic rate change detection. (I did the ADI-2 USB support implementation and HDSPe implementation was there already before)

This means that with most devices, you need to match the sampling rates manually when they change. If your source is fixed rate like Spotify or old school CD spinner, it is not an issue though. Or something like ADC where you determine the rate.

I use the interface driverless (class compliant) with Ubuntu atm. Sampling rates change without a need for drivers or ASIO.

For D to A output yes, but that’s not special.

Different story with the digital inputs if source material is changing sample rates.

At the moment I am beta casting direct from Amazon Music HD app on iPad, straight to WiiM Mini Streamer.

I can do the same with Apple Music Hires but that needs cables connected to the iPad.

No cables connected to my iPad casting Amazon Music HD at the moment.

Sounds cool.
I had an RME ADI 2 DAC fs, sold it a while back.
Using up to 8 channels these days… so the ADI isn’t helpful.

That WiiM mini measures quite well via toslink…

Using up to 8 channels these days… so the ADI isn’t helpful.

You may have mistaken what I’m doing and what Jussi wrote. The ADI-2 is for input into HQPlayer, not output…

The ADI-2 input feature is brilliant for 2 channel sources where you have sample rate changes and want bit perfect playback.

All that matters with a TOSlink source is bit perfect playback

Once you have bit perfect playback, the only measurement that’s important is the D to A

The WiiM’s optical output is bit perfect up to 24/192. There’s no other measurement required for the digital output side.

Hi guys
I tried my best to read this thread but at some point gave up trying to map my setup to the described scenarios.
I should have one of the simplest setups trying to stream bit perfect audio from my iPad Pro (last lightning port generation) to my Up Gateway Atom Mini PC USB3-port which is running Jussi’s Intel-NAA-bootimage.
HQPlayer Desktop 4 latest version is running on a Mac mini M1 in the network.
No issues streaming from Roon to HQPlayer in that scenario but now I want to try playing Apple Music from my iPad Pro.

I’ve adjusted the BIOS settings on my Up Gateway NAA to PCI etc as mentioned at the beginning of this thread.
What I couldn’t understand from this thread is how to specify the UAC input on HQPlayer Desktop (not embedded!) as I don’t know how to find and edit a hqplayerd.xml on the desktop version as it’s just a daemon, or is that input yet preconfigured on HQPlayer Desktop so I just need to select it like this? 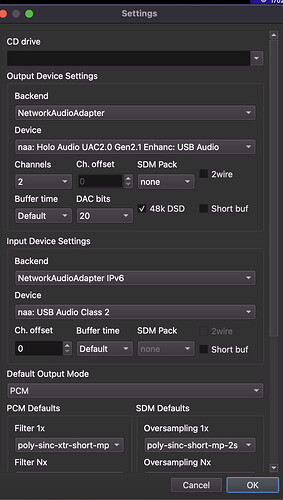 image866×1526 185 KB
When playing music on my iPad Pro while the NAA is powered on (and showing the usual DSD1024 on my connected Holo Audio Spring3 connected to the Up Gateway NAA indicating that the DAC connection is established) I cannot select any other target on IOS but my iPad or iPhone respectively Airplay destinations in the network,
Shouldn’t there be some unidentified device in the IOS drop down list which I need to select regardless of the HQPlayer Desktop config so the issue is yet laying on the UPGateway config side?
Thx for reading
jussi_laako (Jussi Laako (Signalyst)) July 11, 2022, 9:07pm #807

First, I’d like to confirm that you have connected iPad to the Type-B micro-USB port on the UP Gateway, through Lightning-USB adapter dongle (Camera Connection Kit or similar). And not to the regular Type-A USB ports on the UP Gateway.

Second note is that you cannot use same NAA for both input and output at the moment. For such, I’d need to extend the current networkaudiod with such capabilities.

Otherwise, your settings look correct. You then need to first start playback from UAC2 source in HQPlayer. Only then HQPlayer will appear as a DAC on USB. When you stop, it will disappear again.

In order to start playback, you need to select the audio: source URI and press enter so that it gets loaded on the transport. Then you can press Play in HQPlayer - that will start processing audio from the UAC2 input to your output.

Thx for your reply!
Yes, I am using the cck.
You said NAA cannot work as both input and output.
What does it mean for the HQPlayer settings I’ve posted before?
Anything to be changed there?
Seems that HQPlayer is stuck in that config with turning circle symbol on Mac running the HQPlayer desktop.
I can only access the settings once I am turning off the DAC and HQPlayer is then aborting the search and saying " 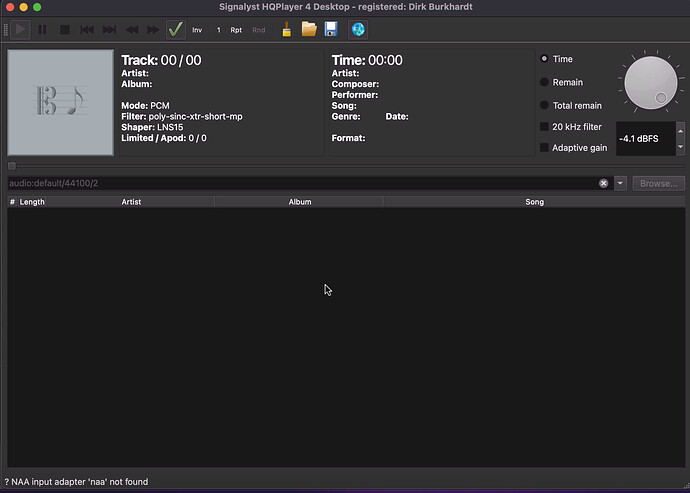 image2046×1464 196 KB
NAA input adapter “naa” not found.
Once the DAC is on, I am getting that stuck turning circle also after selecting one of the proposed URIs from the dropdown…

Edit:
I managed to select an URI and hit play but still no different target visible on IOS device 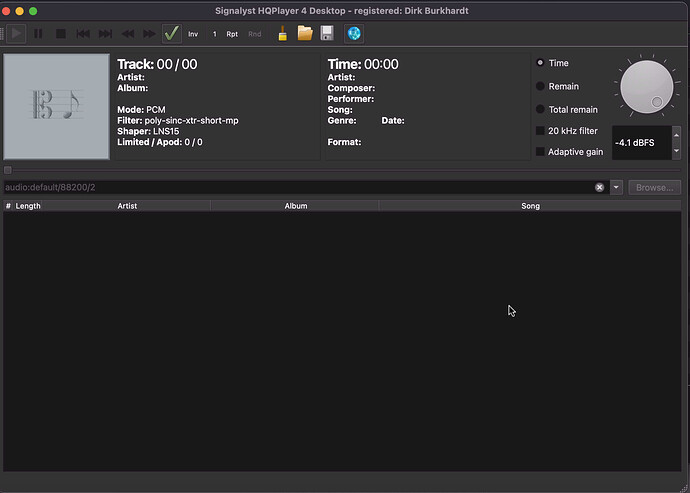