Using MacBook Pro as a Roon Remote with SonicTransporter

Is there a version of Roon Remote for a device such as my Mac Pro? I used to be able to play music through the system output on my Pro (through the desktop speakers) but I can’t seem to do that any more. Using Roon Remote on our phones and iPads, playing through the stereo, works fine. Is there a KB article on this? Thanks in advance…

Is there a version of Roon Remote for a device such as my Mac Pro?

There sure is! You can download the Roon application from our downloads page.

If you already have Roon installed on the Mac Pro, you would need to un-authorize the current Core and connect to the SonicOrbiter as the Core (see Run Roon as a Remote Guide).

Once Roon is running as a remote, you should be able to see your OSX System output in the Roon Settings -> Audio Tab. I would also make sure that you have added Roon to our OSX exceptions by following these instructions.

Do I need to delete Roon from the Mac Pro and re-download it, and then go through the setup process again? Something else? Thanks for your patience!

Can you share a screenshot of your Roon Settings -> Audio tab? You should see the OSX system output listed under the “Networking” section.

If the OSX System Output is not listed there, I would double check the firewall as mentioned in my earlier post and make sure that both Roon and RAATServer have been added as exceptions.

Additionally, if you have any firewall software in use this may also interfere with Roon locating the OSX output, so temporarily disabling this would be a good step to try.

If things are still not working as expected after double-checking the firewall, would you mind if I made the last few messages into a public support thread (everything after the accounts related issue)?

@noris - Sorry this has taken so long to reply - summer travel intervened!
Today I tried to sort this out. I reinstalled Roon on my Mac Pro, renaming the database folder per instructions so the new install would create a new database. When I started Roon I was given two choices - use SonicTransporter as Core or my Mac Pro as Core. There was no option to use the Mac Pro as a Remote, which is what I am trying to do. When I selected the SonicTransporter (which is what I want to use as Core) the only Output option is my stereo - I have no option to use System Output and play on my desktop (which is at the other end of the house and a floor below the stereo). So, I don’t know what to do - the options shown in the Support web pages don’t show up when I try to set up Roon on my Mac Pro as a Remote!

Another issue: I purchased some music the other day and copied it to the Music folder on the SonicTransporter (which is where I am keeping the files that Roon plays from - I also have backups on my NAS) and they don’t show up. These are standard .WAV files. I have forced refreshes several times, and checked to make sure that Roon is watching the correct folder.

I have checked the Firewall settings. RAATServer is enabled for incoming connections, as is Roon. There are actually two entries for Roon - one has the Roon logo, and one has a rectangular icon like a tiny character-based terminal icon. Does this indicate there is duplicated Roon software somewhere? Should I delete everything from my Macintosh HD and start over?

per your question, I don’t mind if you make this a public thread.

Here’s the screenshot of my Audio tab. 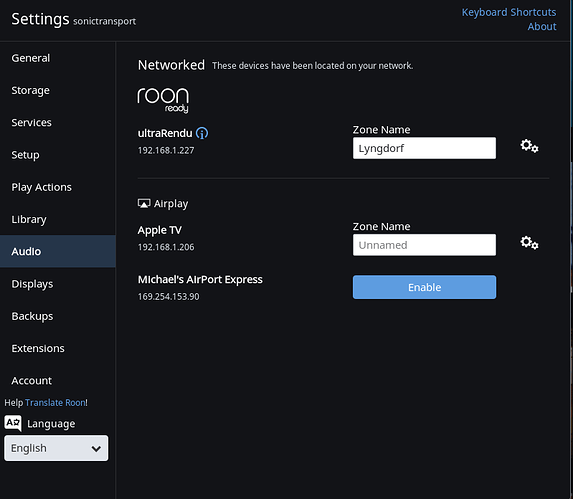 Yes, this is the correct behavior here, you should select the SonicTranporter as the Core and when the Mac Pro is connected via the “Choose your Core” menu, this indicates that the SonicTransporter is acting as the Core.

Here’s the screenshot of my Audio tab.

Since I do not see any “Connected to your Core” listing there, this indicates that a firewall is blocking Roon from operating properly. I have seen several firewall applications cause issues with Roon in the past (McAFee, Bullguard, Little Snitch just to name a few).

The easiest way to verify if these are actually causing issues would be by temporarily turning them off, if the local zones then show up as expected, you will need to add exceptions for Roon to these firewall apps.

You can also reinstall the Roon App on your Mac Pro, since this is only operating in Remote Mode and would not contain your Core information. If you wish to perform this step, a Backup is nonetheless suggested.

Another issue: I purchased some music the other day and copied it to the Music folder on the SonicTransporter (which is where I am keeping the files that Roon plays from - I also have backups on my NAS) and they don’t show up. These are standard .WAV files. I have forced refreshes several times, and checked to make sure that Roon is watching the correct folder.

Are these .WAV files showing up at all in Overview or in Skipped Files Guide? Do they contain any special characters in the path name?

I have one internal home zone inside my DSL modem/router. I have checked the router and there are no subnets within the network. I have Norton Antivirus but not McAfee. I turned off the Norton firewall (which was turned on). I did not see a way to enable the Norton firewall to allow Roon-related traffic. However, I opened Roon and clicked on Audio, and Lo! I was able to enable System Output on the Mac Pro, and I have music at my desktop! One problem solved.

I should add that there are no special characters in the pathnames. Example: You Are In You - Human Element (Kinsey, Garrison, Novak, Tuncboyaciyan) - 02 It’s Gonna Be Happen.wav

Thanks for the update and glad to hear that System Output is working with Norton disabled. I have found the following guide as how to set exceptions to your Norton Firewall, note this is a general guide, so instead of adding the specified program you will want to add Roon and RAATServer, which is contained in your Application directory.

Does triggering a Force Rescan of that storage directory have any effect? 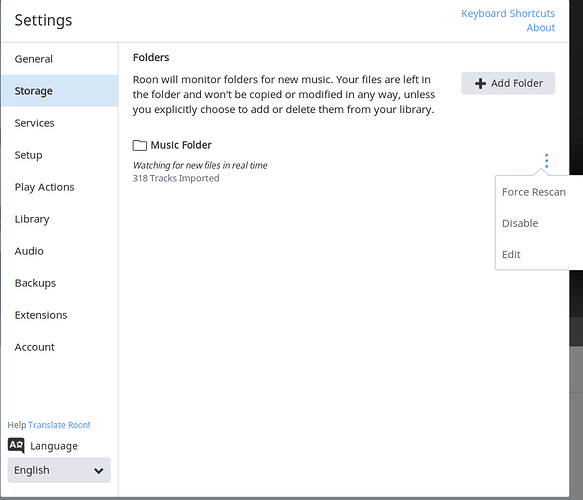 If Force Rescan has no effect, please private message me an example or two via Dropbox / Google Drive / Send.firefox.com to me and I can take a look if I’m able to properly import it on my end.

I ran an experiments. Here are the results:

In the past, I have purchased and downloaded lots of music, from many sources. HD Tracks, the London Symphony Orchestra, San Francisco Symphony, individual artists. All worked just fine to copy directly to the music folder and have Roon rescan the folder and pop them into the database. I have a fair amount of high resolution files I acquired this way. These are all still visible and playable. Maybe there was something about these particular files that prevented Roon from recognizing them as .WAV files and incorporating them into the database.

In any event, consider case closed, and if I have similar issues in the future I’ll reopen the thread. Thanks for your help!

Thanks for the update here and glad to hear that ripping the CDs allowed them to properly show up in Roon! I will go ahead and close this thread as requested, but do let us know if you have any issues in the future, thanks!