I genuinely love the passion shown by you and others, on this topic. But this topic is not one of life and death, fortunately.

I quoted your comment that hinted that the little transformers in ethernet isolate against everything - if that’s not what you were hinting then I sincerely apologize in advance.

My linked posts are just to someone who is highly qualified and respected, who is doing his own personal research at the moment and finding that things like leakage currents “sail right through” those little transformers.

I just love learning more about this hobby that we all love. Maybe things aren’t as we’ve all assumed all along - like this topic of the transformers in etherner cables. So I follow peoples like John’s personal research really closely. And for fun.

The topic of blind tests and whether we’d hear a difference is something else altogether and I’m not sure why I’ve been singled out here. I was one of the first in this thread to hint that BJC’s (their Belden 10GX series cables in particular) are all I really need.

In principle, I don’t disagree with what he says. It’s just the freaking obnoxious way

Ya I wish the points could be made in a friendlier manner. Frankie had the answer all this time:

We are talking about copper interconnects. When you bring up leakage currents in this context my mind immediately goes to the thought “is the poster stating that one copper RJE is going to filter out those leakage currents more than some other in spec copper based RJE”.

My first set of speakers were DIY Karlson Horns in 87. There is a lot of outright crookedness in this hobby / industry.

I’m a CCNP, MCSE, 3COM, Banyan Vines, the list goes on. I’m a hobbyist builder and speaker designer. This is my line in the sand. It wasn’t HDMI, it wasn’t USB, but it is Ethernet as I simply am a material expert from punch down to core routing and switching. I’ve implemented AVB and Dante on Cisco/Intel.

I’ll stand toe to toe with any one that thinks RJE’s that meet the spec matter SQ wise. Period. 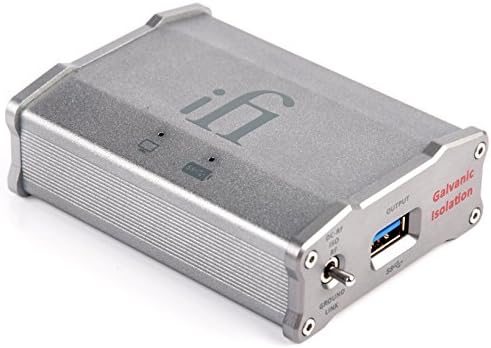 USB is one of the most widely used interfaces, however it is not optimized for audio applications. Signal quality will often be compromised by length cables, ground (earth) loops, and power supply and ...

I did Slim! I got the Uptone version, Iso Regen. Very similar but the iFi doesn’t need an external power supply which is cool. I’ve given my Iso Regen to my old man (my dad in case anyone else is reading this) because it’s cured the pops and crackles with native DSD256 from his Pi3, like we discussed in the iDAC2 thread.

Go on Slim, hit the order button. I know you want to

Tried an audioquest forest between router and roon core pc. Absolutely no difference whatsoever compared to the standard cat5 it replaced. Totally not worth the 75 euro’s. Ethernet cable subject closed for me.

The “little transformers” on Ethernet cables are intended to block common mode RF. They don’t galvanically isolate the equipment.

I am certain this is wrong! You’re saying each of the 4 TP’s is transformer isolated at every port? Crack open a typical cheap 8 port switch, I don’t think you’ll find 32 transformers.

Actually they are. But they are in DIL packages with each package representing a transformer with multiple windings. Other methods can be applied also like the isolation chips so popular in USB isolation gear but the principle is the same.

Yes they are. You’ll find Dual and Quadport packages. Many rated to 1500V

It’s what you think is certain, that simply isn’t.

I doubt you would lose $10,000 except by some awful statistical fluke, an elaborate cheating scheme (that amount of money would certainly make it worthwhile for someone to come up with one, if he could) or divine retribution for deadly sin #4, hubris. But your attitude is certainly not going to make any converts, or lure any takers.

A smaller amount, so as not to discourage someone from risking losing a fortune by shear bad luck, and less arrogance, may get results.

As a recovering audiophile I’ve got a couple of ‘audiophile’ ethernet cables knocking about so I thought I’d pass on my own observations of trying out three different ethernet cables, this afternoon, directly into my KEF LS50W’s (courtesy of Roon’s latest update). The big shootout:

generic 3m Cat6 cable that came with the KEFs (black, suitably dull for a stock cable)

a 1.5m DIY cable from some guy in Germany that I bought off e-bay for £40 (looks pretty, like a snake, with those enormous RJ45 connectors at either end like the AQ Vodka)

0.5m AudioQuest Cinnamon cable that my mate gave me in return for a couple of pints (gold-plated, red/black weave, and with… errr… directional arrows telling me which way to plug the cable in… but isn’t it bi-directional???)

Here’s my view after listening to several tracks I know well… the 3m cable is a noticeably harsher in the highs than the AQ Cinnamon… Nah, just kidding. There’s no difference at all. Seriously. None.

It’s not hubris. It’s confidence in knowing how this stuff works. It’s an informed position. Here is hubris:

" Me: Ethernet ports are transformer coupled. "

You: I am certain this is wrong!"

Don’t try to gloss over this. I’m an azzhole for pointing out people that think they are in the know when they aren’t?

I don’t feel like being tactful with a bunch of know it all’s that:

Not trying to start a war here, but I got myself some Wireworld Starlight Ethernet cable, and I like the results compared to the generic Cat6 I had. My perception is that improves the detail and the resolution on my setup (headphones).

Most of WW dealers allow for in home trial, so no risk for you guys to try. If it does not work / improve things on your setup, return it. You’re out only the shipping. PM me for a good WW dealer that gives a very nice discount.

I am now looking at ethernet switches that are discussed extensively over the CA forums.

Again, just my opinion. Please no judging. We all “vote” with our money.

I understand your point. There are good technical papers like Seimons ‘The Antenna Myth’, T.I’s ’ Reducing Radiated Emissions of 10/100 LAN Cabling’. Here’s a real myth buster: UTP Cabling and the Effects of EMI

I’ve also done some proof of concept videos. Here is one demoing a $350 3 meter WireWorld Starlight RJE and 98 meter CAT5e at $90: https://www.youtube.com/watch?v=anZeheEiff8&t=300s

The synopsis is that audio continues to play while I swap cables. Even with no connection we hear music. Did the SQ change? Get better, worse?

While many would think that’s a simple question and easy to answer, I still have yet to see a subjective audiophile answer this.

I found this useful. Covers ground loops, antenna effect, cable termination, and baked potato effect (I had never heard of this one).

I’ve been using Cat 6A S/STP I got for around $5-10. Each one came with it’s own measurements. I haven’t noticed any problems in comparison to Cat 5e and Cat 6 UTP I had been using previously.

Good read and backs up the other papers I linked.

Some take away from your link:

A shield reduces the effects of induced
noise for signals > 30 MHz. GREATER than 30 MEGAhertz.

You don’t really make your point by linking photos of PC boards with black boxes on them. Why don’t you instead link to a data sheet on one of the devices in question?

You see the repeated series of lego’ish dimension building blocks? Those are Ethernet Magnetic Transformers.

Let me google that for you:

You’ve also been told by Rik that Ethernet is indeed isolated.

You don’t really make your point by linking photos of PC boards with black boxes on them. Why don’t you instead link to a data sheet on one of the devices in question? Then I will humbly declare you were right and I was wrong.

At least they’re visible (with visible part numbers for googling) - another alternative is the MagJack - the transformer is part of the RJ45 socket so not a visible seperate device.