(After some trials I decided to hop on the bus for a subscription.
Though there are various improvements I’d like to see: Roon is fantastic!)

Four tracks of this VA album appears in the top tracks of Midlake (see screenshots).
The LateNightTales album was correct identified by Roon but displays Midlake as artist besides Various Artists.

How can I solve this? 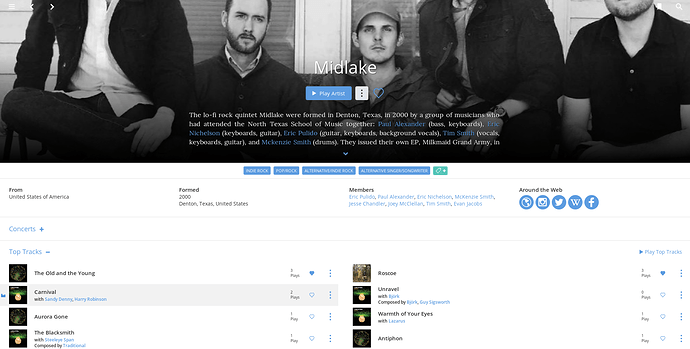 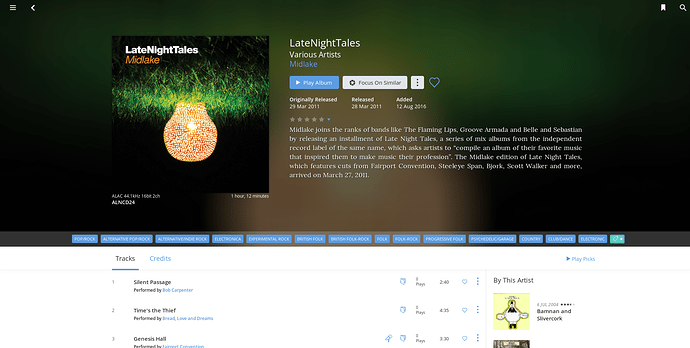 I also have several LNT albums and see the same behaviour. If the albumartist tag is ‘Midlake’ then what you are seeing is what I would expect to happen.

The artists for individual tracks are then shown as additional performers.

I expect various artists is shown because multiple artists appear on the album.

In conclusion, I’m not sure there is a problem to fix in this case, as the logic in Roon feels right to me.

To change this behaviour I expect you will need to change the albumartist to VA, but then Midlake won’t appear at all I guess, even when looking at the album
Nick

So, just to be clear, we’re talking about four or five different tagging elements here, right (some of which are formally represented by metadata)? The breakdown for me, allowing for a few hypothetical ways of approching this:

Perhaps we could look to classical music for inspiration here. How would the entity that arranges a series of classical suites on a compilation release (drawn from a few different works) be tagged by Roon? That assembling entity would be akin to the “curator” (Midlake) in this scenario.

As a slide aside, I use the focus feature based on the Label tag to create a bookmark for the LNT albums I have

Thanks for your replies, Nick & Michael,

To change this behaviour I expect you will need to change the albumartist to VA, but then Midlake won’t appear at all I guess, even when looking at the album

I’ve already set Album Artist to VA (it still shows Midlake beneath Various Artists) and my expected behavior is Roon would not show the LNT album on the Midlake artist page and certainly not displayed some tracks as Top Tracks.

So, just to be clear, we’re talking about four or five tagging elements here, right

Correct. Maybe indeed the approach of classical music could give some inspiration.

@Paulb I imported the Röyksopp LateNightTales compilation and I’m having similar issues. I don’t mind that the album artist is set to the curating artist (though perhaps LateNightTales would be a better pick for the Album Artist) but I do mind that the track artists are “Röyksopp, X”, where X is the actual performing artist of the song. That’s like taking “Mrs. Robinson” off of The Graduate soundtrack and listing the artist as “Dave Grusin, Simon & Garfunkel.”

I have the file medadata set up correctly, but I can’t find a way to bulk select the whole album and force all selected tracks to prioritize the file metadata for Artist, versus the Roon metadata.

Yes, I have some other LNT compilations too, same issues.
I’m looking forward to Roon 1.3, from what I’ve read in the community there will be a big upgrade in metadata handling.

That’s good to hear. I’m still going to forward this thread to a broader feature-request post regarding curated compilations. Something feels off about the current implementation, at least in regards to how Album Artist should apply to this type of compilation, but currently doesn’t in a logical manner. It’s an odd edge case, but certainly applies to more than just one or two specific albums.

I have 10 LTN compilations and there isn’t a consistent approach. Some are like Royksopp, but others show track artists correctly.

Of course, Roon is trying to make the best of the metadata it is provided with by AMG et al, so if the providers don’t have a consistent approach, Roon doesn’t stand much of a chance.

Some of the titles I have bought as direct downloads from the label, and even their tagging is inconsistent.

In conclusion, personal customisation is the only way we are likely to get a Cox sister approach we are each happy with.

For now, I accept the best that Roon can offer, and focus on listening to the music!

Can you describe how to configure the metadata manually? I assume I’m missing an obvious step, but I’m having trouble changing compilation tracks to “performing” artist or modify that individual track artist.

Hi Michael, o
Outside Roon: I use dbPoweramp to tailor music file tagging (all FLAC files)
The album artist is set to e.g. ‘Royksopp’
The track artist is set to the performer e.g. Vangelis (track 5 on this album)

In Roon, even where a match has been found, for LTN albums I have gone into the ‘Edit’ mode and under the ‘album options’ tab selected ‘Identify’
Once the correct album has been found via search (if needed), I then scroll through the various releases and try them all until I find the best fit.

An example screenshot is below to help describe what I’m talking about (I don’t own the Royksopp album, so picked a similar example) 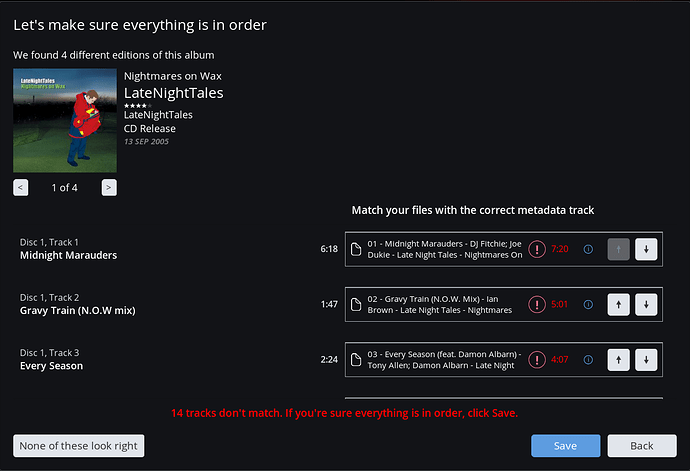 I don’t know how far of v1.3 is, but it would be great if there was a way to override this with tagging while we wait. I usually tag my compilations with the selector/DJ as Album Artist, and then the performing artist as Artist.

Seems logical to be able to display the album under the selector/DJ page, and still have it display (and even scrobble) the right performing artist…?