Ultimate Rock ‘n’ Roll Collection, these are the tracks listed on the album view, 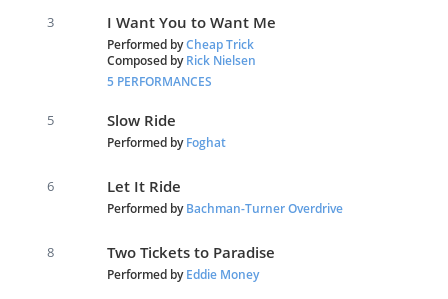 On the Identify album view it lists:

Same occurs for Track 4 on the “Bad Company” Artist page,

I am running Roon Server (Build 99) on Windows 10 PC, Files on a Synology NAS

Please let me know if you need more information, or maybe this is expected behavior.

I’m guessing this is because the artist has an album level credit on the album – if our metadata data providers have credited the artist at the album level (as opposed to the track level) this will be distinct from whether the individual tracks are present, and that same data will power the Appearances section. You can confirm by checking the album credits for the compilation.

Unfortunately, credits are not editable in Roon yet, although we’re hoping to implement that functionality along with other extended editing features later this year.

@mike - you are correct. All the artists on the album are listed as Performers on the Album level credits. Thanks for the explanation.

I have no doubt you will get these minor annoyances resolved eventually. This is the best UI experience I have seen in Music Management software (especially with Local and Streaming together) - that’s why I got a Lifetime membership. Keep up the great work.

Yeah, it’s very annoying when the metadata is not quite right. We’ll get there.

Thanks a lot for the kind words @krjtx, glad to help!