I love the product but getting frustrated with it’s usability. A few examples of what I’m seeing:

1 The inability to read Tag data - would love to use my tagged favorites (IE 5 Star). Roon let’s you use your tag data for certain fields - why not this? I know many users want this
2 Add Next/Add To Queue on my Roon Remote/iPad is doing the same thing (adding next)
3 Tidal integration - I have a large library but appreciate the depth this option gives you. However it brings in albums I do not want. And nothing I do can hide them. I followed the directions: right click the album, click Edit in the upper right corner, click hide album. It is still there. It has a tag of banned but I do not want to see it if I have hidden it (unless I query hidden albums)
4 Favorites - it is extremely buggy. Most often when I try to favorite a song when I am playing it (which is when you would want to favorite), it does nothing. This applies to my library & Tidal
5 When I focus on hidden albums I get 96 entires although I have only tagged 2. When I try to unhide one it does nothing

Hopefully this is my lack of knowledge & someone out there can help. And if not Roon is working on this. I have a decision to make soon on this subscription and would lean towards a lifetime if the product became a little more functional

For your third point one of two things is likely, either your Tidal account had favourites already marked in your account prior to roon integration or upon linking your tidal account you inadvertently added a tidal collection.

If the case is the second, information is available on removing here:

If you have tidal content that you don’t want in your collection I would either unfavorite it in Tidal or delete from roon. In roon you can bulk delete by selecting multiple albums and clicking the three dot button, edit, scroll down and delete. This will also unfavorite in Tidal. (Note: you can’t edit on phone apps)

To add to this and hopefully clarify some functionality, hidden and banned are different features. IIRC banned stops tracks or albums being played by the radio feature. Hidden is used by Roon to automatically hide duplicates, you can also hide albums yourself. There is an option in Settings --> General to control what happens with hidden and duplicate albums. I would start here with this once you have got rid of your unwanted albums.

Some of your issues are strange Frank. Particularly the favouriting and queue features, both work correctly for me.

Try a full reboot of your iPad, they are much buggier creatures since iOS 10 I fear.

Roon hides duplicate albums if you have more than one version, could this be the issue you are seeing?
It could also be the Tidal albums you added showing up like this if you already had some of them in your collection. Do as Matt recommends and see if that cures the issue.

If you have no tracks in your queue then ‘add next’ and ‘add to queue’ will do the same, can you describe exactly when and how you see this.

Hi Matt - I’ll try deleting any Tidal albums I don’t want and look at. I did have show hidden albums on by mistake. Looks like it is now removed the 2 I tagged and maybe some Tidal duplicates. I didn’t have much favorited in Tidal.

Thank you for the tips

Hi Russ,
I had tracks in my queue. Every time we selected add to queue it was added Next

Hi sjb - I reboot regularly but will reboot again.

Does it do the same whether shuffle is on or off?

Hi Russ - I had shuffle on. That might have caused that. Thank you

I think I duplicated this problem again with shuffle off. Reboot. Updated IOS

I had another odd occurrence the other day. I was selecting songs for the queue from my library, went to Tidal and selected a few more and it filled my queue with Tidal songs.

What controls the shuffle? After turning it off it apparently turned itself back on

I had another odd occurrence the other day. I was selecting songs for the queue from my library, went to Tidal and selected a few more and it filled my queue with Tidal songs.

Are you able to recall in detail how you did this? I’m wondering if you inadvertently selected a Tidal playlist rather than an album.

[quote=“Frank_DeMello, post:11, topic:24069”]
What controls the shuffle? After turning it off it apparently turned itself back on.
[/quote]Only the user can toggle this feature. I’m not aware of any other reports of switching on by itself. I suggest you monitor it and report back if it happen again.

I will experiment a bit today with this. Thank you

Another problem I am seeing - I have a Focus called Hidden that shows all hidden albums. Although I have hidden about 5 Tidal albums this now has 97 (even albums from my CD collection which I have hidden 0). I right click one of these albums, Edit and Unhide and it stays in this view.

What would cause this and how do I fix it?

Well there are two issues:

On the second question, it might be related to:
If you have “Show Hidden Albums” checked as OFF, all albums Roon considers “duplicates” are hidden automatically.

If you have set the status manually, you can use the Un-Hide option to un-hide them. You cannot un-hide albums that were automatically hidden. For that you would have to turn ON the Show Hidden Albums option in Settings.

On why albums are unexpectedly showing up in your Hidden Focus, to me that would suggest Roon is seeing them as duplicates. If you look at their track listing are you seeing the red “duplicate”?

Hello Daniel,
I do not have Show Hidden Albums checked off. I understand that it will now hide duplicates but I do not want any album in my library to be marked a duplicate (only Tidal). How does Roon select which album to hide?
Also the Unhide rarely works. I highlight the album/Edit/Unhide and it still is there. This Hide/Unhide is extremely buggy

These albums are marked in Red at the track level

Thank you for your help

If I have a duplicate in my library I check carefully first that I have one complete album and when satisfied, I delete the other knowing that it will be deleted permanently in my main storage.
You can choose the primary version to show. In the case you have a local and Tidal copy I always use the Tidal copies so the artist gets paid a little.
Thoughts

Can you capture some images of Roon and upload them so we can see what you are seeing.

Also take a look in the Roon Knowledge Base, it’s a really good source of information for new and experienced use a like. Try searching for “duplicate”

Just to be sure we are all on the same page as things can be confusing when things are named the same, I would like to review what should happen when the various options are enabled and what they mean.

First what do they mean.

Show Hidden Albums
Show Hidden Albums under Settings/General allows you to either HIDE when the option is set to NO, or SHOW when the option is set to YES, albums that Roon has detected as duplicates. If you have more than 1 of an album, say a CD and a Hi-RES version of Fleetwood Mac Rumours, then the highest resolution will be marked as Primary and all other versions marked as duplicates.

When this is set to NO, only the 1 album will be displayed in the album view, if you go to that album, the others can be reached via “Other Versions” button and you can manually determine which is Primary.

When this is set to YES, then all versions will be displayed on the album views. However, the duplicate will still be marked as duplicate in the Track Listing.

The option should really be called “Show Duplicate Albums”.

I think that the above interaction can be very confusing. To double check myself, I’m asking @Carl or @mike to make sure I havn’t mistated anything. 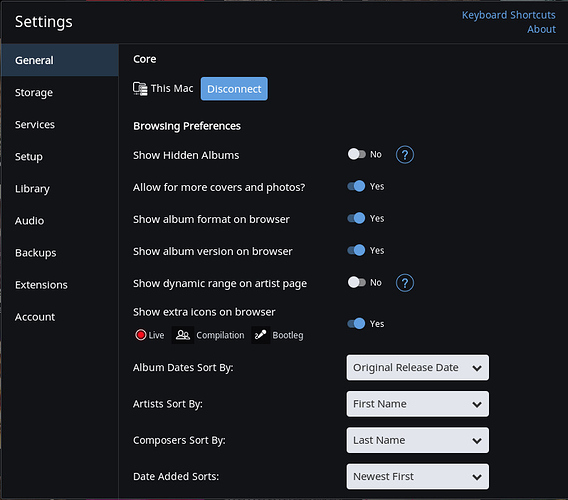 The option should really be called “Show Duplicate Albums”.

I tend to agree, and this is often a source of confusion. Would you consider renaming or even better adding a second display control option?