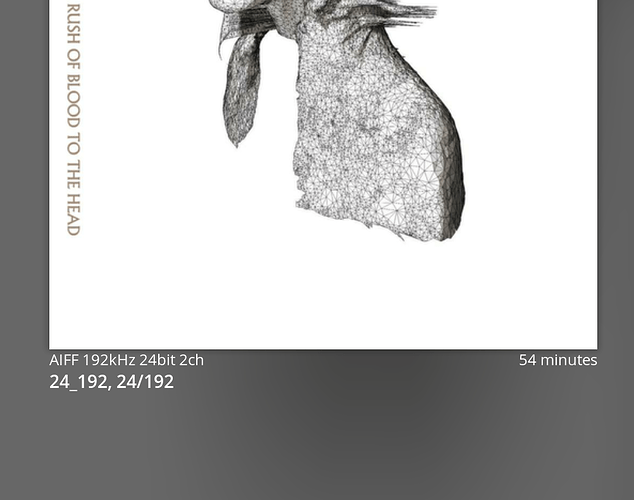 I updated to b154 today and something caught my eye that I haven’t seen before …
I still use iTunes for importing and editing my newly added stuff. I denote the version (e.g. here (24/192) added to the album title). (in the finder the album title has then (24_192) added …haven’t noticed that before neither).
What roon gives me now for the version is 24_192, 24/192. see picture!
This happens for all my 24 bit stuff … a bit annoying … is it because the new way that roon treats versions?
Can anybody enlighten me? thanks!

here is what it looks like in the finder …

If you added “24/192” in the version field of Roon’s metadata for the example album, then you will get what you showed in your screenshot.

the thing is it was all right before the update (or did iTunes change something?) … it was always showing just the 24/192 … correctly pulled from the album name in iTunes.

I would bet the “24/192” is the Version tag information in your music file and the “24_192” is Version information Roon is capturing from your folder name. Roon is then concatenating the file tag and folder name to make the displayed Version Information.

If you check it out and that is the case, the change your folder information to “A Rush of Blood To The Head - 24_192” removing the parentheses. That should eliminate the 24_192 from the Album display.

My point is: it worked perfectly well before the update without manipulating anything. now with the update it just shows the version information twice.

Regardless, how do you proceed from here? My suggestion would be to leave your iTunes album names and folder names as is. Then go into Roon, select the Album and click on the 3 dots and Edit. Now go to Edit Fields tab and scroll down to Version. Now edit it to what you want.

I have some Version information from my folder name, such as Deluxe Edition or Mono Remaster. I don’t use the Format (ie. 24/96), since you are able to get that information from Roon anyway. If you go into Settings>General and click on Show Album Format in Browser, it will show the Format on the album cover when you’re scrolling through albums. When you actually select an album, it shows just below the album cover anyway. If that’s good enough for you, then just select Blank when editing Version in the Edit Fields tab. Otherwise, type in the format info.

Are you using Roon organized folders? My guess it’s a bug in keeping the different versions apart (earlier the songs where together in one folder) the underscore is used for special characters.

@Greg
How do I proceed? Will wait till it goes away

btw: if I don’t put a version info on my iTunes 24-bit albums it will mix them up if I have the same album in redbook resolution.

You can mass edit the version field by going to album, focus, format, choose 24/192 and you’ll get all 24/192 albums. Select all, not sure what it is on the Mac as I don’t use them. Then continue with @Greg 's suggestion.

I’m not sure it will go away.

It’s probably not a bug, but designed this way. We would need to ask @mike about that.

Wanna know what I would do?

I would leave your iTunes alone and you also don’t want to edit the folder names of 1300 albums either. As Daniel @Rugby mentioned, you can quite easily edit all your high resolution albums at once in Roon.

But first, you want to be happy with how you want them to look. My suggestion would be to first make sure you go into Settings>General and click “Show Album Version on Browser” and “Show Album Format on Browser”. As you know Version picks up the bracketed info in your folder. Format will show the album format other than 16/44. 16/44 will show as cd.

So, pick one 24 bit albums on the very first page of your Album View. Select the Album and click on the 3 dots and Edit. Now go to Edit Fields tab and scroll down to Version. I would click on the blank and click save. You could type something in, but leave it blank first.

Go back into to the album view. Do you like how it looks. Click on the album, do you see the format just below the album cover. If that’s fine with you, we can go and Edit all the albums at once, as per Daniel.

Let me know how that goes before we get into Editing all the albums. You can also wait and see if Mike responds with info on the change that occurred last update.

is it because the new way that roon treats versions?

This isn’t new, but there was a bug fixed recently that was preventing this from working as designed in some cases. So, what you’re seeing now is a feature, not a bug

I’m not sure I have a better answer here right now. We are thinking about better library management and import tools that might help, but right now this is fully automated The feature is designed to preserve this information in a way that’s not overly obtrusive (like mangling the album title), and in this case, at least some of the info is desirable.

If I was in this situation, I would probably turn on Version display in Settings so you can quickly scroll through the browser and see which albums have information worth preserving. You might even select your whole library and scroll through once, deselecting any albums with version info you do want to preserve. Once you’re left with only albums whose version info you want removed, you should be able to edit and remove it all in one fell swoop, except…

I just checked, and there’s a (minor) bug here. You can only click Save when you’ve made an edit, and removing the “Mixed” placeholder text doesn’t make the Save button active 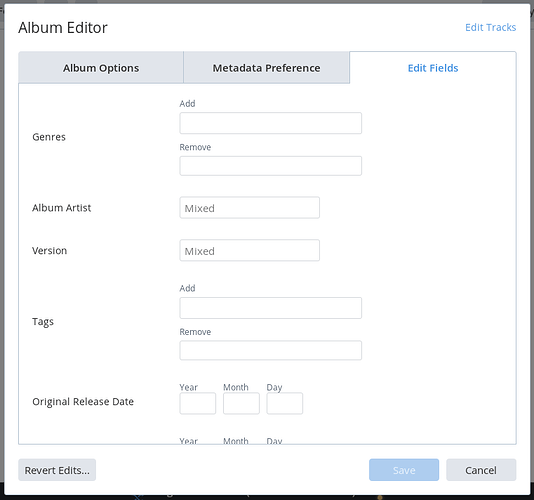 I’ll get that fixed, but for now, you can just type some nonsense there to make the Save button active, then delete what you typed and save the blank field.

thanks for the explanation @mike !
the problem (showing album version twice) only occurs when the album title (with the parentheses and the slash e.g. (24/96)) as shown in iTunes is not the same than the file that iTunes saves (with parentheses and underline e.g. (24_96)) and can be seen in the finder. if the album information in the brackets doesn’t have any special characters all is well and the version information is only shown once. I hope you can follow …

why does roon extract the version information from two places?
cheers
stefan

why does roon extract the version information from two places?

Because people have curated their collections to have information in different places. I do not use iTunes, so for me there is only 1 place Roon is grabbing the version information. The ability to use “[ ]” or “( )” in the album folder title to store version information and have Roon grab that information automatically was a basic and requested feature by many users.

One solution is to stop using the “/” in iTunes and use the underscore_ instead. Mac and PC Operating systems cannot use “/” in the real filename that exists on the hard drive as that is a reserved character; and that is why there is an underscore_ in the actual filename.