@support, one inconsistency that has been bothering me for quite some time is the fact that “view all albums” doesn’t show the “Top Result” — and as such not all albums. This is especially disturbing when trying to decide which version of a classical piece I would like to pick. Why is this, and will this be solved in the upcoming UI improvements? Some screen shots to illustrate what I mean: 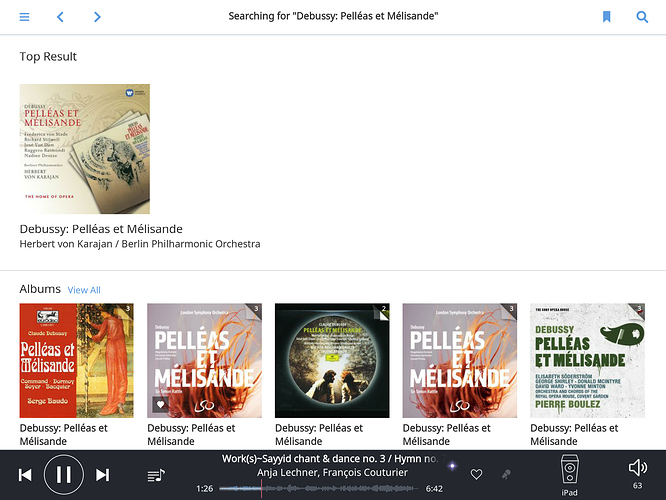 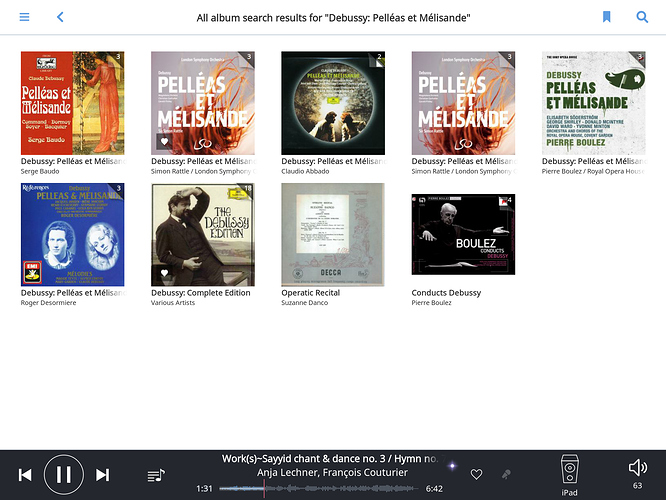 Hi @koen ---- Thanks for the feedback, the insight is always appreciated!

Moving forward, I am going to discuss with the team and see what we can do here

Hi @Eric, would be great! In this particular screen shot case it’s not even that disturbing, but I have many examples in which I have much, much more different performances (e.g. Bach’s cello suites and Schubert’s WInterreise), and it’s annoying but also illogical to miss one in the “Show All” view.

Now that we’re addressing this subject: what’s the criteria for making a certain performance a “Top Result” anyway? It’s not always one I’ve favourited. I have the impression that this is random, on the basis of which one is added most recently.

@Eric, now I think about it: I could miss the “Top Result” completely! Mostly, it’s a “recommendation” based on the album added most recently, often not even my personal favourite nor AMG’s, just taking up an entire row of precious space (see my first screen shot). So if you ask me, I would prefer deleting “Top Results” in its entirety.

Could this issue be revisited? It still seems odd that the top result is missing from “view all”.

@Grump and @lorin ---- I wanted to touch and offer a quick update on the behavior being mentioned in this thread.

A ticket has been submitted to our DEV team in regard to this observation that has been reported. While I cannot say for certain when this behavior will be addressed by our DEVs, I can however assure you that I will keep the thread up to date as the team passes along feedback to me.

Hello @Eric, thanks for chiming in. That’s a pity, I interpreted the wink in your first post in this thread as meaning it should be relatively easy to solve and that it would actually be solved

Sure hope it can be, even if it isn’t until the major UI update.

It’s not just bothering me when browsing/selecting music, but also when I want to edit my music (merge/unmerge/group albums). When Roon doesn’t identify an album and splits it, it’s impossible to get the Top Result and a “normal” album together in one screen to merge or whatever.

IMO the issue is an illogical flaw, inconsistent with the premium way Roon usually works. Could you shed some light on what makes it difficult to solve this, just to understand from a technical point of view? I’m actually surprised there are so few users noticing this.

IMO the issue is an illogical flaw, inconsistent with the premium way Roon usually works. Could you shed some light on what makes it difficult to solve this, just to understand from a technical point of view? I’m actually surprised there are so few users noticing this.

It’s not a technically challenging fix, it’s just not something that’s made it to the top of our backlog @Grump.

Every day, we make tough decisions about what we’re going to work on, and we have a lot of exciting changes in the works right now that are actively being developed every day. As I’m sure you know everything we choose to work on takes time, not just from developers but also from our QA team who need to confirm that the fix worked properly, and didn’t break anything else.

This issue is being tracked, and if we’re going to do other work on the Search Results screen, we would almost certainly pull this fix in as well, so we can test all the changes at once. That said, for the moment this isn’t causing widespread problems for our users, so it’s being prioritized accordingly.

The ticket remains open, and we appreciate your patience and understanding on this. Thank you!

Hi @mike, and thanks for your reply. I understand your explanation, just surprised there aren’t more users finding this an issue — especially given the fact that there are a lot of classical music lovers. But that’s not something you can influence