Something I don’t understand happens with the composition names of Vivaldi’s Four Seasons by Isaac Stern:

The work and part tags correspond to the ones displayed in Allmusic:
E.g., for the first concerto (Spring):
The WORK tag is: Violin Concerto, for violin, strings & continuo in E major (“La Primavera,” The Four Seasons; “Il cimento” No. 1), Op.8/1, RV 269

In Roon, if I set Multi-Part Composition Grouping to “Prefer Roon”, here is what I obtain: 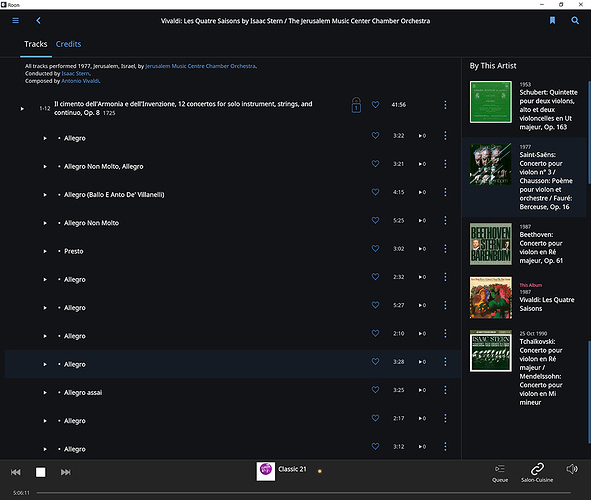 Because I prefer to have each part associated with its corresponding concerto (and not with the more general “Il cimento dell’Armonia etc” title, which does not separate the different concertos), I set Multi-Part Composition Grouping to “Prefer File”.

But strangely, this is what I obtain when I set Multi-Part Composition Grouping to “Prefer File”: 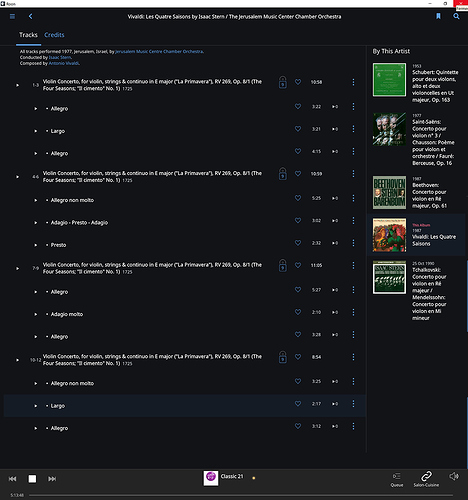 As you can see, each concerto is now separated, but has the same name (i.e., the name of the first concerto of The Four Seasons).
(of course, in the WORK tag, each concerto has its own title).

Any idea as to why this happens? Why doesn’t Roon reproduce the concerto’s name - for concertos nb 2/3/4 - from the WORK tag? And is there way to correct it?

Any idea as to why this happens?

Not really but it’s (unluckily) not uncommon that Roon struggles in cases where you want a different part grouping than the one Roon has in its metadata set. It drives me mad when I encounter such instances because I also don’t know how to untangle it easily or have forgotten how I did it the last time …

And is there way to correct it?

You could try to un-identify the album.

And/or: setting metadata preferences to use file (for all tracks of the album) could help.

The changes may at times be visible only after reloading the album = navigating to a different album and then come back to the album where you made the changes.

I unidentified the album, but nothing changed.
I also setted metadata preferences to “Prefer File” for all options. Nothing changed.
Then I wondered whether, in this particular case (for this particular album), Roon would have a problem reading the WORK tag (for an unknown reason) when I unidentify the album.
I wondered whether this problem could be due to the fact that the WORK tag contained the “default” name of the Vivaldi’s concerto (the name used by Roon in other versions of the Four Seasons).
So, I changed the WORK tag and entered for each of the concertos another (French) name.
For example, the WORK tag for the first concerto was:
“Violin Concerto, for violin, strings & continuo in E major (“La Primavera”), RV 269, Op. 8/1 (The Four Seasons; “Il cimento” No. 1)”
I changed it to:
“Concerto n° 1 en mi majeur, Op. 8, RV 269, “La primavera” (Les Quatre Saisons - Le Printemps)”
And so on for the three other concertos.
And then, after reimporting the album and unidentified it, surprise!
Here is what I get: 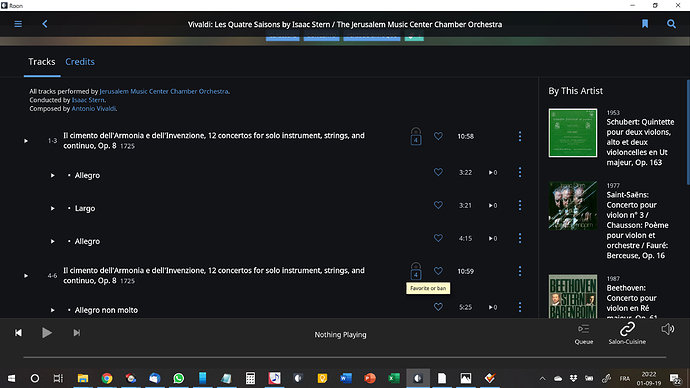 image.jpg3200×1800 643 KB
Each concerto is separated, but once again they all have the same name… but this time it is the one we can find in Allmusic for this album:
“Il cimento dell’Armonia e dell’Invenzione, concertos (12) for solo instrument, strings, and continuo, Op. 8”
This composition name is not in the file tags!
So, although the album is not identified (because I de-indentified it), there remains a link with Roon’s metadata, and Roon refuses to use the information written in the WORK tag (all the Metadata Preference options are setted to “Prefer File”).
My question is: why does Roon refuse to use the WORK tag in this particular case?
Rainer_Muller (Rainer) February 2, 2022, 8:15pm #6

This problem still persists. I’ve just run into the same symptoms with the recording by Gil Shaham and the Orpheus Chamber Orchestra. Exactly the same behavior.

Indeed, now and then this can happen. Sometimes the “work differentiation routine” kind of hangs up itself on a work and applies the first work of a “group” to all other works in the same group of similar but not identically named works. I’m quite sure it has not really to do with metadata (online or local) but an almost random mishandling of work names / work differentiation. As if Roon gives up too early / uses some kind of fuzzy logic where it should not.

I’ve even seen that the details menu of works shows the correct assignment - while the work itself is shown as being something else.

It’s possible to force Roon to retry by (more or less heavily) changing work tags / title tags. But there’s no guarantee this works and I couldn’t find out what will definitely trigger a new differentiation attempt in Roon; also, why changing the work tags of local files to something different than what I want them to show?

Unluckily, the workid field also doesn’t help here. A few years back I had hope that it could be used in this scenario but I believe that tag has no impact whatsoever.

Would be so kind as to post a screenshot of your actual Work/Part tags for the Haydn album above?

Do you have additional examples of this behavior from your library? We’d like to take a closer look at this to see if there’s a product bug that’s causing this.

I’ll be watching for your reply. Please feel free to @ my name so I don’t miss your response. Thanks!