It’s been a month already - when are we going see some movement from Roon regarding the votes?

As per @danny:
"We will periodically mark features with brackets [ ] in the title explaining if it is done or not on the roadmap."

What does “periodically” mean in more exact terms? Once a month? Once a year?

Does it even make any sense to use the voting system?

I do not see any of the top-voted feature suggestions recently updated with a clear indication if it is or isn’t on roadmap: 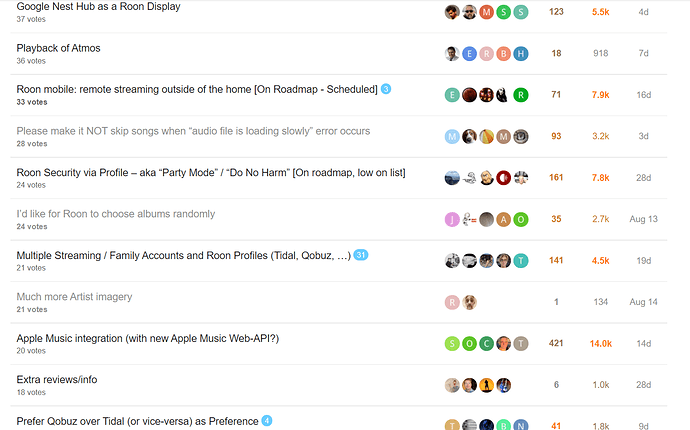 i think a voting-on-feature system is fantastic if - IF - things actually get implemented. this is a slow moving ship, so it’s not clear whether things are: not planned, planned but not executed, etc. as you say. i’d love a quicker turnaround on features personally. but, what’s new.

Do we ever get more votes if you use them up. Mine have all gone already.

I very much doubt whether there will be any increase in the number of votes you get. See:

Anyway, to answer the OP: There is value in having a limited number of votes, as one is forced to prioritize. We will not be increasing this number. You will have to choose wisely if your desire to vote exceeds your votes.

I have had to retract some then.

The way I look at the vote limit is, these are the top 5 or 6 features requests that are most appealing/potentially beneficial to me, at this time. If someone suggests something that is more appealing or important to me, than what I have already voted for, I retract the vote and vote for the new feature. If a feature I voted for gets implemented then that’s a vote I can use elsewhere.

I really hope Roon is not paying too much attention to the votes. Most of the top things voted for only apply to a subset of Roon users so whilst popular amongst a group won’t add any value to many people.

Theses are suggestions 2 to 5 on the voting and other top votes are similar.

I very much doubt they are just counting. The older version of the count was users adding +1 comments and they said they completely ignored those.
Cogent arguments and widespread usage AND most importantly it seems to me, fit with where they are taking the product rule the day.

Please remove forum voting limit. It’s way too low and it makes very hard for new features to get any attention.

This was worth a vote. I now have two left

And unless there is a response from Roon in the thread (On the Roadmap/Not on the Roadmap), you have no idea if your precious vote could be better used elsewhere.

However, unless there is a sensible vote limit, people would vote in a scattergun way, so Roon need some way to prioritise development work (assuming this is driven in some small way by the votes…).

Roon have already said they won’t be increasing the vote, the limit is by design, Danny clarifies here:

Voting on Feature Suggestions? - #31 by CrystalGipsy

Anyone voting for this idea is wasting their limited votes.

Anyone voting for this idea is wasting their limited votes.

Voting for anything is pretty much wasting a vote anyway…

A post was split to a new topic: When playing display all the cool information on the artist Bio rather that the just the lyrics

I see a few people who have retracted their votes. How do I do that? I can see my votes via Top-Right-icon/Preferences/Activity/Votes but I can’t find any way to retract a vote to free it up for something else. One of my votes is now attached to a feature that Roon has marked as “[done]” which makes it even more frustrating that I can’t work out how to reclaim that vote.

Tap the “vote” on the relevant thread again. You should see a box appear saying “remove your vote”