You could just edit the artists names within Roon. I do this for all soundtracks.

This will help you, especially the discussion of ROONALBUMTAG. You’ll need an external tag editor, though, such as for Mac.

I’ve been using Tag Editor for Mac. Which tag does Roon use to identify the Artist?

I’d suggest you don’t change artist tags, but rather add a ROONALBUMTAG with the folder name to each album track in that folder. For instance, I have a ROONALBUMTAG of “Bandcamp” for all the album (tracks) I get from Bandcamp, which allows me to focus on just Bandcamp downloads if I want to.

I’m always happy to help another Dead fan through a jam. My apologies for not seeing this until now.

The easiest thing to do to achieve what you want is to remove your Dead - Dicks & Daves Picks folders from that music folder and add them as separate watched folders.

Add Dick’s Picks as its own watched folder. And do the same for the Dave’s Picks folder.

Then when you want to see just your Dave’s Picks albums you’ll Focus your library by Storage Location>Dave’s Picks. From there you can create a Dave’s Picks and Dick’s Picks bookmark to make accessing them even faster.

Even better, when you add the albums in next year’s Dave’s subscription to the folder they’ll automatically be added to the bookmarked selections. 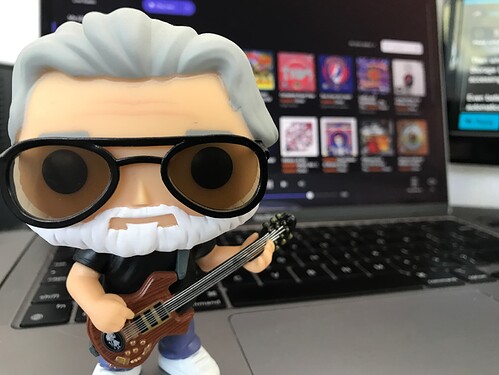 Funko Pop! Jerry thinks this is a cool idea also!