Was that ad somehow influenced by what was playing in Roon?

Listening to ROON on my MacBookPro today. After the album spun out, Roon Radio kicked in and after a few tracks, ‘Long Tailed Winder Bird’ came on from the the latest Paul McCartney album.

I’m not a McCartney Fan, or a Beatles fan in that I wouldn’t go out of my way to listen to his music and never actively participate in any online discussions etc.

In my browser, I opened up Reddit for some reading and was somewhat surprised to find this ad; 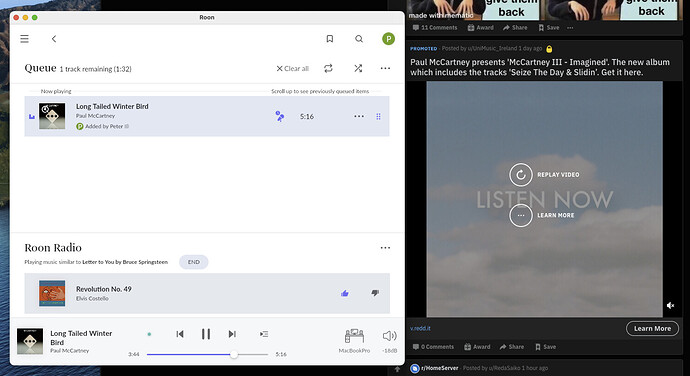 Mega coincidence, or was that ad somehow influenced by what was playing in Roon?

I know how ads work, and don’t believe ‘my phone is listening to me’ - as such, I was very very surprised by this.

Coincidence. And, not that much of a “mega” one at that. It is a new album which came out last Friday I think. Given that your seed track was Bruce Springsteen, Paul McCartney is certainly close enough.

Well, not such a new album, and certainly not released last week;

Of course, that’s not to say there isn’t a new ad campaign for it etc.

Why would the seed track have any influence on the Ad. shown? Andf if it did, surely its the same question? Of course the McCartney track is a justifiable follow on (Roon Radio is excellent), so no qualms there.

I’m just curious on what is, to me, a very big coincidence. I use Reddit a lot and never see targeted advertising - it’s always some gaming nonsense that I would have zero interest in. I’ve never encountered a music-related ad there before.

I’m also relatively new to Roon on this computer and use it rarely as its my work computer, so again, big coincidence (to me) to see an ad for an album from which the track is currently playing in Roon.

By the way, do Mods edit post titles often around here?

The number of times my wife and I have discussed something only to find adverts for the very same item appear on our mobiles shortly thereafter is uncanny. Funny enough, it’s happened more on iOS devices than my Pixel 2.

It happens too often to be a coincidence for my taste , same thing ONLY discussed never Googled !

I was listening to Jehovahkill by Julian Cope 2 nights ago, and about 30 minutes later 2 Jehovah’s Witnesses came to the door. Why would playing that album alert the Jehovah’s Witnesses? I’m not happy with the way Roon links in to other organisations like this.

That’s McCartney III you’re thinking of. The one in your ad is the remix album that came out last week - McCartney III - Imagined.

Thats me informed, so, I didn’t pick up on that at all. As I say, not really a McCartney fan so not bothered about releases.

Only reason I know that is because it popped up for me recently on an ad, which surprised me, because I too am not a McCartney fan and could not fathom for the life of me what I visited that would connect it to me

The number of times my wife and I have discussed something only to find adverts for the very same item appear on our mobiles shortly thereafter is uncanny. Funny enough, it’s happened more on iOS devices than my Pixel 2.

Do you have Siri/Alexa/Google devices in voice active mode?

Spotify seems to know what I have been playing from Roon. I hardly use it yet it’s adding things based on my recent listening eles where.