WAV files not appearing in Roon

I know this topic has been covered before, but there wasn’t a resolution. I also posted as a reply to an earlier thread, but haven’t gotten a response:

I’m having a problem with Roon indexing the WAV files located here (iTunes is able to play them, FYI): https://www.dropbox.com/sh/nvacmj1e2i9eaf3/AAByhFG5viI8z3wGZX8uhgQea?dl=0

I deleted your other post and we’ll use this thread.

I downloaded your WAV files and imported them successfully into my library. 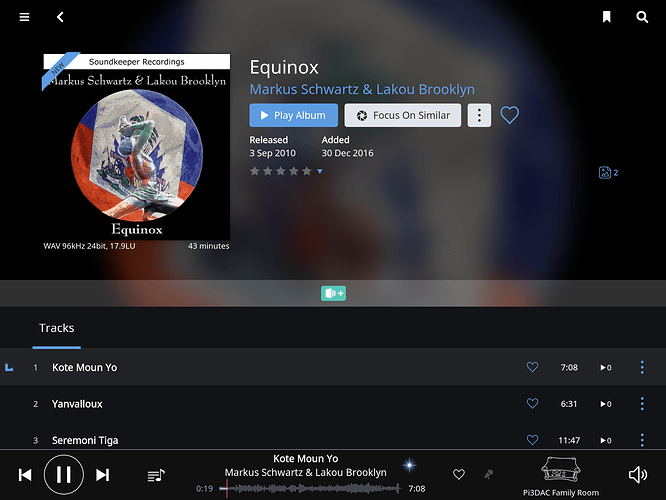 There isn’t much metadata available with this album, although it is Identified.

Have you tried restarting Roon (or Roon Server) core?

Where is your music located? Internal or External hard drive or NAS?

Very strange. It’s in a watched folder in Dropbox, replicated on the internal hard drive in the Mac mini, where all my music is located. Yes I’ve restarted but no luck. I also tried bringing it into iTunes and converting to ALAC, which Roon successfully located.

So you have it in your Dropbox folder as well as your internal hard drive, and they’re both being watched?

I would expect a duplicate of this album, not it being missing. Can you go to Settings > General and turn Show Hidden Albums to Yes and see if you can find it.

Is it still in your iTunes as well? If so and you view the ALAC version and click Other Versions, what do you see?

We may have to get @support to help out.

Not a duplicate. Dropbox replicates files on your local hard drive so you can access them when you’re offline. This is the folder I’ve set up as a watched folder.

With the ALAC version converted in iTunes, I moved it to the same Dropbox folder and it works fine. The WAV version still doesn’t show up.

I just tried showing hidden albums, no dice. And on the ALAC version there is no button to view other versions so it must not see any.

Ok, apparently this issue has been fixed in the upcoming version 1.3. You’ll have to wait for its impending release. I can’t give you a date though.

Let us know if it’s still an issue for you after the update.