We need to be able to sort MQA as high resolution

It appears to be impossible to build a focus on all high resolution material including MQA. At present I use:
Exclude Tidal
Exclude 44.1/48
as my high-resolution focus. But this excludes MQA even if the source and unpacked end result is 352kHz.

And if I try to focus on MQA, the high resolution options in focus disappear.

So my suggestion is that Roon either

This would allow focus to be more useful for MQA high resolution content.

I think the most straight forward method would be to treat MQA as a separate format, as is done for DSD/DSF. A high resolution focus would then select the 24 bit, DSD and MQA options in the Focus -> Format dialog.

Your suggestion has already been implemented, in that MQA is there as a format alongside DSD and DSF.

The problem is that MQA is treated as a standard-resolution format, so that this part of your post:

A high resolution focus would then select the 24 bit, DSD and MQA options in the Focus -> Format dialog.

…does not happen. When selecting “a high resolution focus” such as 192kHz, MQA disappears as an option, because 48-192 MQA files are treated as 48k resolution.

Hence my request, that MQA be treated as high-resolution (switchable - that part is essential because of people’s different hardware and MQA decoding possibilities).

This issue will not be apparent until more people have more MQA material, but then it will become urgently necessary.

The Format dialog layout and option hiding aren’t all too clear to me.
Wouldn’t it be more clear if the primary formats (PCM, DSD and MQA) were completely separated? The MQA decoding frequency can then be selected from the MQA section, and the encoding frequency from the PCM section. 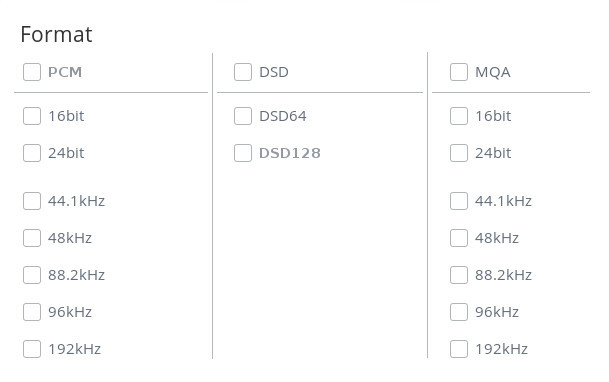