Weird behaviour of "Performed by"

This is a screen shot from the album “Thelonious Himself” by Thelonious Monk. It is a solo album, except for one track on which John Coltrane and Wilbur Ware are playing in addition to Monk. Can you tell which track it is? 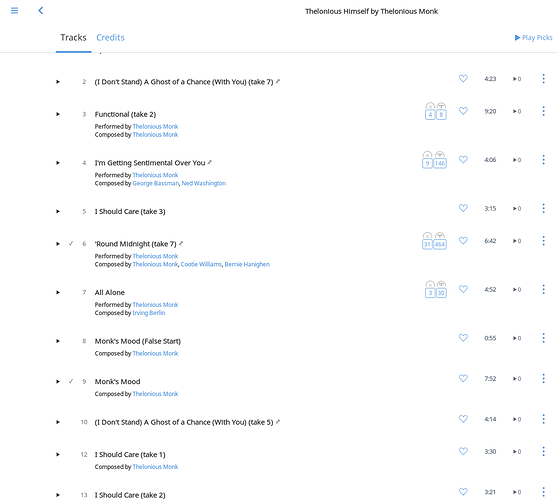 It’s Track 9, but you don’t see it. I would like to indicate the presence of Coltrane and Ware with a neat “Performed by” or “Also performed by”. But all I could do with the PERSONNEL tag (Role: Ensemble) is the above. “Performed by” is shown on all tracks that are identified as compositions, not on the others. Especially not on track 9.

The weird behavior of “Performed by” has been pointed out several times. The nonsensical way it is coupled to composition was addressed by @joel

It’s the ENSEMBLE tag (with the same name as the ALBUMARTIST and ARTIST tags) which is triggering the display of “Performed By”. In addition, it seems that we don’t display the “Performed by” unless we have a composer in our Cloud metadata.

I think it would be good to fix this issue and make the appearance of “Performed by” somewhat more predictable.