New Roon user here. I’ve noticed something odd with search results. Things with no discernible relationship to the query are being returned.

For example, a search for “The Decemberists” does indeed all Decemberists albums in my library, but also returns:

Another (much more insane) example, a search for Richard Thompson returns all of his albums, but also:

Can someone help me understand the logic here? Or is this a bug?

I believe it’s returning results for “The” and “Decemberists”. Just type Decemberists and avoid “The”, unless you’re searching for the band “The The”.

Ah, yes, you are correct. FWIW, I used the autocomplete function in the search box to choose “The Decemberists” after typing “dec”, so that’s a little confusing.

As to the “Richard Thompson” example, I’m guessing that somewhere deep the credits for all returned results there is someone named either “Richard” or “Thompson”.

Of course, Roon would search deeply in all of the available metadata. I suppose I’m just used to default search behavior (in Google, etc) of looking for ALL keywords, not ANY keyword. Also perhaps a bit strange to accept “The” as a keyword, but maybe that’s useful to some people.

Really pleased with Roon overall, and plan to subscribe after the trial runs out. Looking forward to seeing how things develop.

I’m experiencing something similar but more serious than the “The” issue (ha). Searching for “Jason Palmer” in my collection also returns one (but not all) Robert Palmer album. 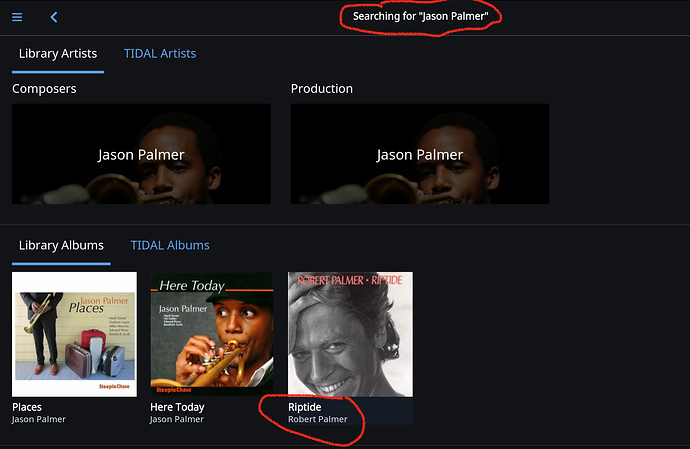 I don’t see a coincidental Jason Palmer in the Credits on the Robert Palmer album, but I do see a Jason Corsaro 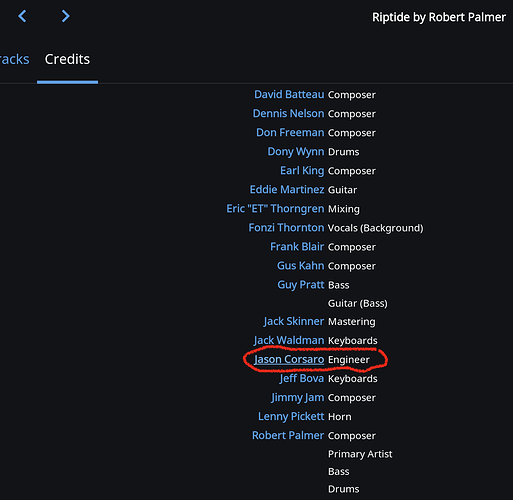 … and after I remove him from the Credits, the search results only show Jason Palmer albums , as I would expect. 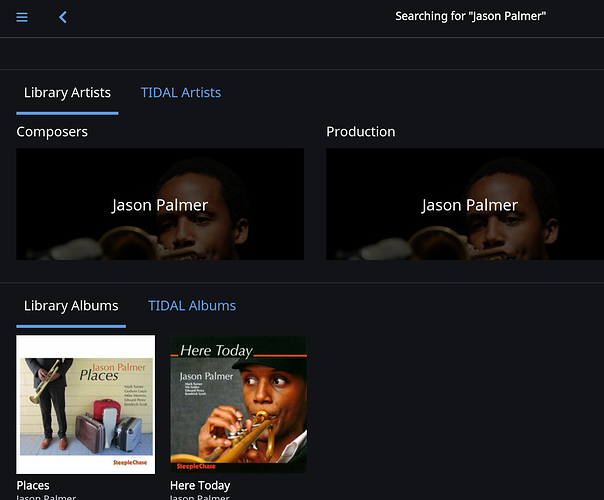 It appears that search is mashing together first names from the Credits with last names of Album Artists.

@support, on second thought I think this may belong in the Support category. I’m running Roon 1.4 (build 300).

We search all the words in the query. I would expect the person “Jason Palmer” to show higher in the results in than “Robert Palmer albums with people named Jason in the credits”, but the system is designed to show you all the relevant results.

For example, you can search for “Hell’s Bells”, and the top result is the track, but we also give you an album result, for the album on which Hells Bells appears. 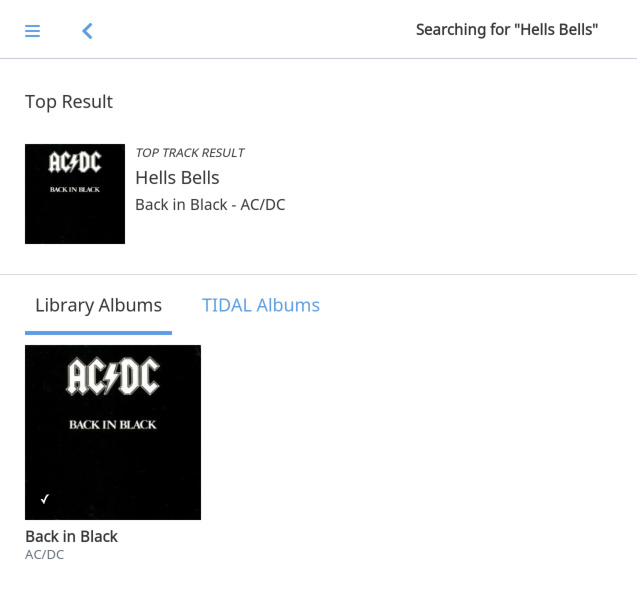 If you’re seeing a result you’re not sure about, it most likely because Roon is searching deeper than just album and track titles.

I see. That’s not what I expected, especially since the search seems to autosuggest “Jason Palmer” using title case and the top of the search results page says “Jason Palmer” in double quotes, not “Jason” “Palmer” or “Jason” OR “Palmer”. Perhaps I’m overthinking this…