What causes a track to get "stuck" at the end?

@support
Just to advise that this problem (getting stuck while playing) has occurred again today, so the latest Linn upgrade did NOT fix it.

While it was stuck, I looked on Linn Kazoo (their own software to control the Linn player). Instead of the track details it just showed “Roon”, so something has got screwed up. There was no play/pause button. When I skipped to the next track (using the Roon app) the Kazoo window correctly showed art, track details, and pause button again.

Thanks to letting me know that additional information and that the Linn update did not resolve this issue. QA is still looking into the possible root cause(s) but I have added your notes to the investigation in case it helps. As soon as I have any additional information to share I’ll be sure to let you and @G56 know.

I spoke to QA regarding this issue again today and we would like to gather some more information here, can you please provide the following?

OK. In today’s case it stopped just before playing Roon Radio (although I have also seen it stop when working through a playlist). Pressing skip track caused radio to start correctly.

Signal path, and tracks, are shown on screenshot as requested. 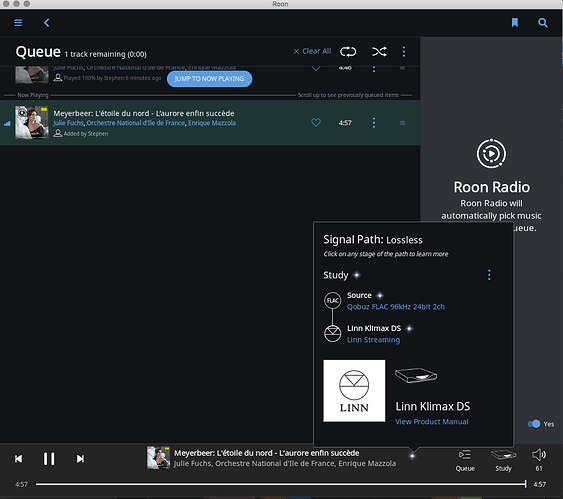 Roon does not have any DSP set up for this zone.

I have not yet encountered this on our Lumin zone, but it has happened a few times a day on the main Linn system.

I will get you logs as requested.

Thank you for providing that info, I can confirm that the logs have been downloaded and have been submitted to QA for analysis, you can go ahead and remove them from your server. As soon as I hear back from QA regarding your case I will be sure to let you know.

I appreciate your patience while I discussed this issue with the QA team. Unfortunately, the current diagnostics information we gathered is not sufficient to come to a conclusion on what causes this issue, so have we have gone ahead and enabled some extra debugging tools for your account in hopes of discovering new data.

Can I please ask you to reproduce this issue once more with the additional debugging turned on and let me know the exact local time of when it occurs next and re-submit the logs? I am hopeful that these extra debugging tools will provide some more in-depth information and as soon as we have this I can submit the logs again for QA analysis.

I have replicated this when playing from Roon to Linn Klimax DS:

In both cases the Roon app seems to think it is still playing. Pause/Play leave it in the same state; Skip Forward causes it to get on with Roon Radio’s next track.

Thanks for sending those log files over, I can confirm that they have been retrieved and I have uploaded them to QA for analysis. As soon as I hear back, I’ll be sure to let you know, you can go ahead and remove the two examples from your server.

I had a discussion with the dev team today regarding your case and they would like to see if we can reproduce this behavior in the lab. To make sure that we have the same conditions here, would you mind sending us the file that you were last playing? It appears that this file was:
Danse païnne, for 2 pianos, Op. 158 - Anne Sofie von Otter.

@noris
The track has been uploaded for you to my server (same place as before).

Thanks for uploading that track, I have downloaded it and attached it to your case with QA.
You can go ahead and remove the track now, I will let you know how lab testing goes!

I know it’s been a while since we last spoke, but I wanted to touch base with you here. QA has spent quite a bit of time trying to reproduce this issue in-house with the Linn Klimax we have for testing but have been unable to do so.

As best as we can tell, this issue might be triggered by something environmental on your end, weather it be the network, the firmware version of the Linn Klimax or another variable, it is hard to say.

Has this issue still been occurring recently or has it subsided? I would check to make sure your Linn is on the newest firmware version, and try to simplify the network setup as much as possible.

I wish I had better news here, but since this issue appears to happen randomly, figuring out what causes it can be a difficult process and it might be something environmental that does not often occur that triggers it, such as the network going down right when the next track is loading for a split second or something similar.

2 posts were split to a new topic: Tracks get stuck in the end with HQPlayer

May I just note that this issue is continuing to happen. It seems to happen very frequently when an album ends and the next track is selected from Roon Radio. But I have also seen it happen when moving from one Roon Radio track to another.

Have you perhaps had an opportunity to swap notes on this problem with Linn? I could contact their customer Helpdesk (they killed their online community forum) but the real dialogue should be technician-to-technician for which I assume a channel exists.

5 posts were merged into an existing topic: Sudden Playback issue

Having the same issue when I run my Roon Core on a windows 10 PC.

Raise a separate thread and add your system details.