What does Roon Radio actually DO?

Brian, wow, thanks so much for this incredible post. So enlightening. The mere fact that you took the time to write such a comprehensive explanation, and even more so on a Saturday afternoon, is a testament to how much you care about your user community. Respect and appreciation!

Lets look at all of the feedback items– 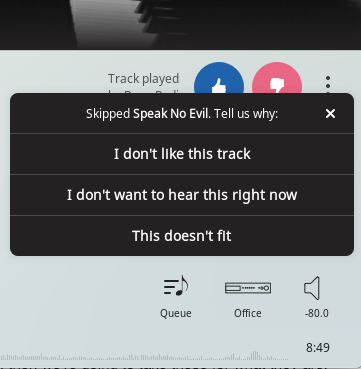 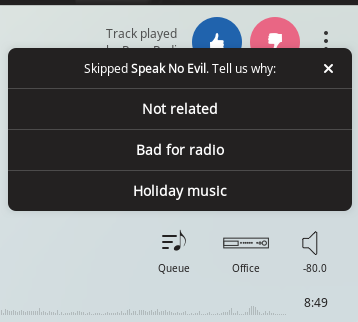 There is one kind of feedback that I think makes a lot of sense with respect to your personal profile–“I don’t like this” – if you pick that option, it seems logical that we would keep track of that with your profile and let it influence future behavior for you specifically, due to the way it was worded.

“Not Related”, “Bad for Radio”, and “Holiday Music” are impartial judgements. It would make no sense for us to interpret those as evidence of your personal taste because they are worded to express an opinion of the algorithm’s performance, not something about you.

“I don’t want to hear this right now” is worded deliberately vaguely to give you an escape hatch that lets you skip something without really influencing future behavior (personally or globally). It is basically equivalent to giving no/neutral feedback.

The now-playing thumbs-up and upcoming track thumbs-up are currently recorded, but we aren’t doing anything it them beyond that. I am honestly not sure how we will take them into account, aside from using them as a way to measure algorithm performance. If we do so, we will be sure respect the ambiguity in the user interface that can’t distinguish between “I like this track” and “I think this is a good pick”.

It’s not in our best interest to interpret your feedback in a way that isn’t true to the words on the screen at the time when you made the click…we even keep track of the software versions that go along with the feedback so that we can understand it in full context even if the choices change over time.

I think there is nothing to be anxious about here, but let me know if you feel otherwise…

I like the idea that songs from the cloud from artists and albums I don’t know are songs that have been chosen based on some intelligence over a genre focus & shuffle approach (i.e. they aren’t songs from the album that don’t match and get played the least from the monster data set and songs that aren’t good for radio like 30 second crowd clapping and spoken word intros prior to next track or 30 second instrumental intro’s to popular songs not attached or highly experimental songs that have data to support they are disliked for radio). If I am going to get introduced to a band like The Beatles for the first time I don’t want the track to be “Revolution 9” when my seed is some other 3 minute Beatlesque pop song. When I try a new artist on a streamer I tend to start with the most played tracks so it seems some of that type of intelligence combined with other is used to dish up a playlist.

NOTE: When I hear a new artist or album in Radio the first thing I do is exit radio now playing screen to see when the album was originally released, the AMG star rating and if the track was an AMG Pick track. If it was my local library I might try to see the back cover and any other art. I add new stuff I buy from reviews to my library and sometimes hear it for the first time in radio

Radio exploration is of special interest for the car so that alone is worth at least a $10 streamer (vs FM or SAT radio).especially if Roon goes mobile one day.

Thanks again. I’m getting a good handle on it. The anxiety was because of the unknown. I’ve been asking questions to reduce the unknown and your answers are as good as diazepam (almost

The anxiety came also from past experience (not PTSD level anxiety though!). Not Roon experience, but Pandora. After having thumbed up some tracks, I found them to repeat obnoxiously. Fortunately, they have a control panel where you can edit your thumb action and I got that straightened out. Don’t use Pandora much anymore now though!

I highly recommend you trial Tidal or Qobuz to try it out. It’s initiated by a single track or the last track you have in your queue finishes.

I intend to, once it’s available in California.

I think this question is based on classical thinking about database queries, which is not really how we do things today.

Yes, I’ve built these things myself, I understand what you mean. But what I want, for value, is “will it play a pleasing and surprisingly apropos series of tracks given the seed?” And I think it would have to be magical to infer what I want from a single seed. I think the thing to do with local radio is to treat the tracks as suggestions and then thumb-up and thumb-down until you have enough in your queue.

I hope that helped.

Yes, thank you, Brian. I appreciate the thought you put into your answer. Once Qubuz is available here, I’ll try the new radio. I’m sure I’ll appreciate it.

The anxiety came also from past experience (not PTSD level anxiety though!). Not Roon experience, but Pandora.

This makes sense as an explanation for where the anxiety is coming from. Then again, Pandora operates in a very different environment–they start by knowing nothing about you and have to learn everything they can learn from radio play. And anyone who uses it on lots of devices (car, tv, roku, computer, …) is likely not to even have a single login, so they are really prone to amplifying “noise” from a small number of interactions.

On the other hand…we start with your library, play history and favorites, and have a far better picture from the get-go. We will probably add some kind of initial taste profiling step to the onboarding flow in the app in the future to help “bridge the gap” for new users. This is less important for radio, because even if we don’t know about you at all, we can still organize picks around the seed. When we build more recommendations-oriented stuff, even something relatively straightforward like a “New Releases For You” list, it will be crucial to know something about you to get the out of box experience right for new users.

Anyways–we have much higher-quality sources of information about you than the radio thumbs. Pandora has no other choice but to amplify a few feedback interactions into a noisy picture. I view radio feedback as being primarily about improving the radio experience.

@Brian, you may have noticed that one of the distinguishing features of audio enthusiasts is their delight in the details of improving the SQ. Here, I’m wondering how to improve the sequence.

In 1.6, we don’t let you start radio on a focus because the intention behind that interaction is almost totally indiscernible. 1.5 did allow radio kickoffs on more combinations, but the results were super indistinct. You can shuffle anything of course–and that is really the best thing to do for random play on a focus.

Valid radio seeds today include artists, albums, tracks, and genres. These give us a clear “point in space” to organize picks around.

@Brian, you may have noticed that one of the distinguishing features of audio enthusiasts is their delight in the details of improving the SQ. Here, I’m wondering how to improve the sequence.

Step 1: use our newest/best stuff

. I know you’re waiting for Qobuz in the US…but there is more improvement in taking that step than in anything else you can do in the mean time.

thank you for the explanation, really appreciated.

I would like to check what you mean with

It is designed to learn from everything you do while it is active.

Does this mean that the learning algorithm learns from what I add to the playlist while the radio is going?

I asked this in a different thread

Does radio gets trained by what I add to the playlist or only by its own choices? For example, I start the radio with a seed and after a while Radio plays a song that remind me of another one, I decide to put it on the queue as next. Does radio register this and use this information at the same level as a thumbs up?

Hope I manage to explain the idea.

The stuff that you put in the queue does eventually make its way back into the data pipeline that feeds radio, but not quite in the way you are thinking. The fact that it is interspersed with radio tracks does have influence on what the algorithm learns. It is not analogous to a thumbs-up, but it is also more than zero-influence and more than the influence of playing the track on a different day.

The idea of recording a track added to the queue “at the same level as a thumbs up” would be bad data handling practice. To the extent that that things are recorded, we try not to discard information along the way–that has a way of poisoning the well. A thumbs up is a thumbs up. A track played in the middle of a radio stream deliberately is a different thing.

I feel a KB item , will there be one

This explanation is fascinating

And anyone who uses it on lots of devices (car, tv, roku, computer, …) is likely not to even have a single login, so they are really prone to amplifying “noise” from a small number of interactions.

Thanks for your great explanations regarding Roon Radio.
With reference to the above quote, I have a work core and a home core which I authorise/deauthorize as needed. Will Roon Radio learn my tastes from both core’s based on my logon details so that they affect each other or as separate entities?

They’ll affect each other. All of the taste stuff is based on your Roon profile–so if you have multiple people in the household using Roon, they can all be separate.

Is there a way to build a relatively short Playlist and then use Roon radio to expand it or fill it out? You can do something like that in Pandora by listing a group of artists and letting it build the playlist based on that grouping. Ideally, in Roon, I’d love to start with the simple playlist, turn to Roon radio and then add a third choice to the thumbs up/thumbs down which would be “add to my playlist.”

Not directly, you can play tracks and then select them from history and add to a playlist.

Does the new Roon radio functionality also apply to local only libraries (without Qobuz/Tidal) or does it only work with streaming services?

only streaming, it’s in the release notes.

Why does it only apply to streaming? I mean… I get that with a local library it’s not going offer tracks that are only on streaming etc… but it seems the new radio is a more learning/intelligent type of radio, so wondering why similar benefits can’t be (at least partially) achieved with local libraries as well.

So from a “quick” read of this thread the longer I use radio is will start to learn from me using the thumbs up/down ? Ive mentioned in another thread that radio has always worked well for me but 1.6 is pretty hopeless at the moment. I left it playing today and it was jumping around genres all over the place, the last three tracks were louis armstrong onto radiohead then bach?? I stopped it after that, I dont really want to spend time teaching it what it should be playing