What exactly happens when "remove duplicates" is selected?

How does it decide which one to delete or hide?

Roon defaults to display the highest resolution version of an album. You can change that default selection.

Can you be a little more specific about where you’re seeing that, @David_Rosenblum?

Where I’m seeing it is here and am hoping that if I click the remove from duplicates that both versions will then be shown even though the overall setting is not to show hidden tracks. 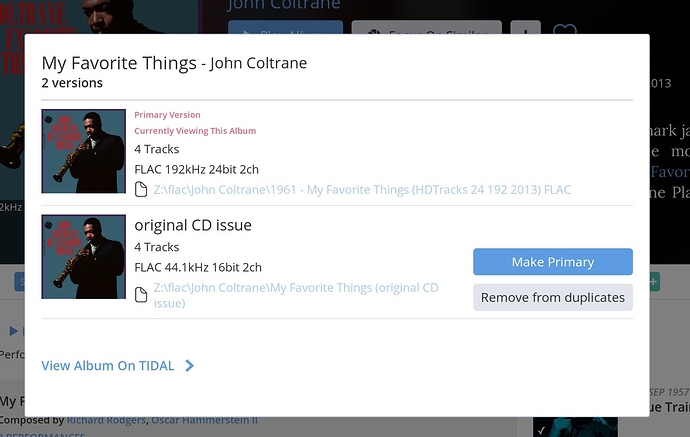 I could press and try it but I’m afraid something unintended might happen.

Sometimes hi- Res versions are different masterings and I may want to play one or the other.

The idea behind the feature is that no matter how many editions/versions of an album you have in your collection, you may only want to see a single cover for My Favorite Things when browsing your albums – you can pick your favorite version as the “default”, then access the others via the popup in your post.

That’s exactly what it will do, whether Roon flagged the albums as duplicates automatically, or whether you grouped albums manually.

From that am I to infer that one can manually link duplicates?
I came across a few albums last night that were showing up twice, Layla and Disraeli Gears, that displayed both 24bit and 16bit versions with identical metadata.
How would I link these?

Select both albums and edit them there will be an option to group them as a single album.