What exactly is 'Performers' under 'Focus'

Is this ‘artists’? because performers doesn’t exist as an option under the settings wheel on the tracks page - only artists. Nor do i see it in the file info for a song. It looks like artists - so why is it called performers? are performers and artists exactly the same thing in roon? 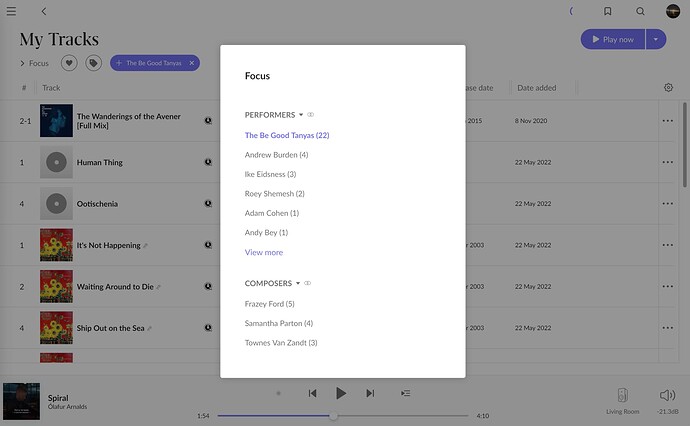 It’s anyone—individual, group, band etc.—who performs on a release. You’ll see them listed under credits on an album. So, if you’re looking at tracks, click the ellipsis and choose Go to…

so it is the same as artist then. silly and typical of roon to give the same thing 2 difference and confusing names.

This isn’t correct, it could be a background vocalist for example.

ok but why don’t we have an option to select ‘performers’ here: 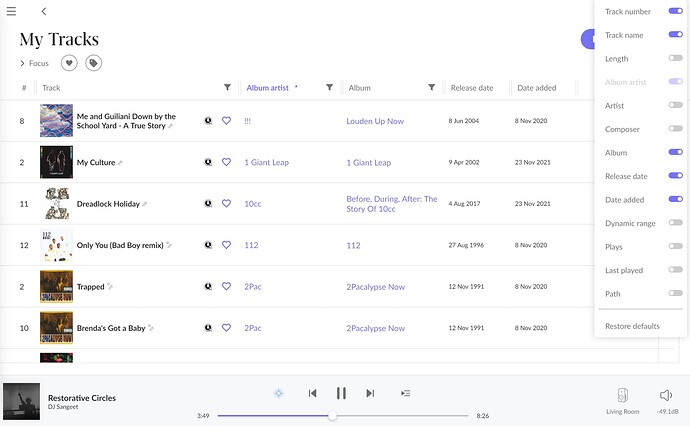 A massive assumption on my part but here goes. Focus is designed for the detail stuff or the more esoteric, like show me tracks that feature Ellen Foley - 'cause I want to include those that she was a backing vocalist on. The cogwheel is for setting what information you want displayed on that view … not a search or filter.

A performer can be anyone credited for performing on a release, so this includes the group or band, session musicians, and so on. That is, it’s not just the artist, but everyone who is credited for performing. Foe example, Michael Stipe performed on 10,000 Maniacs’ A Campfire Song or Sting on Money For Nothing. It’s particularly useful in Focus when exploring artist collaboration.

Another way to think about this – columns are for sortable information.

If you sort by release date, you know what’s going to happen – oldest first, or maybe newest first.

Same with sorting by track title, number of plays, etc.

This is slightly strange, but we’ll basically be sorting to “the name on the front cover” – sometimes that will be a single person and sometimes it will be a piece of text, like “Jerry Garcia and Friends”. In classical music this gets complicated, but you can generally understand where your content will sort to.

But @Zeki_Mustafa’s question was about sorting tracks by Performers. Roon has an extremely rich understanding of credits and performances, and “performers” means anyone who appears on the recording that’s not in a composer or production role (engineer, producer, etc).

And so where does a track like this even sort to: 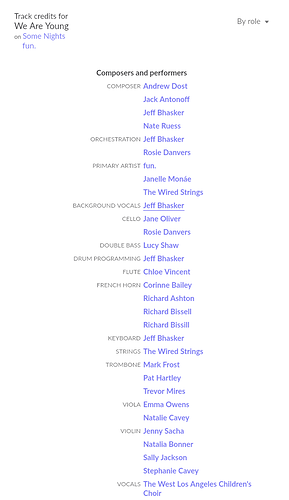 Long lists of credits are like the example above are pretty common, which means that sorting tracks based on all these credits doesn’t make a lot of sense.

Because of how this data typically looks, it’s much more sensible to sort tracks on Album Artist (or Artist in some cases) and to use focus for cases like “Show me any track with Jeff Bhasker playing keyboards”.