What happened to "Make primary version"?

All of a sudden I cannot make different version of an album “Primary”. If I have an MP3 version in my Library that shows as Primary Version. Prior to update I could click one of the various Tidal formats and default to the MQA version as primary in my library.

It seems losing this makes the whole idea of Roon go out the window. I can just stream directly from Tidal to my DAC and call it a day.

I hate to be negative - but I am not getting why 1.8 was done. It took something I was really learning to like and really enjoying on the discover side and made it complicated and kind of stressful. On the positive side I am listening to a lot more vinyl.

How can I get the ability to make a TIdal version primary back???

The making an album "primary’ option is still present in 1.8…
Before making a displayed TIDAL album Primary, you must first add it to your library.

Could you show screenshots a) before you are trying to make a version primary and b) after you’ve tried to make it primary?
I’m asking because normally you’d do this while you are looking under Versions for an album, and there seems to be some funkiness going on there.

Can you describe that funkiness? I just tested on ten albums and had no problems (iMac and iPhone)

Add it to your library first. If it’s not in the library section you cant make it a primary. You see two versions here and see the make primary link clearly. What are you seeing as nothings changed in 1.8 in this regard same as always.

What section are you looking at?

This: Adding albums - bug (Roon 1.8/764/778) - Support - Roon Labs Community
There are states where the album is in your library (as assessed by Album View) but Roon doesn’t show it under “X Library Versions”. It will be listed under Qobuz versions. So you can’t make it a primary version, that option isn’t available. Under some circumstances the Version will eventually appear as a Library Version and you can make it primary.
There is also the state where you simply add a new Version to your library and it automatically becomes the primary version while the previous version isn’t primary any longer.
I can do this all day long with a couple of Lianne La Havas’ albums. I don’t understand what the fundamental problem is, but it is absolutely easy to produce and very confusing. So I can understand where this could be an issue for a user in some situations.

Thanks, missed that one.

I can do this all day long with a couple of Lianne La Havas’ albums. I don’t understand what the fundamental problem is, but it is absolutely easy to produce and very confusing. So I can understand where this could be an issue for a user in some situations.

I think you are onto something here.
I do understand the add to library (no snarkiness intended “computer is plugged in”). I have had instances where in the version screen as in the screen shot above I now have two local library versions (MP3 and FLAC) as well as 2-3 TIDAL versions. That lovely blue “Make Primary is no where to been seen”
I have a couple instances (I think) where it then does appear.
I am off my home network (gosh I wish Roon would work offline). But I will send some detailed screen shots.
I am 98% sure this is not me understanding how Library works. I did this 100s of times in the past 4 months – its just a new quirk I am noticing exacerbated by some recent new version uploads to my local music.

Not experiences that one. Another one of the many 1.8 bugs.

That lovely blue “Make Primary is no where to been seen”

More tips on how to recognize this quagmire:

I have not figured out how to actually make the version I want Primary in these instances. If you just add the new Version, Roon may tell you its Primary, but if you switch to view the previous version it will tell you that one is Primary.

I’m so sorry to only reply now and for the trouble you’ve ran into with primary versions. Is this still the case? Can we help

Hi @rebeka, I too am having the same issue… It is not with all albums, just some randoms. IE: there are two library versions of the album depicted in my attached screenshots… yet I do not have the option to make the streaming version the Primary version over the locally stored copy… Please see both screenshots below. 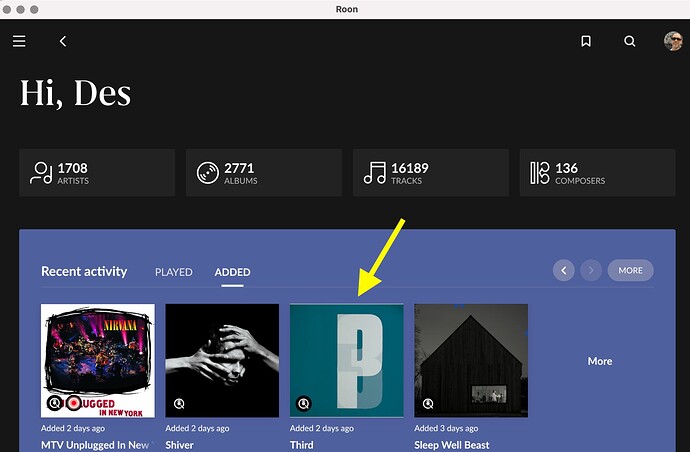 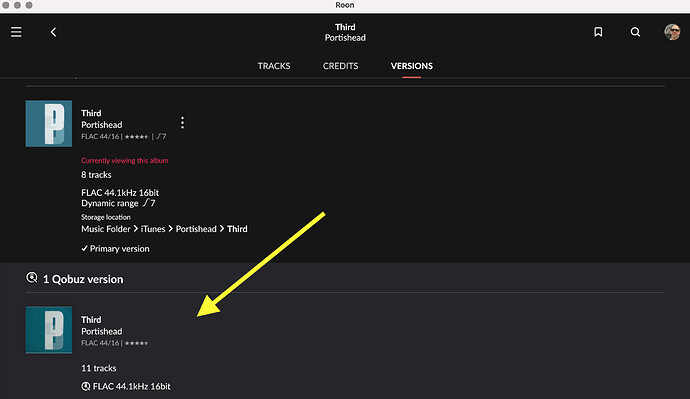 It seems this album is ‘victim’ of the situation noted above (see post 11, #2). You have two versions, with one a different release (one 8 tracks, the other 11 tracks).
Until Roon fixes the versions issue, you might try removing the album that’s current Primary Version (8 track local), and making the remaining the 11 track release the Primary Version. Not ideal at all, but it may be a bandage.
Note that if you remove a local track from you library IT WILL BE DELETED FROM THE DISK! So consider the consequences of this potential work around.

Yes. It appears to be the same scenario as others have noted. Hopefully Roon is aware of this issue. I have since noticed other albums in my library which I am unable to make as primary versions.

In the example I shared, it’s actually the exact same album… My library version just doesn’t have all the tracks. As I do not want to delete my local copies, I will patiently await a fix from Roon.

@support any progress here? it’s pretty frustrating especially as I have many albums with different version/release (like the enclosed)
many thanks

They are different releases with different track counts, Roon will treat them as such unless you use Group alt versions to make them grouped as one. It will only group automatically same releases of an album. Nothing is broken here, Roon is doing what it’s designed to do present the user with all the different releases and versions.

To group them select both albums in album view, edit and select group alternative versions. Or in the mobile app you have the group all button to the right which will group all the album versions together. But to perforn any of this the versions need to be in your library.