I have the full range of multichannel options from the HDMI output of an Odroid C2. Direct from a NUC running ROCK I only have 2.0.

@Henry_McLeod, which distribution are you using with the C2? So far I’ve been unsuccessful with multichannel on the Odroid…

I have an Intel NUC7i5BNH (actually with the motherboard transplanted into an Akasa fanless case). It’s running ROCK, and I get a 7.1 multichannel connection with my Denon 3808 AVR via the HDMI connector.

I use DietPi on the C2 running nothing but Roon Bridge. However it does expose the full 5.1/7.1 capability in the drop down menus during config. I do not get that running ROCK on a 5i5MYBE but that is the board with twin display port sockets, no HDMI. In hindsight that may be the reason.

That’s interesting, @Henry_McLeod. I tried that last week and Roon was throwing errors both in 5.1 and 7.1 configuration. Any chance you can run an uname -a for me, so that I know if I am running on the same kernel version?

Will do when I get home.

This sounds very intriguing and an excellent solution! A couple of questions, if you don’t mind:

My current settings are shown below. Because the Denon does not support DSD format, I’m using the “convert to PCM” option. I’ve also set an upper limit on the PCM sample rate and the bits per sample, because the defaults didn’t seem to work. These could be raised further, I think, but I haven’t bothered to do much experimenting. 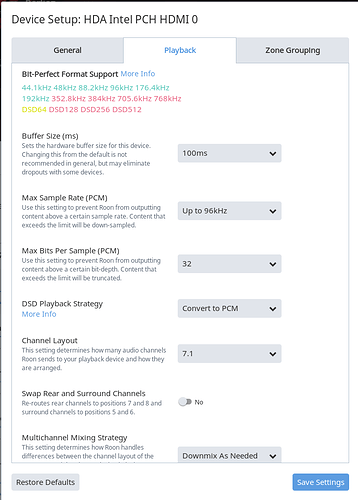 At the moment, the music files are stored on a separate server running Windows 10 Pro. This server is used to hold other media files for the home cinema setup.

The Roon Core system in the Akasa case does actually have an internal 1TB drive installed, and I will get around to using this once more for the music files (as I originally did when it was in a previous generation NUC using Roon Server running under Windows 10 Pro). I just haven’t completed the move across to the new ROCK-based system as yet.

Not sure why you’ve been told it’s not advisable to store files on the NUC, I see no reason not to.

My DSD files are stored on my NUC. My PCM files are on a NAS. There are no ill effects, DSD sounds as it should and I don’t have the burden of big DSD files transiting my network.

Thanks much Geoff. You too Henry! Boris - any luck with the Odroid? Or maybe you’ll try straight out of the NUC as well? …I think I’ll give the HDMI from the NUC a try myself, unless someone has a better suggestion! (I don’t really see any drawbacks with this solution, however. It’s a lot less expensive than even the cheap options that Kal Rubinson has been reviewing!)

Did you have any chance to look at the kernel version, @Henry_McLeod?

weird. that sounds familiar. will need to give it another try then.

Do you have any special settings @Henry_McLeod? I am running the same here, and I get

in Roon. In RAATServer_log.txt I get

Can you also run an aplay -l for me, @Henry_McLeod? I am getting

HDMI 2.0 exceptions may exist, but as a general rule of thumb, HDMI supports up to 24 bit 192 kHz PCM and 2.8224 MHz DSD (DSD64). On the DSD front, many A/V components support native DSD input/output via HDMI, while many computers do not. Computers may support DoP DSD output via HDMI, while A/V components do not. Best practices for HDMI, thus, are to use PCM and cap sampling rates or upsampling to 24 bit 192 kHz.

I was wondering if there has been any further development in using Odroid C2 / dietpi / roonbridge PCM muiltichannel into an AV receiver (in my case that would be an Onkyo PR-SC5507 and a Primare SPA23). Can anyone confirm this works?